By Matthew Tempest | EURACTIV.com with Reuters

Libyan Prime Minister Fayez al-Sarraj, leader of the internationally backed Government of National Unity, said "Libya will do its best to relieve the pressure on the Italian coast." [European Commission]

Libya’s western-backed Prime Minister has complained that his country is only receiving “very small amounts” from the EU, ahead of a key summit on the central Mediterranean migration route on Friday (3 February) in Malta.

Fayez al-Sarraj held a day of meetings in Brussels on the eve of the summit of 28 heads of government, meeting with Foreign Affairs chief Federica Mogherini, Council President Donald Tusk and Jean-Claude Juncker, President of the Commission.

But in a joint press conference with Tusk, al-Sarraj said: “”We hope that the EU mechanisms to help Libya will be more practical. We are not going to mention the amount of money that are dedicated to Libya for this help because they are very humble, very small amounts.”

At a later joint statement with Mogherini – delayed for nearly an hour – the foreign affairs chief refused to put a figure on possible extra financial help.

She told reporters only that the EU would “explore possible further support” – likely at tomorrow’s summit in Valletta, at which the Libyan PM will also be present.

The EU’s foreign affairs council also meets on Monday back in Brussels, with Libya again on the agenda – specifically, the migration situation, and a review of the political situation one year after the formation of the so-called ‘Government of National Accord.’

Mogherini confirmed she and the Libyan PM had discussed continued EU support to Libya but laid a notable emphasis on improving current aid, as much as increasing it.

She told reporters: “We discussed also ways to improve, not only to increase potentially the support but also to improve the disbursement of our financial support, make sure as prime minister mentioned very rightly that not only the money is transformed into projects – which is happening – but also that the projects are run in a way that benefits directly Libyan citizens.”

That suggests a possible note of caution about the effectiveness and reach of the Libyan government.

Al-Sarraj’s government is struggling to establish control in Tripoli and beyond and is contested by various factions, including by the powerful warlord Khalifa Haftar in eastern Libya, who is increasingly being courted by Russia. 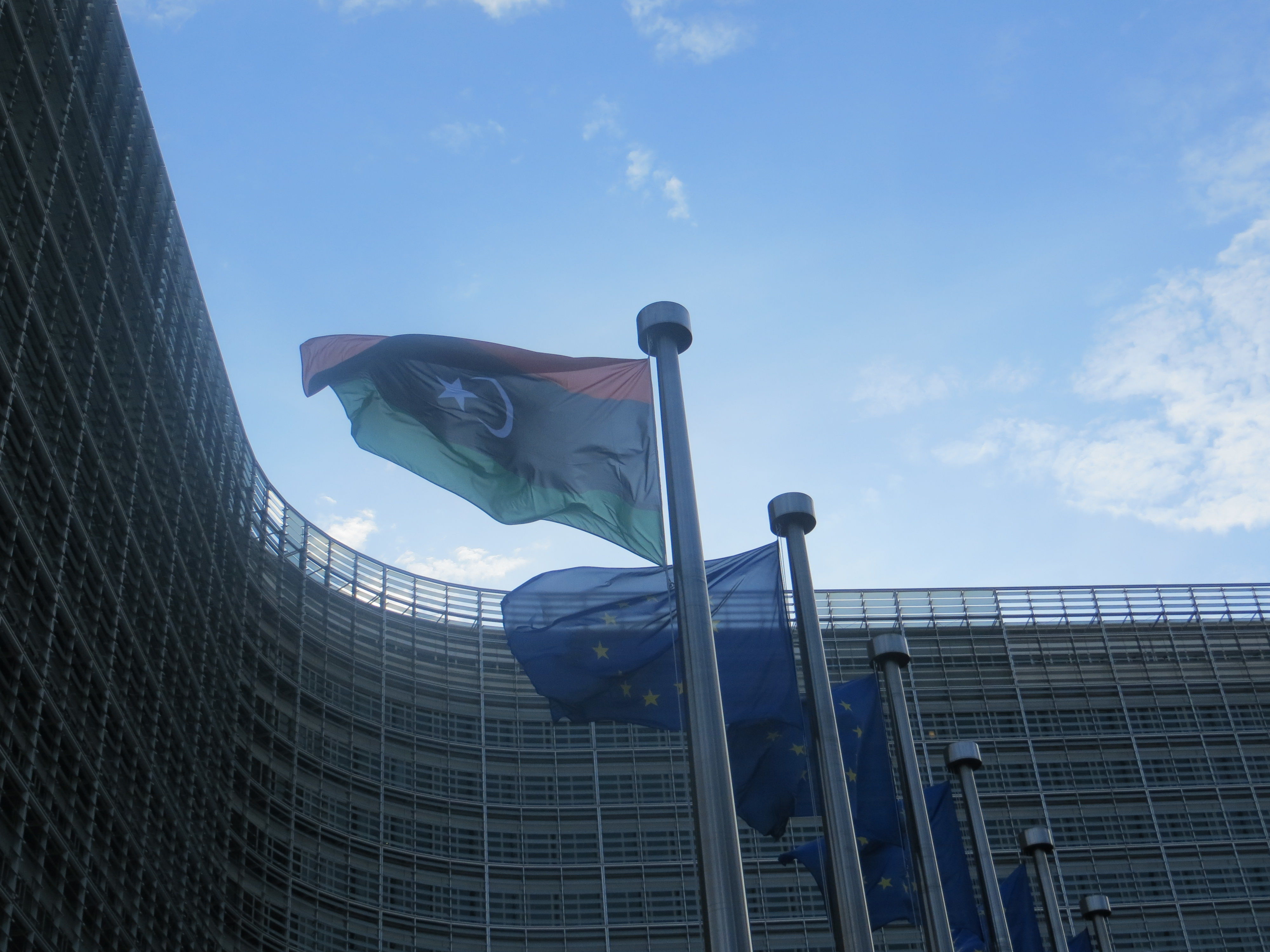 The Libyan flag flying outside the EU Commission on Thursday, 2 February. [Matt Tempest/Flickr]

The EU is stepping up the training of Tripoli’s coast guard and offering more money and aid to Libya and other African countries to seal their borders so migrants seeking better lives in Europe do not get through.

But Sarraj, after his meeting with Tusk – who will chair the EU summit in Malta on Friday – said this was not enough.

“We hope that the EU mechanisms to help Libya will be more practical. We are not going to mention the amount of money that are dedicated to Libya for this help because they are very humble, very small amounts,” he said.

The EU has not given a figure for aid to Libya, but it is expected to be only a fraction of the 6 billion it pledged last year to Turkey in a deal that slashed arrivals of refugees and migrants from the Middle East to Greece.

The deadly route across the Mediterranean is now the main gateway to Europe, with some 181,000 arrivals in 2016. It is run by smugglers who operate with impunity in Libya, which slid into chaos after the overthrow of Muammar Gaddafi in 2011.

But getting a migration deal with Libya is difficult.

Tusk, however, appeared, more optimistic, saying: “Europe has proven it is able to close down irregular routes of migration.

“Now it is time to close down the route from Libya to Italy … It is within our reach. What we need is the full determination to do that.”

Neither Al-Sarraj nor Juncker spoke to the press as Al-Sarraj arrived at the Commission on Thursday morning.

Global aid agency Oxfam criticised the bloc’s push on Libya on Thursday, saying it amounted to “further abandoning the rights of migrants, including refugees.”

“Plans to cooperate more closely with Libya are a deliberate outsourcing of migration control to the conflict-riven country where migrants are at great risk of abuse and even death,” it said in a statement.

“European leaders are throwing money at authorities in war-torn Libya without the necessary checks and balances,” it said.

The bloc is looking at whether it can give funding to the UN refugee agency UNHCR and the International Organization for Migration (IOM) to improve conditions for refugees and migrants in the camps in Libya.