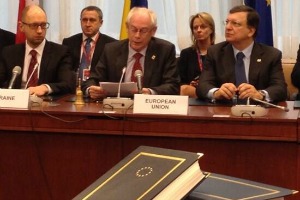 Contrary to convention, the signing ceremony was not broadcast live. Nor was the “doorstep statement” by Yatsenyuk to journalists afterwards. Despite huge media interest, a proper press conference was not organized, and journalists were squeezed in a small space, trying to hear Yatsenyuk, who was not given a microphone and had to shout to make himself heard.

Van Rompuy called the signature a “gesture”, recognizing the aspirations of Ukrainians “to live in a country governed by values, democracy and the rule of law”, as well as “the popular yearning for a European way of life”. He didn’t mention, however, their aspiration to join the EU, in spite of the fact that the refusal of the previous pro-Russian President, Viktor Yanukovich, had unleashed a pro-European revolution in the country.

Regarding the economic and trade elements of the AA, Van Rompuy said those would be signed “soon”, without elaborating. It is assumed that in spite of Ukraine’s wish to sign the AA in full, Brussels has decided to “reassure” Moscow, concerning the consequences of the pact for the Russian economy. Additionally, Brussels is reported to not want to give too much political capital to the present government, which was hastily appointed by parliament, and is not seen as fully representative of the country, especially the Russian-speaking east, and south.

Van Rompuy also conveyed the message that the Ukraine's path towards EU integration was a long one, in which the AA would serve as a “compass”.

Yatsenyuk said that this was a historic day for Ukraine, adding that he hoped it was a historic day for the EU too. He didn’t mince words, stating that Ukraine’s ultimate goal was to achieve full-fledged membership. Yatsenyuk commented that his country faced many challenges, including a military one, and that this pact would “show to the entire world” that the EU is with Ukraine.

The Ukrainian leader said that he realised that a “bumpy road” lay ahead, but added that his job was to deliver on the people’s expectations.

“Let me commemorate this who gave their lives for this treaty too, and for our freedoms and liberties, and for our European future”, Yatsenyuk stated. He added that he was sure that Ukraine would be “a positive showcase” after this signature.

The AA was signed by Van Rompuy, Commission President José Manuel Barroso and the 28 EU heads of state and government.

Facing the press a few minutes later, Yatsenyuk was asked how Europe should tackle Russia in the energy front. He said the most important thing was that the whole of the EU, including Ukraine, would speak to Moscow with a united voice, in order to prevent Russia from using energy as “a new nuclear weapon”.

Yatsenyuk commended those EU countries which spoke in favour of economic sanctions on Russia.

“It’s up for everyone to decide: do we share value, or do we share values”, he stated, in reference to the reticence of several EU countries to adopt harsh sanctions, out of fear of Russian retaliation.

“God knows the final destination. Is it Ukraine, or is it the EU? What’s happening to the world today? What’s up? Russia decided actually to impose a new post-Cold War order? And to revise the results of the Second World War? This is the truth,” he exclaimed.

Last night, EU leaders agreed to broaden the list of Ukrainians and Russians, whose assets will be frozen, and whose freedom of movement in the European Union will be restricted as a response to Russia's annexation of the Crimean peninsula, bringing the total number to 33. A so-called "third stage" of sanctions is now also in the pipeline [more].

The heads of state and government gather in for March's EU Summit - their last gathering before the European Parliament elections on 22-25 May.

Key topic is the escalation of the conflict in : following the outcome of a referendum in Crimea on leaving , the EU and the imposed sanctions on a number of Russian and Ukrainian officials early this week. Russian president Vladimir Putin defied the nsanctions and showed he is unlikely to lash control over the peninsula causing a fear of further escalation.

Apart from discussing a way out of the crisis in , EU leaders will also conclude the first phase of the European Semester; discuss industrial competitiveness; debate the Commission's latest version of the proposal for the 2030 energy and climate package; and prepare an EU-Africa Summit to be held in early April.