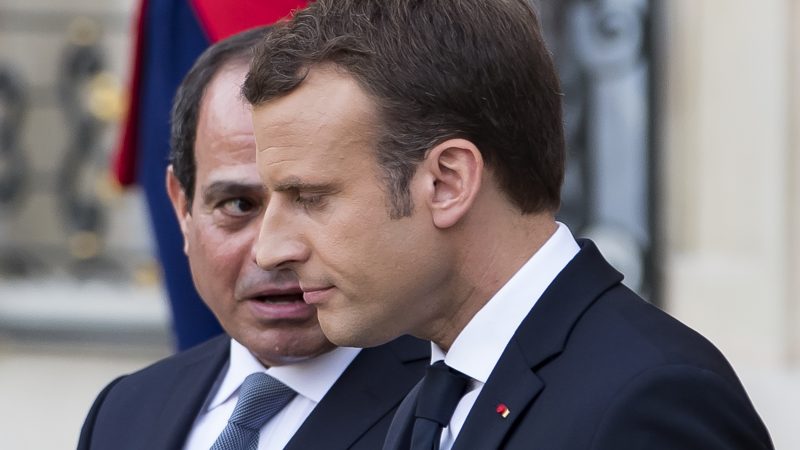 France’s President Emmanuel Macron spoke with Egyptian leader Abdel Fattah al-Sisi about the situation in Libya calling for a ceasefire “very soon” between the warring sides, the French presidency said on Sunday (4 August).

“Stability and durable peace go together with respect for individual dignity and the rule of law, and the search for stability cannot be dissociated from the question of human rights,” Macron said during a joint press conference with Sisi, which was dominated by Egypt’s domestic power abuses.

France in recent years has become the biggest supplier of arms to Egypt, which purchased French fighter planes, warships and a military satellite in a deal worth more than €1 billion as well as a €5.2 billion deal in 2015 for the purchase of Rafale fighter jets, missiles and a frigate.

Macron has previously faced increasing criticism at home over his silence on Egypt’s human rights records.

Most recently, a crackdown on a labour rights movement at an Egyptian Navy shipyard building battleships in partnership with a French defence company.

Following a meeting with Sisi shortly after his presidential election victory, Macron told reporters it was not up to him to “lecture” his Egyptian counterpart on human rights abuses.

Sisi defended his administration’s actions, saying that “Egypt does not advance through bloggers. It advances through the work, effort and perseverance of its sons,” he said.

Macron and Sisi discussed Libya “with the aim of backing the United Nations’ plan for a ceasefire very soon and a renewed dialogue” between Libya’s Prime Minister Fayez al-Sarraj and strongman Khalifa Haftar, the presidency said.

UN envoy Ghassan Salame has proposed a ceasefire for the Muslim holiday of Eid al-Adha, which starts around August 11, and has called for relaunching negotiations.

Nearly 1,100 people have been reported killed since Haftar, based in eastern Libya, launched an offensive against the capital Tripoli on April 4.

Paris has been seeking to position itself as a mediator in the Libyan crisis, fearing its destabilising effects on the Sahel region of Africa.

Egypt, a key backer of Haftar, is concerned about the conflict as it has a long border with Libya.

“There is no military solution to the crisis in Libya,” EU’s foreign policy chief Federica Mogherini said in the statement on Friday (2 August).

The European Union also called for Libya’s warring sides to establish a permanent truce and return to UN-led talks to prepare for quick elections.