French President Emmanuel Macron warned of the risk of “conflict” in the standoff with Iran after Tehran announced plans to boost its uranium enrichment capacity as Europe scrambles to save a beleaguered nuclear deal.

At a press conference with visiting Israeli Prime Minister Benjamin Netanyahu yesterday (5 June) the French leader called on “everyone to stabilise the situation and not give into this escalation which would lead to only one thing: conflict.”

He said that the Iranian decision to expand its nuclear infrastructure did not constitute grounds for quitting a 2015 deal designed to stop Iran getting a nuclear bomb.

The deal hangs by a thread after the US withdrew last month — a move applauded by Iran’s arch-foe Israel — but so far fellow signatories France, Britain, Germany, China, Russia and the EU, have stood firm.

In a rebuke of the US pullout Macron said that Iran’s riposte “simply shows that when you decide to unilaterally end an accord it does not encourage the other party to respect it.”

Netanyahu, who has vigorously opposed the accord, said he had not attempted to convince Macron to abandon it.

“I did not ask President Macron to leave the deal. I think that economic realities are going to decide this matter,” he said, referring to the prospect of renewed US nuclear sanctions on Iran, and the repercussions for European countries that continue to do business in the Islamic republic.”

“What we focused on, and what I focused on, is how to stop Iranian aggression in the region,” he added.

He claimed Tehran was using the “cash bonanza” from sanctions relief to build up its forces in Syria and using the war-torn country as a platform for attacks on neighbouring Israel.

Accusing Tehran, a Shia power, of a plan to flood Syria, a mainly Sunni country, with fighters he declared: “What that will do is spark another religious war, another civil war… and where will the refugees go? They’ll go to one place, to here (France) or to Germany or to Europe.”

On Monday, he had issued a similar warning to Germany’s Chancellor Angela Merkel.

Netanyahu has been emboldened by Trump’s decision to pull out of the deal — and the threat of reprisals against foreign firms that do business in the US who choose to remain in Iran.

His meeting with Macron was the third between the pair in Paris in a year.

It came hours after Iran said it had notified the International Atomic Energy Agency that it would soon open a new centre for producing new centrifuges to increase its uranium enrichment capabilities.

Nuclear chief Ali Akbar Salehi said the moves were allowed under the accord, and “do not mean the negotiations (with Europe) have failed”.

In a video posted on social media, Netanyahu reiterated his claims that the new enrichment capacity was aimed at producing nuclear weapons “to destroy the State of Israel”.

‘No cause for celebration’

Netanyahu’s European tour comes as relations between Israel and the European Union show signs of strain over the killing of 123 Palestinian protesters in Gaza by Israeli forces since March. 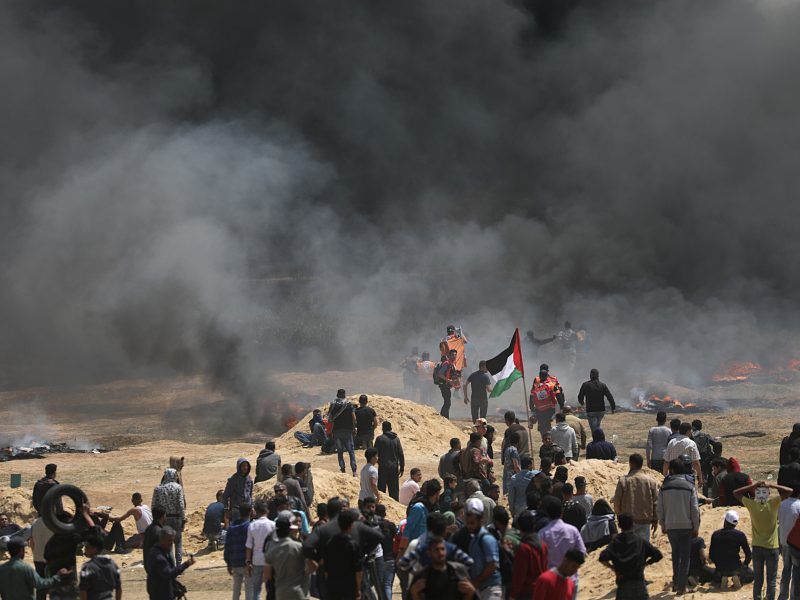 The EU raised questions Saturday (7 April) about whether Israeli troops engaged in “proportionate use of force” in the latest border clashes that left nine Palestinians dead in the Gaza Strip.

Macron on Tuesday repeated his condemnation of the violence against civilians while noting Israel’s security concerns.

Several hundred protesters took part in protests against Netanyahu in cities across France, with three journalist unions calling his visit “intolerable” after the killing of Palestinian journalists.

Ahmad abu Hussein, a Palestinian journalist (wearing a press jacket) was shot and killed by a sniper who used a “dum dum” bullet. #GreatReturnMarch #GreatMarchOfReturn https://t.co/A3kXRcMaBP

Against the backdrop, attempts to broker an end to the Israeli-Palestinian conflict have fallen to the wayside, not least after Trump broke with decades of protocol by recognising Israel’s claim of Jerusalem as its capital.

Macron took a swipe at the US, which opened its new embassy in Jerusalem on the same day dozens of Palestinians demonstrators were killed in Gaza.

“When you celebrate such an event and there are people dying I do not consider it cause for celebration,” he said.