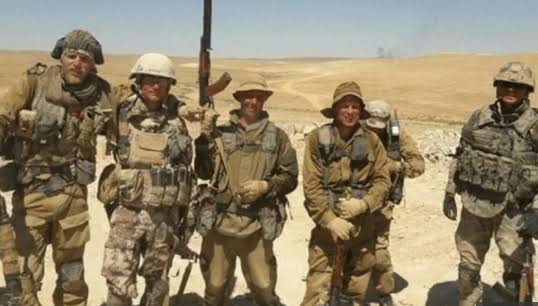 The European Court of Justice this week slapped down an attempt by the boss of the Russian mercenary firm, the Wagner group, to be removed from an EU sanctions list. [Twitter]

In a report, the rights group suggested the alleged massacre perpetrated over four days, in the town of Moura in volatile central Mali, was a war crime.

#Mali: @HRW investigations revealed that over the course of several days in late March, Malian army forces and foreign soldiers – identified by several sources as Russians – executed in small groups several hundred people who had been rounded up in Moura. https://t.co/LJ4uyChZnT

Malian soldiers and white foreign fighters arrived in the town by helicopter on March 27 and exchanged fire with about 30 Islamist fighters, several witnesses told Human Rights Watch (HRW). Some jihadists then attempted to blend in with the local population.

Over the ensuing days, Malian and foreign fighters allegedly rounded people up and executed them in small groups.

HRW estimated that about 300 people were killed in total, with the vast majority of the victims being ethnic Fulanis.

“The incident is the worst single atrocity reported in Mali’s decade-long armed conflict,” the report said.

Mali’s army said on Friday that it killed 203 militants in Moura. However, that announcement followed widely shared social media reports of a civilian massacre in the area.

Faced with the multiplication of testimonies reported by the press, the army issued a new statement late Tuesday, dismissing the “unfounded allegations” which it said were aimed at “tarnishing the image” of the armed forces.

Without referring specifically to HRW, it reiterated that respect for rights was “a priority in the conduct (of) operations” and called for “restraint against defamatory speculation”.

The United States, European Union, United Nations and Mali’s former colonial power France have all raised concerns about the possible killing of civilians in Moura.

AFP was unable to independently confirm the Malian armed forces’ account or the social media reports.

HRW’s recent report attests to fears of a mass civilian killing in Moura, however.

The study was based on interviews with 27 people, including witnesses from the Moura area, foreign diplomats and security analysts, the rights group said.

“The Malian government is responsible for this atrocity, the worst in Mali in a decade, whether carried about by Malian forces or associated foreign soldiers,” said HRW Sahel Director Corinne Dufka, who urged an investigation.

Several witnesses and other sources identified the foreign soldiers as Russians to HRW.

Investigation by Human Rights Watch reveals Mali's armed forces killed around 300 civilians over five days last month. Eye witnesses say soldiers were helped by a group of Russian-speakers who are believed to be Wagner mercenaries pic.twitter.com/mvNigDlgXS

Russia has supplied what are officially described as military instructors to Mali, an impoverished country that has been battling a brutal jihadist conflict since 2012.

However, the United States, France, and others, say the instructors are operatives from the Russian private-security firm Wagner.

Mali’s ruling military, which seized power in a coup in August 2020, denies the allegation. It also routinely defends the rights record of the armed forces.

The Malian army, in its statement published on Tuesday evening, said troops had attacked a group of “terrorists” and engaged them in heavy fighting.

Once control of Moura was secured, the soldiers identified more “terrorists” hidden among the population, it said.

The statement mentioned military casualties but said nothing of any foreign soldiers.