Recent uprisings in the Moroccan region of Rif have transformed the city of Melilla, a Spanish enclave in Morocco, into an exit route for persecuted people seeking refugee status in the EU.  EURACTIV Spain reports.

Beni-Enzar, the main border crossing point between Morocco and Spain in Melilla, is equipped with an office to deal with asylum claims to the EU. The majority of applicants come from war zones in Iraq and Syria, getting to Morocco after a long trip across the continent, but in recent months there has been a surge in Moroccan applicants from Alhucemas, the Moroccan city at the epicenter of upheavals in the Rif region, about 100km from Melilla.

“The Moroccan police are allegedly looking for them,” lawyer Rafael Gámez, who works with the Spanish Police force on the treatment of asylum seekers, told EFE.

Protests in the Rif region started in October 2016. Since then, almost 200 activists have been detained, demanding more development and growth and denouncing the “militarisation” of their region.

“They’re scared, or are wanted for participating in peaceful demonstrations affirming their rights,” the lawyer said after assisting one of his clients in the office run by the Spanish Police.

“They’re arriving here out of fear of reprisals,” he added.

Gámez explained that to obtain political exile protection “they must produce evidence of their active participation in the protests”, be it pictures, videos or publications, as well as “prove that they’re wanted” in their country.

This is what Moheim did, after leaving Alhucemas and choosing his moment to enter Melilla.

“I can’t use my passport to get in,” he told EFE, for fear of being stopped at the border by Moroccan authorities. He had to cross “amongst many people, thanks to people’s help”; in the midst of the bustle of goods carriers entering Melilla.

The young man, who did not disclose his identity to prevent Moroccan authorities from identifying him, alleged that “they’re looking for activists”.

“They’re torturing them, and doing many bad things,” he added. This, he said, explains why fugitives are seeking asylum in Europe through Melilla, which together with Ceuta – the other Spanish enclave in Africa – is the only EU land border in this continent.“If you want to speak up, you have to go out,” Moneim concluded.

However, he complained that having obtained this protection does not guarantee him a ticket to Europe and is afraid he will have to spend “one year or one and a half years here, without being able to leave [Melilla]”.

The activist argued that, whereas refugees of Syrian nationality spend only a few weeks in the Spanish city before being sent to other regions in mainland Spain, people from  the Maghreb region, such as himself, feel they’re trapped in an endless wait.

“Melilla is not a place to settle.” He wishes to get to Europe without waiting “such a long time, which I could spend doing many other things: this is about my future”. 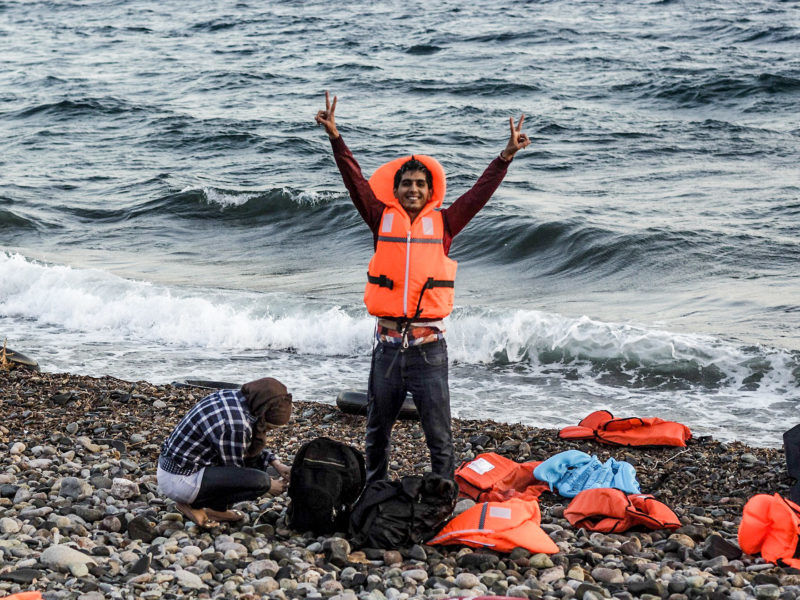 The European Union’s population increased last year, despite the same number of births and deaths being recorded. Eurostat, the EU’s statistics office, said the bump was driven by migration.

He also fears that Moroccan authorities could “send someone” to return him to Morocco “as if nothing had happened”. He is counting on some friends to help him find a job to send money back to his parents and three brothers that he left behind.

Official data do not single out the number of refugees coming to Melilla from the Rif region amongst the nearly 1,300 asylum requests received since the beginning of the year, but organisations like CEAR (the Spanish Commission for Help to Refugees) say they amount to at least a dozen.

An apparently small number, but “every person from Alhucemas is an activist, all want rights”, Moneim argued.