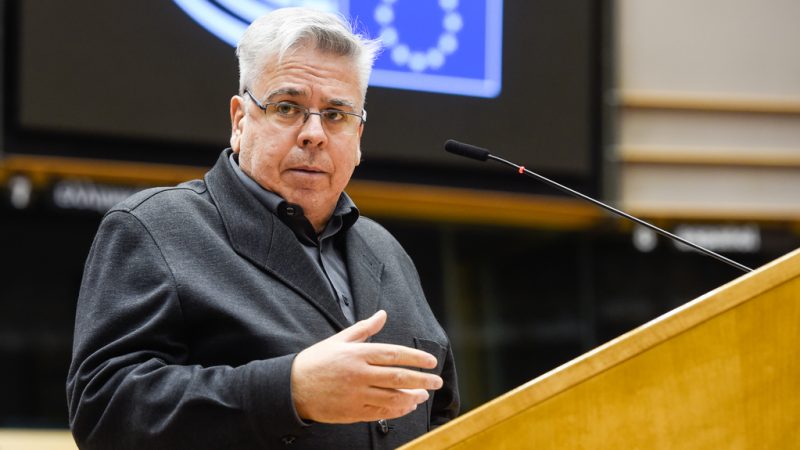 All aspects of the EU’s relationship with Turkey should introduce the question of democratic conditionality, a leading MEP has told EURACTIV.

The European Commission and Council presidents will on Monday (26 April) discuss relations with Turkey with the European Parliament, ahead of this week’s resumption of Cyprus reunification talks and after US President Joe Biden’s landmark acknowledgement of the Armenian Genocide.

In a report adopted last week by the European Parliament’s foreign affairs committee (AFET), EU lawmakers said EU-Turkey relations have reached “a historic low point” and the country’s EU candidacy should be formally suspended if Ankara continues on its “autocratic track.”

“This report is probably the toughest ever in its criticism towards the situation in Turkey,” MEP Nacho Sanchez Amor (S&D), a centre-left Spanish EU lawmaker, who led parliamentary discussions.

“It reflects all that has unfortunately happened in the country in the last two years, in particular in the fields of human rights and rule of law,” he added.

Amor said the EU Parliament is “very disappointed”, as in the last months the Council offered a positive agenda to Turkey without any reference to domestic issues and the rule of law.

“After a couple of months they were the same and finally, we received with satisfaction that in the press conference Commission President Ursula von der Leyen raised clearly the issue,” he said.

According to Amor, civil society in Turkey felt completely abandoned by the EU when the Council offered a positive agenda to Turkey without mentioning the crackdown on pro-European and pro-democratic groups.

“There was a feeling of despair because they only hope they have to try to resist in that atmosphere of the public life in Turkey is the pressure of the European Union,” he said.

“I said to my Turkish interlocutor: Did you notice what were the reasons for which Volkswagen decided not to invest an enormous amount in Turkey – it was because of the rule of law,” Amor added.

Greece and Turkey recently launched much-awaited exploratory talks. However, they disagree on the agenda of the talks, as Greece only discusses maritime zones’ pending issues while Turkey wants to put everything on the agenda, including the demilitarisation of Greek islands.

Contacted by EURACTIV.com, a Turkish official said that from the geographical, legal and historical point of view, relations between Turkey and Greece in the Aegean Sea and in wider Eastern Mediterranean are all inter-related.

“That is why we cannot isolate one issue from the rest. Therefore, we believe that we have to approach them holistically and strive to advance in the talks by taking into account the ramification of one issue over the other,” the official said.

However, Ankara does not seem happy that the EU is involved in its bilateral issues with Greece.

“Although Greece keeps trying to use the EU as a leverage, we believe that our differences could only be settled by engaging in a meaningful bilateral dialogue. At the end of the day, [the] EU cannot solve our bilateral issues, only we can achieve a solution as two neighbours by sincerely and effectively utilising dialogue mechanisms which already exist,” the Turkish official said.

On the other hand, Athens insists that the EU should be involved.

“We are an EU member and as EU officials have repeatedly stated, the Greek interests are EU interests too,” a Greek diplomat told EURACTIV.

Critics suggest that a lot will depend on the stance that Biden will take in a number of upcoming high-level meetings in June. The new US administration seems to be focusing on the rule of law aspect as well, and analysts estimate that will put further pressure on Turkey.

On 14 June, a NATO summit will take place in Brussels where meetings on the sidelines are expected between Biden, Greek Prime Minister Kyriakos Mitsotakis and Recep Tayyip Erdoğan.

Analysts also say while the rule of law is high on Biden’s agenda, the US wants in no way Turkey to get closer to Russia, whose relations with the West have escalated in recent months.