Textiles account for 80% of Bangladeshi exports but working conditions in the trade are poor. [Asif Islam/Shutterstock]

European Lawmakers yesterday (27 April) sent an unequivocal message that the EU must do more to ensure the clothes it imports are produced in decent conditions, adopting a non-binding resolution on the subject by a massive 505 votes to 49, with 57 abstentions. 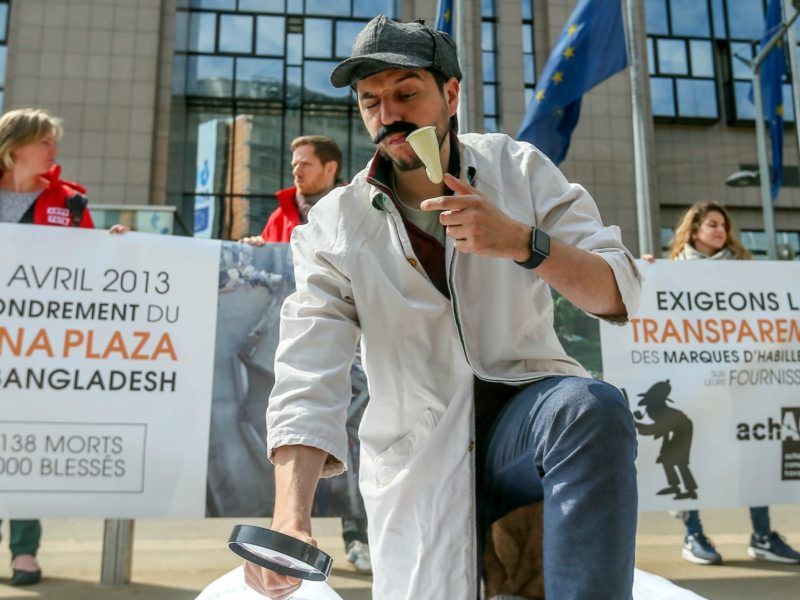 The time has come for the European Commission to develop a smart mix of rules for the garment industry to avoid tragedies like the collapse of the Rana Plaza, writes Hélène Mambourg.

This, they hope, will be the start of positive change in a sector where human and workers’ rights are routinely ignored, with violations ranging from unacceptably low pay to forced labour and dangerous working conditions.

“Workers in the textiles sector […] work hellish hours,” said Belgian Socialist MEP Marc Tarabella. “In Bangladesh, 47.5% of workers work between 60 and 98-hour weeks, and 75% work more than 48 hours per week.”

According to the resolution, despite a number of voluntary initiatives in the sector, working conditions have not improved. The situation is most serious in developing countries.

A year after the Rana Plaza building collapse that killed 1,135 people in Bangladesh, the European Commission is mulling a new initiative to boost labour standards for global companies that supply Europe’s high streets, as a flagship for Europe’s Year of Development, which begins in 2015.

“A set of binding rules would guarantee that the products sold on the European market do not violate the dignity and the rights of millions of workers. The EU has the ability to act and we call on the Commission to take appropriate measures,” said Spanish rapporteur Lola Sánchez Caldentey (GUE/NGL group)

Faced with the scale of the situation, lawmakers demanded that the Commission include the principle of respect for workers’ rights in its trade deals with third countries.

But above all, the resolution is a call for the executive to take binding action on European importers, following the model of the recent law on conflict minerals, obliging them to perform appropriate due diligence on their supply chains.

Obligation to try, not to succeed

Current due diligence laws oblige European importers to do their best to ensure that their foreign subcontractors respect human rights and labour laws. But while a certain amount of oversight now exists, importers cannot be punished for the abuses perpetrated by their suppliers.

This technique of enforcing corporate responsibility was employed by the Commission to regulate the use of conflict minerals in Europe, to ensure that products sold in the EU were not funding armed conflicts.

And similar to its proposal on conflict minerals, the EU executive appears to favour a system of voluntary oversight for the textiles sector. MEPs were later able to strengthen the conflict minerals legislation on its passage through parliament, turning it into a much stricter, binding law.

In the aftermath of the 2013 Rana Plaza tragedy in Bangladesh, which saw more than 1,100 people crushed to death when a textiles factory collapsed in the capital city Dhaka, the Commission had promised far-reaching legislation.

Since then, however, progress has stalled. In May 2014, the Commission adopted a communication on the responsible management of global supply chains and the commercial practices of European companies in developing countries. But once again, these were non-binding measures.

And there is nothing in the legislative pipeline to suggest this will change any time soon. In February, the Commission said it was awaiting the results of talks in the European Parliament “to take note of the report in detail”.

The April 2013 collapse of several garment factories in Bangladesh was the third deadly incident in six months to raise questions about worker safety and labour conditions in the poor South Asian country, which relies on garments for 80% of its exports.

Germany is the main EU market, followed by the UK, Spain and France.