MEPs prepare the ground to cut ties with Russia’s parliament 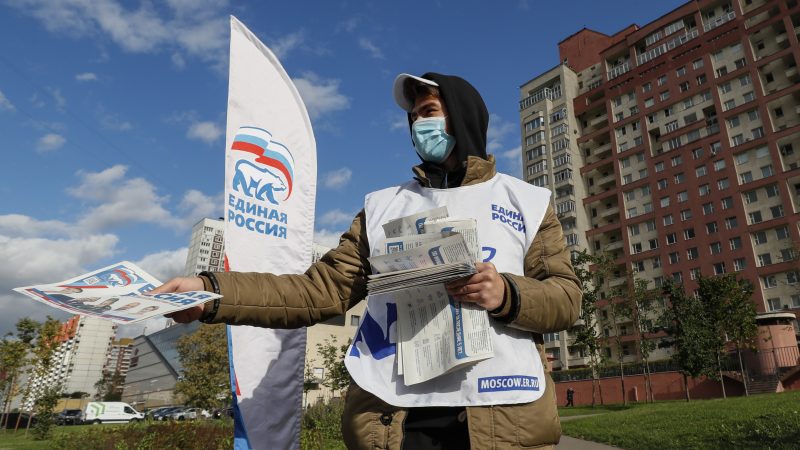 An activist hands out brochures and newspapers of the United Russia party in Moscow, Russia, 15 September 2021. Elections of deputies of the State Duma, heads of 12 constituent entities of the Federation, and elections of deputies of legislative bodies of state power in 39 constituent entities of the Russian Federation, will take place on 19 September. However, according to the decision of the Central Election Commission, the elections will be held between 17 and 19 September 2021. [EPA-EFE/YURI KOCHETKOV]

The European Parliament passed a resolution on Thursday (16 September) making a clear distinction between the Russian people and the regime of President Vladimir Putin, which it described as a “stagnating authoritarian kleptocracy led by a president-for-life surrounded by a circle of oligarchs”.

The resolution, approved by 494 votes to 103, which came on the eve of a three-day vote to elect a new Russian parliament, states that a democratic future for Russia is possible and that the European Council must adopt an EU strategy for this scenario.

“If this week’s parliamentary elections in Russia are recognised as fraudulent, the EU should not recognise the Russian Duma and should ask for the country to be suspended from international parliamentary assemblies, including the one of the Council of Europe,” said Andrius Kubilius, the Lithuanian MEP who drafted the resolution, following the vote.

However, Russia’s ruling party is expected to secure a resounding victory, although the voting conditions may fall short of democratic standards. Lawmakers demanded that the EU be prepared to withhold recognition of the election results if they are conducted in violation of democratic principles and international law.

The Parliament said the EU must establish an alliance with the United States and other like-minded partners to counterbalance the efforts of Russia and China to weaken democracy worldwide and destabilise Europe’s political order. This broad alliance should foresee sanctions, policies to counter illicit financial flows, and support for human rights activists.

On Russia’s aggression and influence on the EU’s eastern neighbourhood, the EU must continue to support ‘Eastern Partnership’ countries like Ukraine and Georgia and to promote European reforms and fundamental freedoms in the region. These efforts should also serve to encourage Russian support for democratic reforms.

The text added that the EU needs to cut its dependency on Russian gas, oil, and other raw materials, at least while Putin is in power. The European Green Deal and the boosting of new resources will play a crucial geopolitical role in achieving this, it said.

MEPs want the EU to build its capacity to expose and stop the flows of dirty money from Russia and to expose the resources and financial assets that autocrats and oligarchs close to the regime have hidden in EU member states.

“[The EU] needs more courage in taking a strong stance vis-a-vis the Kremlin regime when it comes to defending human rights; this is what strategic engagement with the Russian people is all about. It is about ending domestic repression, returning the choice to the people, and freeing all political prisoners,” said Kubilius.

“The Kremlin’s continuous repression of all opposition candidates, free media and NGOs undermines the legitimacy and fairness of these elections. The Russian people must have the right to choose and their choices must be honoured, as in any other democratic country”, he added.