Merkel and Hollande bring peace plan to Kyiv and Moscow 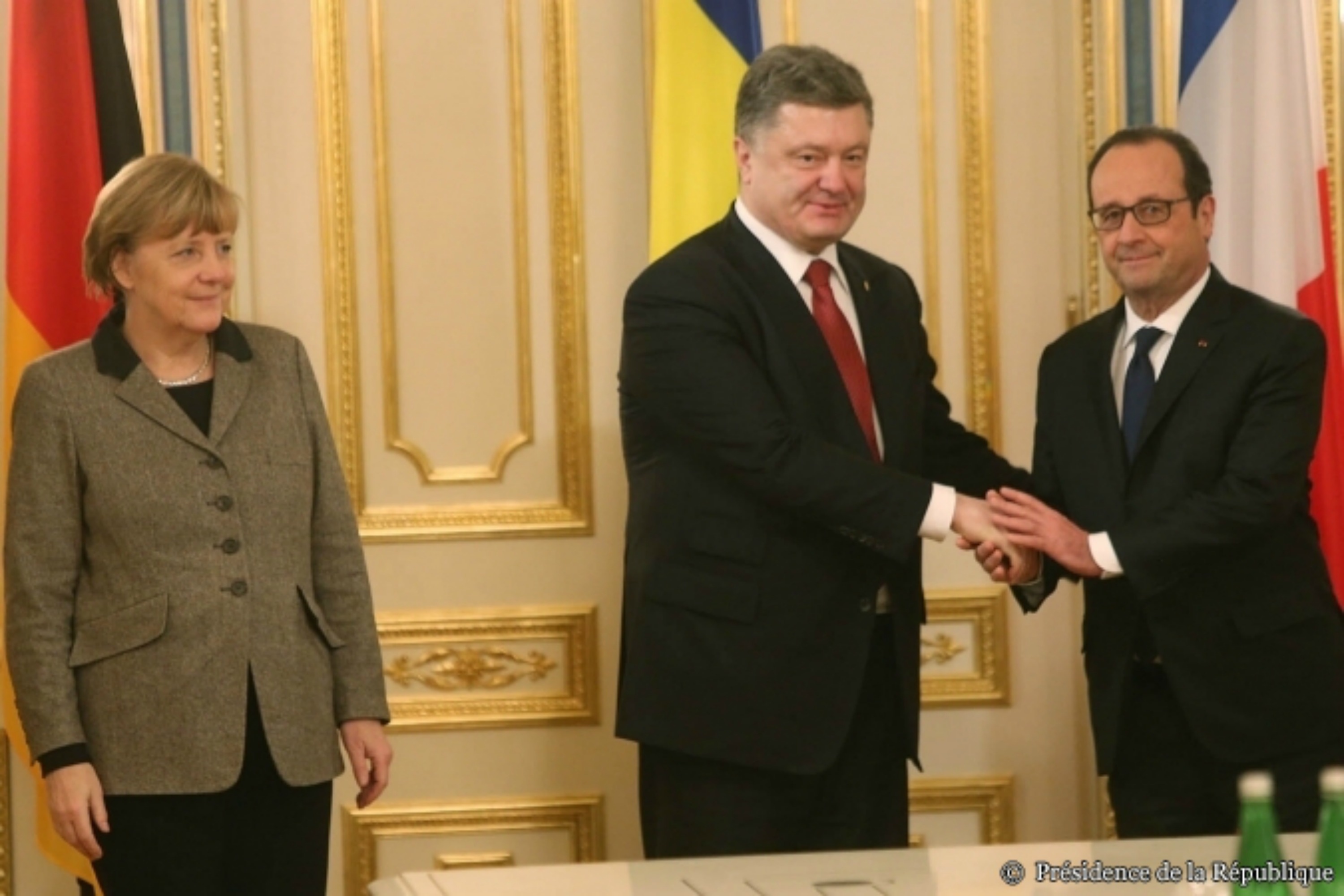 The leaders of Germany and France announced a new peace plan for Ukraine yesterday (5 February), flying to Kyiv with a proposal they would then take on to Moscow.

The coordinated trip by Chancellor Angela Merkel and President François Hollande comes as rebels advanced on a railway hub held by Ukrainian troops after launching an offensive that scuppered a five-month-old ceasefire.

The importance of reaching a deal was demonstrated by a dramatic collapse in Ukraine’s hryvnia currency, which lost nearly a third of its value after the central bank halted daily auctions at which it sold hard currency to banks.

With Washington moving towards a decision soon on arming Ukraine, US Secretary of State John Kerry also visited Kyiv on Thursday. He had no plans to go to Moscow and was not involved in the Franco-German initiative, although he supported it.

Moscow said it hoped talks with Merkel and Hollande would be “constructive”.

For talks to begin anew, Kyiv would have to accept that the separatists now control several hundred square kilometers more than agreed in Minsk — without Kyiv having to give up its claim to these areas as part of the Ukrainian state.

In the end, the goal of the peace process should be the restoration of Ukraine’s territorial integrity, the sources said.

The Franco-German plan looks like an eleventh-hour bid to halt the escalation of the conflict ahead of diplomatic deadlines likely to make the East-West confrontation even worse.

Peace talks collapsed on Saturday in Belarus, and EU leaders are expected to consider new sanctions against Moscow next week.

“Together with Angela Merkel, we have decided to take a new initiative,” Hollande told a news conference. “We will make a new proposal to solve the conflict which will be based on Ukraine’s territorial integrity.”

He and Merkel met President Petro Poroshenko in Kyiv on Thursday, and were expected to go to Moscow to see Russia’s Vladimir Putin on Friday.

Poroshenko said the talks “gave hope that there will be a result in a ceasefire”, his office said in a statement.

Hollande said earlier: “For several days, Angela Merkel and I have worked on a text … a text that can be acceptable to all.”

German Foreign Minister Frank-Walter Steinmeier played down the prospect of a breakthrough: “I don’t want to talk about the chances (of success). At this stage there is hope, rather than chances.”

NATO says Russia has sent weapons, funds and troops to assist the rebel advance, negating a ceasefire in eastern Ukraine where war has already killed more than 5,000.

Speaking after meeting Poroshenko in Kyiv, Kerry said Washington supported diplomacy, but would “not close our eyes” to Russian tanks and troops crossing the border.

“We are not seeking a confrontation with Russia. No-one is,” Kerry said. “We are very hopeful that Russia will take advantage of our broad-based, uniform acceptance of the notion that there is a diplomatic solution staring everybody in the face. That is what we want.”

US President Barack Obama will decide soon whether to provide Ukraine with lethal weapons to fight the separatists, Kerry said.

In Washington, Republican Senator John McCain said US lawmakers would write legislation requiring the United States to send arms to Ukraine if Obama does not do so. But European defence ministers meeting in Brussels opposed sending arms, suggesting a transatlantic split over the issue.

Moscow said it would consider any US arms sent to Kyiv to be a security threat.

Ukraine’s Poroshenko told a German newspaper it was time for NATO to send “modern weapons for protection and for resisting the aggressor.”

The rebels have been concentrating on Debaltseve, a rail hub where a government garrison has held out despite being nearly encircled.

On Wednesday, the rebels appeared to have captured Vuhlehirsk, a nearby small town where government troops had also been holding out. The army said it was still contesting the town, but Reuters journalists saw no sign of areas under army control. Four dead Ukrainian soldiers lay in a garden.

“Someone should come to remove these corpses, it is inhumane to leave them here to rot,” said Sergey Kopun, 50, a metal worker, emerging from a cellar where he had been sheltering with his wife and quadriplegic mother from days of fighting.

But Ukraine is by far the poorer of the two, and the collapse in the hryvnia was stunning. The central bank auctions scrapped on Thursday had enabled banks to set a value for the hryvnia, and without them traders had trouble finding a floor. A dramatic hike in the main interest rate to 19.5% from 14% did nothing to stop the plunge.

European defence ministers spoke out on Thursday (5 February) against sending weapons to the Ukrainian army, pointing to a potential transatlantic split if Washington decides to supply arms.

Several European defence ministers attending a NATO meeting in Brussels voiced opposition to sending weapons to Ukraine, fearing it could fuel the conflict.

"More weapons in this area will not bring us closer to a solution, and will not end the suffering of the population," German Defence Minister Ursula von der Leyen told reporters.

"We need to put a lot of pressure on the separatists and Russia in an economic and political way to find a solution at the table and not on the (battle)field because to give input to a potential escalation is not a good solution," she said.

Dutch Defence Minister Jeanine Hennis-Plasschaert said she believed most allies, "but in particular the Netherlands, will insist on non-lethal support to Ukraine. Political dialogue is the only way out of the crisis."

"We need to lower the temperature of the crisis, not to raise it," she told a news conference.

British Defence Secretary Michael Fallon said London would "see what more we can do in the way of training and equipment that is non-lethal."

Lithuanian Defence Minister Juozas Olekas said his country supported Ukraine with "some elements" for the military requested by Poroshenko but declined to give details.