Speaking about the refugee crisis and the Lybian and Syrian conflicts, Óscar Camps, director of the Spanish NGO Proactiva Open Arms, accused the EU of “hiding the dirt under the carpet” of international waters in the Mediterranean sea.  EURACTIV Spain reports.

Camps’ comment came on Tuesday (15/08) during a press conference following his intervention in the conference “Refugee crisis: conflicts, migration and European response”, in the University of Menéndez Pelayo.

Camps said that international waters have become a “black hole”, where not only migrants seeking to reach Europe’s coast die in the thousands, but “they’re forgotten”.

For this reason some migrants write their relatives’ phone numbers on their life jacket, so that they can be informed should they perish in the crossing.

On this point, Antonio Pampliega – a journalist specializing on conflict zones- added that thanks to the work of NGOs, and specifically referring to Camps’ Proactiva Open Arms, 2,000 deaths have been averted since the beginning of the year.

However he believes that the death count may be much higher as only the bodies that are “spit out” by the Mediterranean are counted, but not those that are “swallowed”.

“I have been reporting at sea many times. But when I first went aboard [Proactiva’s ship] in March, during the first rescue, I cried while working, because I realized that if they hadn’t been there, hose 180 migrants would have all died,” said Pampliega.

This July the Italian government proposed a “code of conduct” for NGOs operating privately-owned ships in the Mediterranean to make sure that they don’t act as taxis, ferrying refugees found off the Libyan coast, to Italian ports. In the absence of such an agreement, Italy says it will close its ports to those ships.

Proactiva Open Arms’s director describes what happens in the Mediterranean as the result of a “big farce”, with which they tried to “destabilize” the credibility of NGOs, accusing them of shady financing, to get rid of their “uncomfortable testimony” of what happens at sea.

According to Camps, Europe’s stance on rescue missions and accusations to NGOs has been one of “conscious inaction”, while NGOs “do what they don’t”.

In Camps’ view, Frontex, the European Border and Coast Guard Agency, treats deaths at sea as a “necessary” means of dissuasion for other migrants.

He believes that the EU and Italy’s objectives has been to “fabricate a case” in the Mediterranean to “discredit and soil the reputation” of NGOs and “create a fake need” to intervene in their operations. 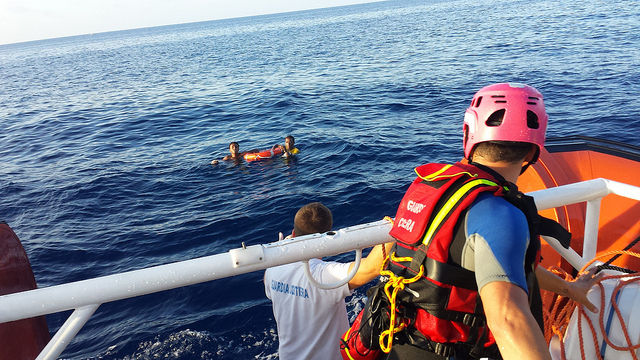 He said that “obviously” NGOs like Save the Children or Doctors Without Borders have to comply with a code of conduct, but that even prior to the Italian government proposition, no ship could act without the Italian coastguard’s consent.

“Everything that happens on our ships is done in accordance with [the Italian Authorities] since the beginning. Every two hours we send an email to Rome declaring our position, our direction and our speed so that they are aware should the geo-localization signals be lost or tampered with, which happened already,” he added.

Reuters reports that the Golfo Azzurro was told to leave Libyan waters or expect to “be targeted” on Tuesday 15 August.

Threats form the iybyan coastguard have prompted three NGOs – Save the Children, Doctors Without Borders and Germany’s Sea Eye, to suspend rescue operations at sea.