The EU is still seeking an agreement on refugee and asylum policy. [Freedom House]

The European Union’s population increased last year, despite the same number of births and deaths being recorded. Eurostat, the EU’s statistics office, said the bump was driven by migration.

Eurostat said that in 2016 the same amount of births and deaths were recorded (5.1 million), meaning the 28-country bloc’s natural population change was in fact neutral.

That means the positive population change of 1.5 million was driven largely by an increase in net migration. 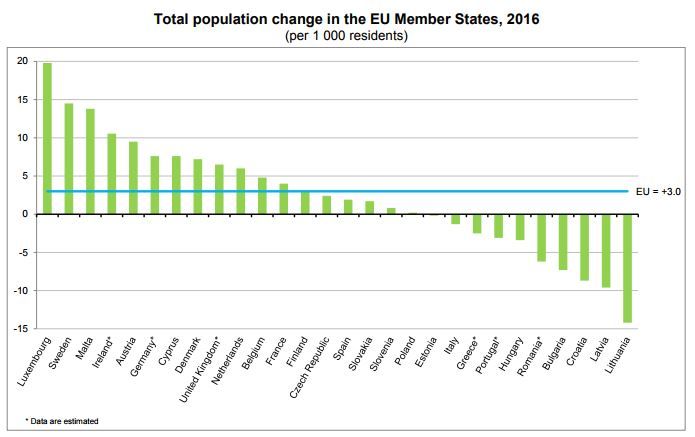 According to the UN High Commissioner for Refugees, 362,376 people crossed the Mediterranean Sea between January and December last year. That was a 64% decrease compared with the previous year.

This is reflected by the fact that 2015 saw a 2 million increase, despite the EU recording its first ever negative natural population change, where more people died than were born.

European Parliament President Antonio Tajani told Italian media last week that Europe is “underestimating” the size of the migration crisis and warned that “millions of Africans” will arrive over the next few years if urgent action is not taken.

Germany retained its status as the EU’s most populous country with 82.8 million inhabitants, after posting 0.76% growth. Sweden and the United Kingdom also recorded impressive increases.

The most live births were recorded in Ireland, while Italy found itself rooted to the bottom of the table. Croatia, Latvia and Lithuania reported the most significant population drops.

Europe’s population continues to age, putting increased pressure on national health systems and labour markets. This is as a result of reduced infant mortality rates and advances in medical science, which simply mean people are living longer lives.