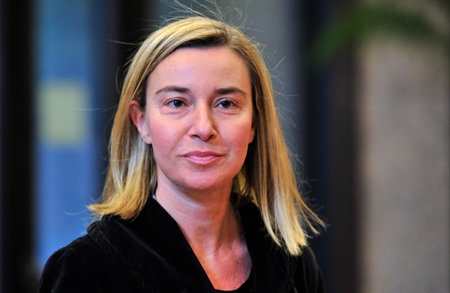 The European Union and Turkey have drifted apart on foreign policy and need greater “alignment” to tackle threats including Islamic State, the EU’s foreign policy chief said on Monday (8 December).

Speaking during one of the highest-ranking EU visits to Turkey in years, Federica Mogherini said the EU candidate nation had signed up to less than a third of the bloc’s recent foreign policy positions, compared to some 80% in the past.

“We need to improve on the alignment on foreign policy and security policy, it’s never been so low and this is a problem for the European Union, but it is mainly a problem for Turkey,” she told a news conference in the Turkish capital.

Turkey has been negotiating to join the EU since 2005, but political obstacles, notably over the divided island of Cyprus, and resistance to Turkish membership from some EU countries have slowed progress.

The visit by Mogherini, Enlargement Commissioner Johannes Hahn, and Humanitarian Aid Commissioner Christos Stylianides is aimed at giving new impetus to the relationship, including urging closer cooperation against Islamic State and pressing Ankara not to undermine EU sanctions on Russia.

It comes a week after Russian President Vladimir Putin’s trip to Turkey, during which Moscow announced it was scrapping the South Stream gas pipeline project and named Turkey as its preferred partner for an alternative.

Mogherini said the EU would not be drawn into a battle with Russia for influence over Turkey.

“It would be good if in the future we create more areas for cooperation rather than competition (with Russia) but Turkey is definitely out of this game, if there is a game in this sense,” she said.

Thousands of EU citizens are thought to have traveled to Syria and Iraq to join radical groups including Islamic State, many transiting through Turkey, which has faced criticism for failing to control its 1,200-km border with the two.

Officials in Ankara have in turn accused European nations of doing too little to stop would-be jihadists at source, while expecting Turkey to pick up the slack. A Turkish official said some 1,150 people had already been intercepted and sent back.

Mogherini also pledged €70 million in aid to Syrian refugees in Turkey during her two-day visit to the country.

Mogherini's trip marks a fresh beginning in the EU's relationship with Turkey, especially since the country has been negotiating membership in the bloc since 2005. However, the conflict over Cyprus and the resistance of some EU member states toward the inclusion of the large Muslim population in the bloc have stood in the way of Turkey's membership in the confederation of 28 European countries.

Mogherini is also grappling with a large number of linked issues, including the crisis in Ukraine.

Russia and Turkey are major trading partners. Russia provides the bulk of Turkey's gas requirements and is set to build Turkey's first nuclear power plant. The EU has urged Turkey to impose sanctions on Russia over its annexation of Crimea or at least not to increase trade with Russia to fill gaps left by suspended EU exports.