Mogherini defends herself against age jibes 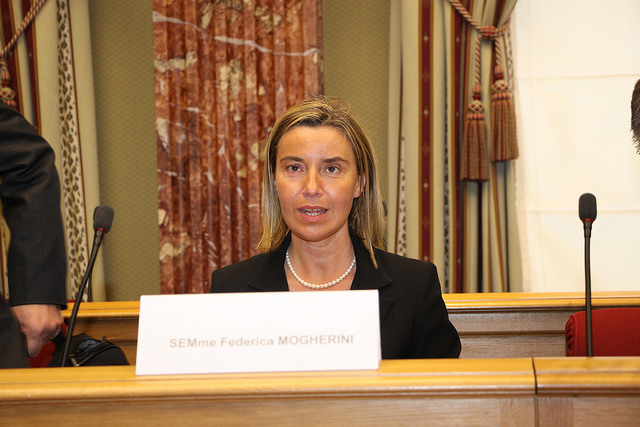 EU foreign affairs chief Federica Mogherini has used a speech in Cairo marking her first anniversary in the job to defend herself against jibes she was too young for the role.

Speaking to students at Cairo university, the 42-year old Italian hit back at critics who suggested when she took over a year ago, she was too inexperienced for a role that includes formulating responses to Russia’s President Vladimir Putin, the Middle East peace process and the Iran nuclear talks – to name just three issues on her in-tray.

Mogherini – speaking in the same venue where President Barack Obama made a landmark speech addressing the US relations with the Muslim world – joked to students that “some of you might remember there has been a little bit of scepticism before I started, mainly due to my age: too young, someone said.

“Well, indeed I am the youngest among my colleagues in the European Commission, and for sure within the leadership of the European Union.

“And I know I can say this here, in front of really young people – not like me: at 42, you are not really young anymore.”

“But I can tell you today: don’t let anyone use your age against you. It’s your strength. It’s your energy. It’s your capacity to dare, to dream, to hope, and not to stop if people tell you ‘it has never been done before, so you cannot do it.’ “

In fact, it was less Mogherini’s age (her predecessor, Catherine Ashton, was 53 when she took office, and Mogherini is actually two years older than Italy’s Prime Minister Matteo Renzi) that was the issue, than her perceived lack of experience.

On taking up the job – that has the official title is High Representative of the Community for Foreign Affairs and Security – she had only been Foreign Minister of Italy for eight months. And that was her first cabinet level job.

She also faced concerns from some eastern European member states about her perceived lenient stance on Russia.

Instead, after exactly one year in the job, she can count success in the nuclear negotiations with Iran as an achievement – albeit one shared with the US and others.

This week, after the Egypt trip, she will also chair a meeting of 51 foreign ministers from the EU and Asia in Luxembourg.

Mogherini used the remainder of her speech to urge Muslim youth in Egypt, and the region beyond, to turn away from the Islamist violence of ISIS, or Da’esh.

“Let me be frank: there has been a time when, in the so-called West, many have fostered the narrative of a clash of civilisations. It was such a mistake, for so many different reasons. Today, the idea of a clash of civilisations has been taken over by Da’esh – terrorists who encourage sectarianism to expand their own power, who exploit divisions for their own interest.

“Da’esh is putting forward an unprecedented attempt to pervert Islam. It is a movement that, rather than preserving Islam, wants us to trash centuries of Islamic culture in the name of their own fight for power. This is not glorious, this is simply destructive. Da?esh is not a friend but an enemy to Islam in today’s world. Its victims are first and foremost Muslim people. Islam itself is a victim of their despicable acts.”

0 responses to “Mogherini defends herself against age jibes”