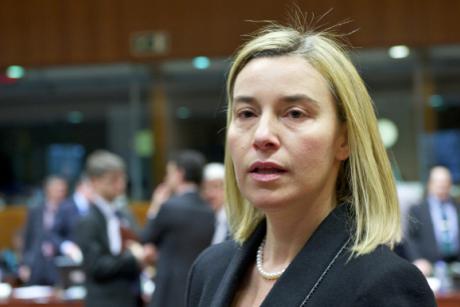 High representative for Foreign Affairs, Federica Mogherini. [The Council of the European Union]

25 years after the fall of the Berlin Wall, Europe’s foreign policy situation is difficult, said Federica Mogherini during her inaugural visit to the German capital, committing to close cooperation with Foreign Minister Frank-Walter Steinmeier, and announcing EU plans to discuss stricter sanctions against Russia in the coming week. EURACTIV Germany reports.

The topic of EU foreign policy always seems to elicit anecdotes about Henry Kissinger’s famous question about asking who to call when one wants to speak with the EU. The same was true during Federica Mogherini’s inaugural visit to Berlin as the EU’s High Representative for Foreign Affairs.

Together with German Foreign Minister Frank-Walter Steinmeier, the 41 year-old Italian politician participated in the Berlin Forum on Foreign Policy, sponsored by the Körber Foundation. The event’s focus was on evaluating German and European foreign policy.

During the discussion, Mogerhini said she remembered the Kissinger question very well. The first call she received after taking office was in fact from US Secretary of State John Kerry.

As the EU’s foreign policy representative, Mogherini is in charge of managing the complexity of 28 different countries, 28 foreign ministers and 28 sets of interests.

Here, Steinmeier said Germany would do everything in its power to support Mogherini in this “difficult task” of bundling the interests of 28 EU member states, which do not always coincide.

Looking at crises around the world, no region is more prone to conflict than Europe, she said. Meanwhile in the European Union, one is always faced with the dilemma of whether to follow national or European interests, Mogherini added.

Still, European foreign policy should include an understanding that most particular national interests can be better solved at the European level, Mogherini commented. The Italian politician said that in Europe the sense that the member states have common interests is often missing.

There is also no strategy to address the complexity of the global order, the High Representative continued. But one of the key competencies Europeans have is the ability to deal with complexity and come together in the face of many differences. Deciding how Europe can globally contribute to creating effective multilateralism is something Mogherini said is the “most exciting challenge that we as Europeans face.”

The transatlantic partnership with the United States must be fostered, Mogherini emphasised. “We need to develop a more political, mature relationship with the United States,” she said, indicating a need to develop opportunities for a more open and constructive form of friendship. This requires cooperation, support and mutual respect, the High Representative explained.

Steinmeier pointed out that the debate between Europe and the United States is characterised more by differences than commonalities. “Not long ago, Sigmar Gabriel anecdotally, but quite accurately, made the point that Germans and Americans share the eagle as their emblematic animal. But the only bird currently playing a transatlantic role is chlorine-treated chicken.” But there is a core of truth behind the escalation, Steinmeier said.

In contrast to the complexity of conflicts and crises, the dominant colour scheme in reporting on foreign policy and political rhetoric is indeed black-and-white, the German foreign minister commented. Here, Steinmeier reacted with noticeable irritation to the opening question in the panel discussion, which stated that Germans talk and think while Americans just shoot.

“A wonderful example for why we are also not making progress in German foreign policy,” Steinmeier said, “This type of black-and-white outline saying ‘on the one side are those ready to negotiate and on the other are the cowardly Europeans’ is a distortion of our cooperation at the international level, which I can only regret.”

Steinmeier and Mogherini expressed their concern over the latest developments in East Ukraine. All parties should adhere to the Minsk Protocol, the two chimed.

At a meeting in the coming week, EU foreign ministers are expected to discuss further sanctions against Russia. Mogherini said a decision over new sanctions is “always on the table”. At the same time, she made it clear that sanctions are not an end in themselves but an instrument used to reach a political solution in the conflict.

Steinmeier warned against an escalation of the conflict but also against a sanctions race. The risk of military confrontation is rising, he said. But, the foreign minister warned, the success of foreign policy should not solely be measured by willingness to issue punitive measures.

Federica Mogherini, the 41-year-old former Italian minister for foreign affairs, will lead the EU’s foreign policy for the next five years.

European heads of state and government elected Mogherini on 30 August, as the new High Representative for foreign and security policy, the de facto foreign affairs minister for the EU.

At the time, EU leaders could not agree on her candidacy. The Baltic states and Poland saw her as inexperienced and too soft on Russia. Mogherini had only been Italy's foreign minister since February 2014.