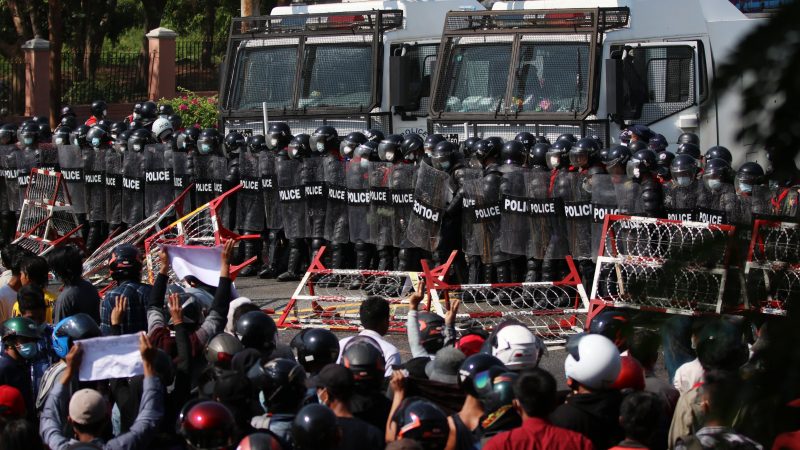 Demonstrators gestures at riot police during a protest against the military coup in Naypyitaw, Myanmar, 9 February 2021. [Maung Lonlan/EPA/EFE]

Myanmar’s military tightened its post-coup grip on power, stepping up a campaign of intimidation against the ousted civilian leadership while pushing harsher tactics as a fifth consecutive day of nationwide demonstrations began on Wednesday (10 February).

Soldiers raided and ransacked the headquarters of detained leader Aung San Suu Kyi’s party on Tuesday night, after police shot water cannon, tear gas and rubber bullets in a sudden escalation of force against the protests sweeping the country. 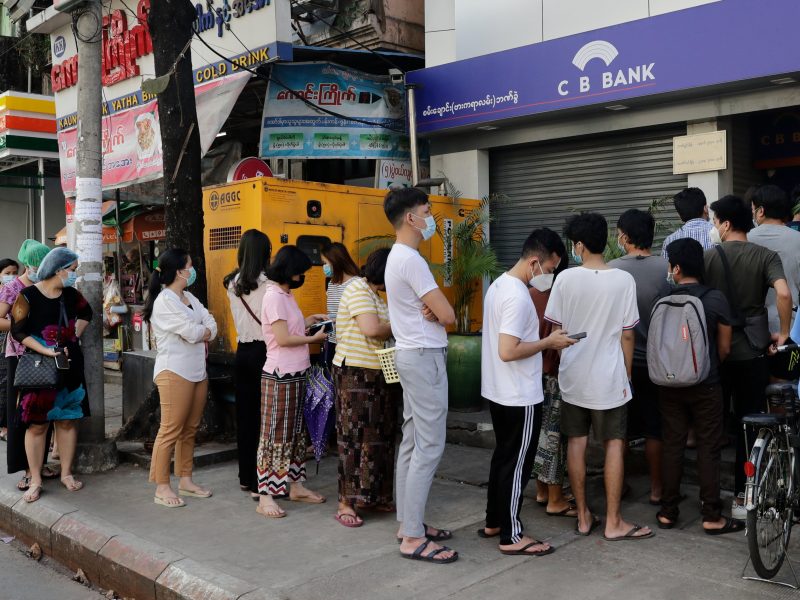 A doctor in Naypyidaw also confirmed the use of live rounds that left two people critically injured, but footage showed protesters in the capital were undeterred, returning to a blockade on a major highway on Wednesday morning.

Condemning the use of force, United Nations special rapporteur Tom Andrews said the police fire had injured a young woman, images of whom have spread like wildfire online alongside expressions of grief and fury.

“They can shoot a young woman but they can’t steal the hope & resolve of a determined people,” the human rights envoy wrote on Wednesday. “The world stands in solidarity with the protesters of Myanmar.” 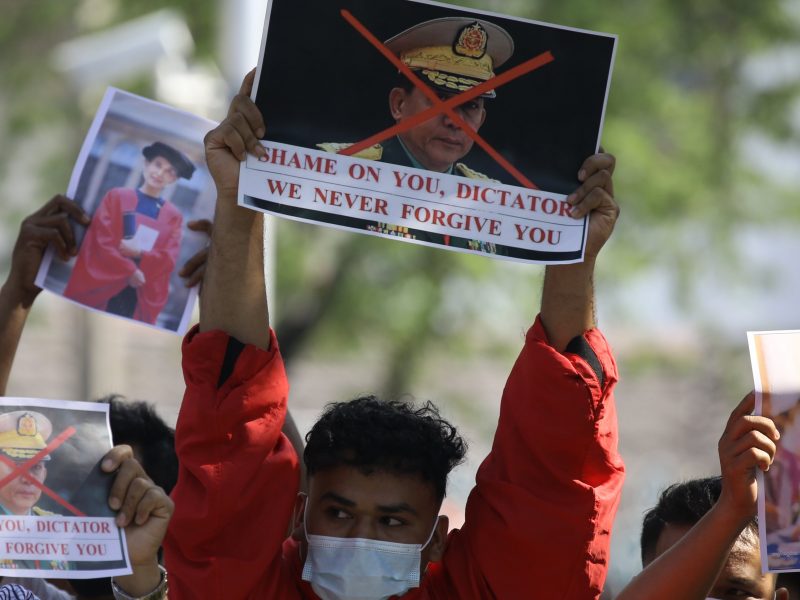 The woman, who was shot in the head, remains “in critical condition” at the ICU, the doctor told AFP.

State media claimed that the crowd had used “obscene language” and thrown objects at police, injuring four officers, in its first direct mention of the protests since they began on the weekend.

“Therefore, the police members dispersed in accordance with the methods and laws,” the state-run Global New Light of Myanmar newspaper reported, without mentioning other police confrontations elsewhere in the country.

Protesters had returned to the streets of Yangon on Wednesday morning, where the day before a large crowd faced off against water cannon and a phalanx of riot police near Suu Kyi’s residence.

Though there were no reported clashes with authorities in the commercial hub on Tuesday, university student Khin Nyein Wai said she was still afraid.

“I still came out as I do not like the military dictatorship,” she told AFP. “This is for our future.”

The military justified last week’s power grab by claiming widespread voter fraud in the November polls, which saw a landslide for Suu Kyi and her party.

It quickly moved to stack courts and political offices with loyalists.

In the 10 days since army chief Min Aung Hlaing ousted the Nobel laureate from power and ended a decade of civilian rule, Myanmar has been roiled by a burgeoning civil disobedience campaign and massive street protests.

Medical staff, air traffic controllers and teachers have staged strikes, fronted for work while wearing red ribbons on their uniforms or posed for photos while brandishing the three-finger salute adopted by the anti-coup movement.

Protesters on the streets have called for the release of Suu Kyi — who has not been publicly seen since she and other top political leaders were detained — and for the generals to respect the results of the last election.

By Tuesday, a ban on gatherings and a nighttime curfew was in effect in the three biggest cities of Yangon, Mandalay and Naypyidaw, along with various other towns.

An NLD member Soe Win told AFP Wednesday that a guard saw the raid conducted by security forces via remote CCTV, but was unable to intervene due to the imposed curfew.

In the morning, they found door locks broken, computer equipment missing, and electrical wiring and server cables cut. Bank documents from a safe box were gone.

Soe Win said the party is planning to file a police complaint.

The United States, which has led international condemnation of the coup, on Tuesday renewed its call for freedom of expression in Myanmar — and for the generals to step down.

The UN Human Rights Council has said it would hold a special session on Friday to discuss the crisis.

European Union foreign policy chief Josep Borrell warned the bloc could impose fresh sanctions on Myanmar’s military, but said any measures should be targeted to avoid hitting the wider population.