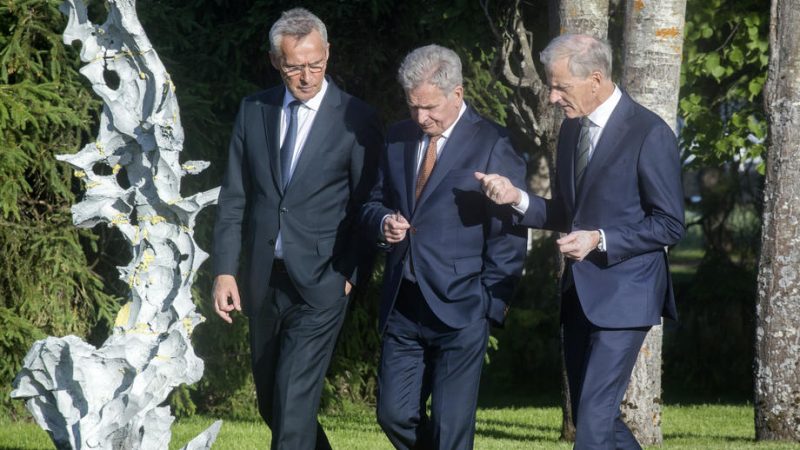 Security concerns raised by Turkey in its opposition to Finland’s and Sweden’s NATO membership applications are ‘legitimate’ and talks with Ankara would continue, alliance chief Jens Stoltenberg said on Sunday (12 June).

“These are legitimate concerns, this is about terrorism, it’s about weapons exports,” Stoltenberg told reporters after a meeting with Finnish President Sauli Niinistö in Naantali, Finland.

“We have to remember and understand that no NATO ally has suffered more terrorist attacks than Turkiye,” Stoltenberg said, using the Turkish pronunciation of the country’s name, as preferred by the country’s President Recep Tayyip Erdoğan.

In a break from their decades-long non-alignment policies, the two Nordic countries applied to join NATO last month, in response to Russia’s invasion of Ukraine.

But their bid to join the Western defence alliance has sparked opposition from Turkey, which has accused them of supporting and harbouring Kurdish militants and other groups it deems terrorists.

In past years the EU has said that Turkey must narrow its definition of terrorism. After the failed coup of July 2016, the Turkish authorities have labeled as “terrorists” many of its political opponents.

Demands from Ankara include Finland and Sweden to extraditing members of certain Kurdish organisations like the Kurdistan Workers’ Party (PKK) and others as well as lifting restrictions on arms exports to Turkey. PKK is on the EU terrorist list.

In the past weeks, Stoltenberg has been working to resolve the dispute.

The NATO chief said Ankara was a key ally for the alliance due to its strategic location on the Black Sea between Europe and the Middle East, and cited the support it has provided to Ukraine since 24 February.

However, while Turkey has repeatedly tried to act as a mediator between Russia and Ukraine, it has also seemingly attempted to maintain strategic ambiguity.

Some observers see the country’s reluctance as linked to US weapon acquisition obstacles the country has been facing.

Turkey requested in October to buy 40 Lockheed Martin-made F-16 fighters and nearly 80 modernisation kits for its existing warplanes, which Washington has so far refrained from responding to.

The sale of US weapons to NATO ally Turkey became contentious after Ankara acquired the Russian-made defence missile system S-400, triggering US sanctions and Turkey’s removal from the F-35 fighter jet program.

Should the sales hurdle be removed, it’s nearly certain the veto will fall, a NATO source suggested to EURACTIV earlier in May.

According to Finish broadcaster YLE, Niinistö said during talks with Stoltenberg that Turkey’s opposition was a surprise to him.

Both leaders said talks with Turkey would continue but gave no indication of progress in the negotiations or what timeline they would be looking at.

“Finland and Sweden have made it clear that they are ready to sit down and to address the concerns expressed by Turkey,” Stoltenberg said.

“The summit in Madrid was never a deadline,” he added, referring to a NATO meeting in Madrid at the end of June at which alliance leaders might not see a resolution in the stand-off over their membership by then.