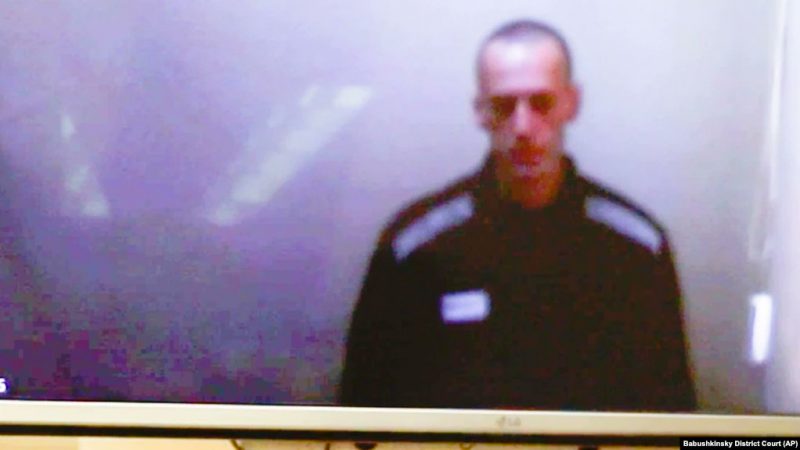 "I was taken to a bathhouse yesterday... there was a mirror there, I looked at myself -- I am just a horrible skeleton," Navalny told the court. [Babushkinsky District Court press service]

Alexei Navalny’s political network said Thursday (29 April) it is disbanding, as the jailed Kremlin critic appeared in court, gaunt and shaven headed, for the first time since ending his hunger strike.

During the hearing, which is part of an appeal by Navalny against a defamation sentence imposed in February for insulting a World War II veteran, President Vladimir Putin’s best known domestic opponent said he had started eating again.

“I was taken to a bathhouse yesterday… there was a mirror there, I looked at myself — I am just a horrible skeleton,” Navalny told the court, according to an audio recording released by the independent Dozhd television channel.

Navalny, his head shaved and looking gaunt following his refusal to eat for more than three weeks, referred to Putin as "the emperor with no clothes" and charged that Russia under his rule "continues to degrade every year." https://t.co/jJw6MSgFyC pic.twitter.com/gixAht53UP

“I haven’t been this weight since seventh grade,” he added, telling his wife Yulia who was in court that he is now allowed a couple spoonfuls of porridge a day.

Navalny’s lawyer Olga Mikhailova told reporters that his defence team plans to contest the decision in Russia and at the European Court of Human Rights.

“You are all traitors, you together with your naked king,” Navalny told the court in his final statement.

Another court held a hearing Thursday into a request from prosecutors that Navalny’s regional network and his Anti-Corruption Foundation (FBK) both be recognised as extremist, equating the organisations with the Islamic State group and Al-Qaeda.

If the request is met, their activities would be banned, putting members and supporters at risk of lengthy jail time. The hearings are set to resume on May 17.

The head of the regional network Leonid Volkov, however, said Thursday he was “officially disbanding Navalny’s network.”

He added that some of the offices would continue their activities as independent, political organisations.

Earlier this week, prosecutors ordered the network to suspend its activities ahead of the ruling and a court imposed sweeping bans on FBK.

FBK was launched in 2011 and routinely releases investigations into alleged corruption by officials at all levels of government, often accompanied by YouTube videos.

The regional network was founded during Navalny’s presidential campaign in 2018, although the opposition figure was barred from running.

It later supported his graft investigations as well as the Smart Voting strategy, which directs voters to cast their ballots for candidates best placed to defeat Kremlin-linked opponents.

Navalny was arrested in January after returning to Russia from Germany, where he had spent months recovering from a poisoning attack that he says was orchestrated by Putin.

Authorities have increased pressure against Navalny’s supporters since his return, with many top aides having left the country or been placed under house arrest.

Navalny’s allies said Thursday that while studying the extremism case files they discovered that Navalny, Volkov and FBK head Ivan Zhdanov are facing criminal charges that they were previously unaware of.

They are accused of creating an organisation “infringing upon the liberties and rights of individuals”, an offence punishable by up to four years in jail.

While Volkov and Zhdanov are abroad, new charges could be used to keep Navalny in prison for several more years.

Navalny is serving a two-and-a-half-year sentence in a penal colony outside Moscow for violating parole terms on old fraud charges that he says are politically motivated.

The opposition figure refused food for three weeks, demanding adequate medical treatment in prison for severe back pain and numbness in his limbs.

According to independent monitor OVD-Info, more than 100 people were detained in the following days, with police presenting CCTV footage or social media posts as evidence.

Last week Navalny ended the 24-day hunger strike after he was examined at a civilian hospital.