Happy-go-lucky Aya is kissed by her sister, Labiba. She has taught her how to go to the bathroom, wash her hands, and dress. [UNHCR UN Refugee Agency/Flickr]

Some 88,300 unaccompanied minors sought asylum in the European Union in 2015, 13% of them children younger than 14, crossing continents without their parents to seek a place of safety, EU data showed on Monday (2 May).

More than a million people fleeing war and poverty in the Middle East and Africa reached Europe last year. While that was roughly double the 2014 figure, the number of unaccompanied minors quadrupled, statistics agency Eurostat said.

Minors made up about a third of the 1.26 million first-time asylum applications filed in the EU last year. 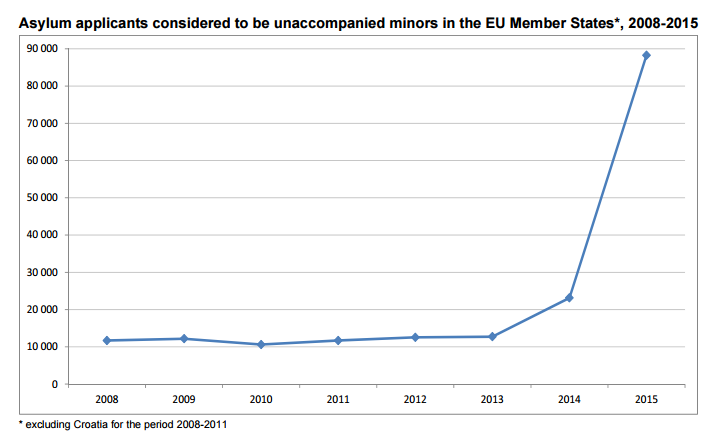 European Union states disagree on how to handle Europe’s worst migration crisis since World War Two and anti-immigrant sentiment has grown, even in countries that traditionally have a generous approach to helping people seeking refuge.

Four in 10 unaccompanied minors applied for asylum in Sweden, where some have called for greater checks, suspicious that adults are passing themselves off as children in order to secure protection they might otherwise be denied.

Over the last 4 months, a record-breaking 115,000 asylum-seekers arrived in Sweden. Among them were 26,000 unaccompanied children, enough to fill 1,000 school classes, Morgan Johannson, Swedish Minister for Justice and Migration, told the Brussels press yesterday (6 January).

More than 90% of the minors travelling without a parent or guardian were boys and more than half of them were between 16 and 17 years old. Half were Afghans and the second largest group were Syrians, at 16% of the total.

After Sweden, Germany, Hungary and Austria followed as the main destinations for unaccompanied underage asylum seekers.

Seeking to stem the influx of people, the EU has struck a deal with Turkey to stop people crossing from there into the bloc. Turkey hosts some 2.7 million refugees from the conflict in neighbouring Syria.

Unaccompanied children and minors are seen as the most vulnerable victims of the Syria conflict.

In a report published on 5 January, the UK parliament's International Development Committee (IDC) said it is particularly concerned about the plight of refugee children who have been left to fend for themselves in Europe.

Having survived the treacherous journey, there is a grave possibility that unaccompanied children become the victims of people traffickers who force them into prostitution, child labour and the drugs trade, the IDC warned.