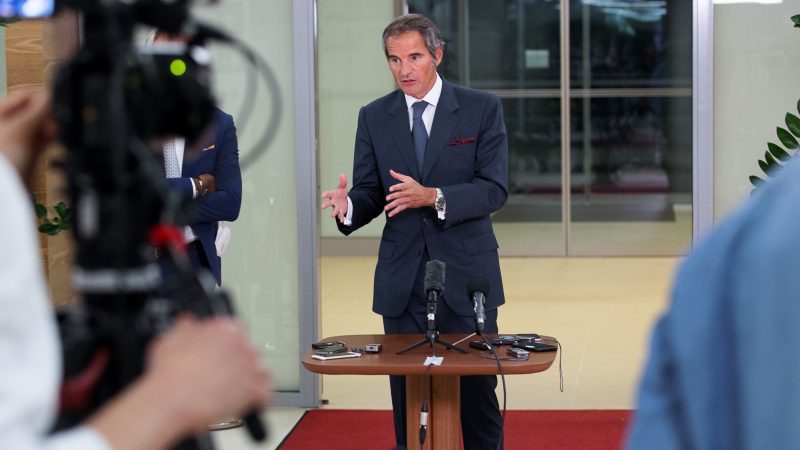 Director General of the International Atomic Energy Agency (IAEA) Rafael Mariano Grossi addresses the media after his arrival from Teheran, Iran, at the VIP Terminal of the Vienna International Airport in Schwechat, Austria, 12 September 2021. [EPA-EFE/FLORIAN WIESER]

The head of the UN’s nuclear watchdog hailed a deal struck with Iran on Sunday (12 September) over access to surveillance equipment at Iranian nuclear facilities, saying it allowed space for diplomatic talks.

The agreement between Iran and the International Atomic Energy Agency (IAEA) soothes a sore point in deadlocked talks to resuscitate the 2015 deal to curb Iran’s nuclear programme, also known as the JCPOA.

While emphasising that the agreement was “a stopgap”, IAEA Director General Rafael Grossi told reporters on his return from Tehran that “the most urgent issue” had been rectified by the deal, which would “allow time for diplomacy”.

Since Donald Trump’s administration walked away from the JCPOA in 2018, Iran has also retreated from many of its commitments.

Trump’s successor Joe Biden has indicated he wants to return to the deal but his administration has expressed impatience at the stalled talks.

In a joint statement Sunday, Grossi and Iranian Atomic Energy Organization (AEOI) chief Mohammad Eslami — also one of the country’s vice presidents — hailed a “spirit of cooperation and mutual trust”, while noting that surveillance was an issue to be treated “exclusively in a technical manner”.

Their deal relates to limits Iran has imposed on the IAEA’s ability to monitor various of its nuclear facilities.

Iran has refused to provide real-time footage from cameras and other surveillance tools that the UN agency has installed in these locations.

Under a compromise deal, the monitoring equipment remains in the agency’s custody but the data is in Iran’s possession, and must not be erased as long as the arrangement remains in force.

Initially agreed for three months, the compromise was extended by another month and then expired on 24 June.

With no word on next steps, the IAEA said in a report last Tuesday that its “verification and monitoring activities have been seriously undermined” by Tehran’s actions and Grossi spoke of a “major communication breakdown” with Iran.

But under Sunday’s agreement, the “IAEA’s inspectors are permitted to service the identified equipment and replace their storage media which will be kept under the joint IAEA and (Iran’s) AEOI seals in the Islamic Republic of Iran,” the joint statement said.

“The way and the timing are agreed by the two sides.”

Grossi said that the deal meant “we will be able to keep the information needed to maintain continuity of knowledge” of Iran’s nuclear programme.

However, in terms of the access to the information recorded by the equipment, Grossi said “the reconstruction, the coming together of the jigsaw puzzle will come when there is an agreement at the JCPOA level”.

He added that he had been invited to return to Iran “very soon”.

Russia’s ambassador to the UN in Vienna, Mikhail Ulyanov, welcomed the results of Grossi’s Tehran visit and called for a resumption of negotiations with Iran.

“We welcome the results of Mr.Grossi’s visit to #Tehran,” he tweeted. “We call for an earliest resumption of #ViennaTalks on restoration of #JCPOA.”

His call was echoed by European Union diplomat and nuclear deal negotiator Enrique Mora, who said he had “the same objective”.

The surveillance issue had heightened tensions at the time the new government of Iran’s ultraconservative President Ebrahim Raisi was taking charge in Tehran.

Iran has also boosted its stocks of uranium enriched above the levels allowed in the 2015 deal, the IAEA has said.

Ali Vaez, Iran Project Director at the International Crisis Group think tank, said of Grossi’s visit that “Iran’s turnabout is… indicative of the fact that it still wants to try to revive the JCPOA”.

The visit was reminiscent of previous instances of Iran’s “diplomatic dangle: timely concessions giving the appearance – or substance — of constructive engagement,” Vaez said.

He added that Raisi’s administration will be hoping Grossi’s visit heads off a possible resolution censuring Iran at next week’s meeting of the IAEA’s board of governors.

Grossi said Sunday’s developments meant the board of governors would have “new additional elements that will allow them to weigh the different possibilities”.

“We have decided to be present at the next meeting and to continue our talks on the sidelines” of next week’s meeting, Iran’s Eslami told the IRNA news agency.