"Giving the coordination of the neighbourhood declustering to Mogherini is no silver bullet, but certainly an option to consider. Neighbourhood policy is part of foreign policy," said Pascal Lamy. [European Commission]

As divisions in Europe are hardening under the pressure of the biggest flow of refugees since WWII, experts are making the case to adjust the European Neighbourhood Policy (ENP), so that it is ready to adapt and make the bloc resilient to rapid geopolitical changes.

“We live in an age of instability. It is beginning to sink in people’s mind. We need to develop crisis-management strategies as crisis have become part of the norm,” said Demetrios Papademetriou, co-founder of the Migration Policy Institute, and President of MPI Europe.

“We have to learn how not submit to the tyranny of the simple answers and quick solutions. There are no easy solutions you need to do extraordinarily well across portfolios, he added at a recent gathering of opinion-makers in Salzburg, organised by the Bertelsmann Foundation.

In recent years, political observers were repeatedly taken surprise by the Arab Spring, the refugee crisis, the Brexit referendum, and terrorist attacks across the continent.

Experts are making the case that the EU must get more deeply involved in the developments taking place in neighbouring countries to spot signs of fundamental change early on.

“What was supposed to become a ring of friends surrounding Europe has turned into a ring of fire, with dire consequences for the EU in terms of migration and terrorism, consequences that are carrying sparks of instability to the heart of the Union,” said Wolfgang Schüssel, former Austrian Chancellor and a member of the board of trustees at the Bertelsmann Foundation.

The situation has dramatically changed over the last ten years since the launch of the EU neighbourhood policy. Now, twelve out of sixteen countries in the EU’s neighbourhood are currently exposed to frozen conflicts, civil wars, territorial occupation and interstate conflict

The European Commission presented a review of the ENP last November (see background), but experts believe it needs to be tweaked so that actions are taken promptly.

To start with, the EU has to align its priorities with those of its different neighbours.

The bloc has to move away from a ‘one size fits all’ approach to its neighbourhood, and develop a more individualised strategy, taking into consideration the aspirations of the countries concerned without neglecting the regional context, said the experts gathered in Salzburg. 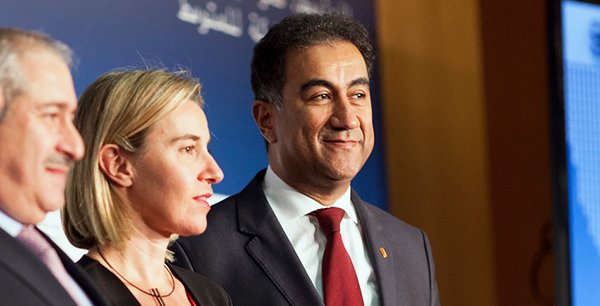 At the same time, the European Inion needs to go beyond the usual trade or security-driven agenda and foster cultural exchange, and cooperation in education, including the exchange of academics, but also joint missions to overcome historical disputes.

Take the case of Turkey, for example. The Union has to redraft its approach.

“If we want Turkey to be cooperative and be a partner, we desperately need to change the way we look at Turkey,” said Jan Jabbour, a research associate at Paris-based Sciences Po.

“Through the deal with the EU on refugees, Turkey was simply looking at sharing the burden of European countries in order to get power sharing in the sense of getting the recognition of a real partner,” added Jabbour, noting there is a clear need for a better of understanding partners’ motives and moving away from the thinking that Europe is the ultimate model of value-driven modernity. “What about if there is an alternative vision?”

Not only public policy, but also private sector practices

In this, business and civil society can help to support democratic development and trade. The EU and member states cannot go solo and must make it a priority to enhance cooperation with NGOs, media and SMEs, said the experts.

Establishing an inventory of ‘good neighbourhood practices’ to overcome conflicts and foster better bilateral relationship could become handy. That can be done also including working models from other regions of the world—specifically Chinese and US neighbourhood policies.

A number of examples already exist with companies such as Siemens and Daimler leading the way, according to the Irene Natividad, president of the Global Summit of Women.

Why not give training to nurses so that they can open their own clinics, experts suggested, stressing the need to make neighboring countries more resilient to change than pouring money as financial aid.

Financial aid, economic cooperation and foreign direct investment are important tools for making friends and gaining influence in the region only if they are strategically focused and serve both sides, rather than thinly spread over a multitude of programs, insisted experts at the Bertelsmann Foundation.

For example, a recent evaluation by the Court of Auditors concluded that the ENP’s migration policies leave room for improvement.

Since neither migrants nor the host countries seem to be living happily together, it is crucial that more targeted investments are made.

“We need to invest more generously to prevent them [migrants] from leaving and make them more at ease at home. Companies spend more on chocolate is than on what the UN spends on human rights,” said Safak Pavey, a Turkish member of parliament.

In the period from 2007 to 2013, the financial assistance offered through the ENP to the 16 neighbouring countries was €11 billion. Many experts have questioned whether it is really sufficient.

The latest review did not result in more money, with €128 million per country per year until 2020. It is too early to judge if the new Migration Partnership Framework presented in June will make a difference. At least €8 billion will be allocated over the next five years to support third countries, but there seems to be a solid case for increased private-public partnership.

Some are also advocating for allocating 10% of the EU budget for migration purposes, taking it away from other policies, like agriculture.

Against this backdrop, experts are also stressing that neighbourhood policy needs to be seen as part of foreign policy, rather than enlargement.

It is questionable if the European Commission, which shares competences for foreign affairs with the EU member states only to a limited degree, can successfully handle the neighbourhood dossier, argued experts.

In an interview with euractiv.com, former WTO chief argued in favour of handing over the task of leading the ENP fully to the High Representative for foreign policy and security Federica Mogherini.

“Giving the coordination of the neighbourhood declustering to Mogherini is no silver bullet, but certainly an option to consider. Neighbourhood policy is part of foreign policy,” said Lamy.

At the moment, Commissioner Johannes Hahn is in charge of the ENP, and enlargement negotiations.

Following the successful enlargement of the European Union in 2004, the Union launched the European Neighbourhood Policy (ENP) in 2006, as a way to support democratic development, the rule of law and a functioning market economy in a number of countries on the Southern and Eastern borders of the bloc.

The ENP, modelled on the enlargement policy, is aimed at promoting structural economic changes through trade, agreements, technical and financial support and visa liberalisation.

Against the backdrop of an ever-deteriorating security situation on the EU’s borders, European Commission President Jean-Claude Juncker called for a second overhaul of the neighbourhood policy, which was presented in November 2015, and marked a significant departure from the original.