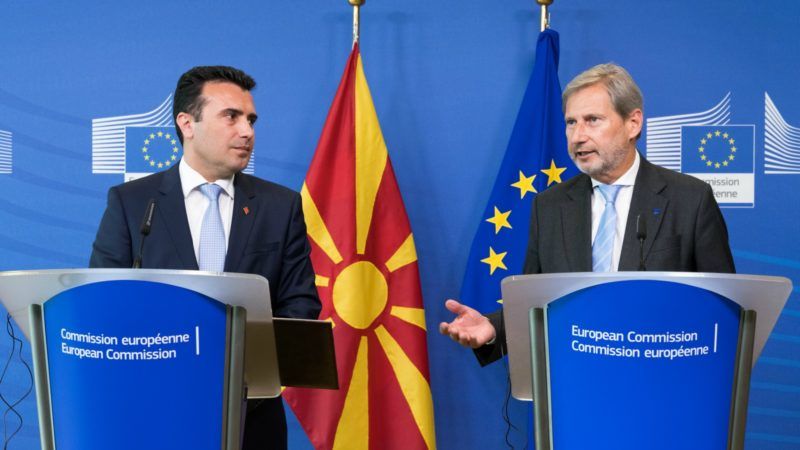 Macedonia, the southernmost ex-Yugoslav republic, was granted EU candidate status in 2005. It has never opened accession talks, mostly because of a name row with Greece, and has dragged its feet on key reforms.

But its new prime minister, Social Democrat Zoran Zaev, told reporters after talks with Enlargement Commissioner Johannes Hahn in Brussels on Monday that he would do everything to revive Macedonia’s chances of integration into mainstream Europe.

“For us, EU membership has no alternative, it is our key strategic priority and our aim is to open the talks as soon as possible. We know, of course, this has to be justified by results at home, in the judiciary, rule of law, reform of public administration,” said Zaev. Brussels was his first trip abroad since he took office on 1 June.

He said Macedonia’s foreign minister will soon travel to Athens to open talks on “new political cooperation”, a visit that would have hardly been possible during the rule of his conservative predecessor Nikola Gruevski. Zaev himself will soon travel to Bulgaria, whose government has been demanding a special bilateral treaty with Skopje.

Bulgaria has joined Greece in vetoing the opening of EU accession talks with Macedonia, despite a positive recommendation by the European Commission.

Also on Monday, Macedonia’s Foreign Minister Nikola Dimitrov told the Financial Times in an interview that Skopje would consider fresh proposals on its provisional name in an effort to unlock Greek opposition to its NATO membership.

Greece and Macedonia have been tied up in a row over Macedonia’s name, which Greece sees as a territorial grab because it is the same as that of a northern Greek province. Years of UN-mediated talks and pressure from Brussels have achieved no progress.

Hahn praised Macedonia for overcoming two-year-long political wrangling among the political parties but warned that the new government in Skopje must deliver “urgent reforms” if it wants to open EU accession talks any time soon.

“Implementation is key for getting a positive recommendation (for opening entry talks)… implementation of urgent reform priorities,” Hahn told a press briefing. He said getting a new government was a good step, “but it’s not enough. We want to see reforms”.

Before meeting Zaev, Hahn launched a thinly veiled appeal to Greece and Bulgaria to help reach a solution which would help Macedonia unblock its EU bid.

“Responsibility lies with the responsible people in (Macedonia) but if the political climate is not conducive to opening EU negotiations, certainly it’s not good for the country. Neighbours should have an interest to contribute to stability and inclusion of (Macedonia) into the EU,” Hahn said.

“It will not be easy but I hope a solution can be found. Now there is new momentum and I am confident we can use this situation and hopefully we can make progress,” he said.

The Commissioner said the accession of the Western Balkans into the European Union was “more relevant than ever” but urged the six countries of the region to press on with legal and economic reforms and create a common economic area that could attract investors and boost jobs.

“The accession of Western Balkans is…more relevant than ever. It’s a choice between exporting stability and importing instability. For everybody, the decision is clear,” Commissioner Hahn said. Of the six Balkan countries, only Serbia and Montenegro have started entry talks. Macedonia and Albania are official candidates while Bosnia and Kosovo are even further behind.

Hahn acknowledged that the economic union could only go so far in an area still burdened by ethnic tensions and mutual grievances. The region’s biggest country, Serbia, still refuses to recognise its former province of Kosovo, which declared independence in 2008.

“We are fully aware that a customs union is not achievable, we want a regional economic area, free flow of goods and services…. We want to create a kind of a common market of 20 million people, which will be more attractive, with more potential for investors, jobs,” he said.