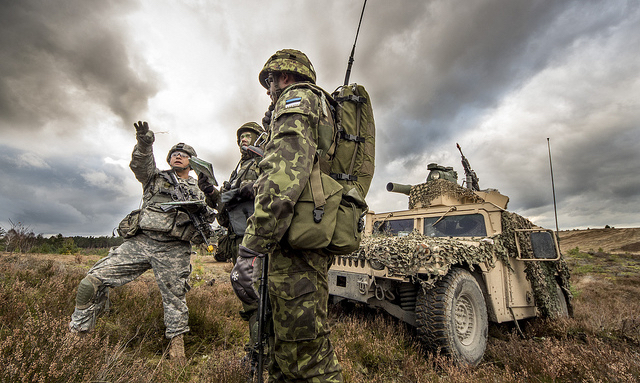 US and Estonian rapid response forces training in Poland. [US Army Europe/Flickr}]

The United States said yesterday (22 June) it would contribute special operations forces, intelligence and other high-end military assets to a new NATO rapid response force that aims in part to deter any future actions by Russia.

US Defense Secretary Ash Carter made the announcement during a trip to Germany, where he delivered an address accusing Moscow of trying to re-create a Soviet-era sphere of influence.

“We do not seek a cold, let alone a hot war with Russia. We do not seek to make Russia an enemy,” Carter said in an address in Berlin. “But make no mistake: we will defend our allies, the rules-based international order, and the positive future it affords us all.”

Russia’s intervention in Ukraine has put NATO allies in eastern Europe on edge and triggered a series of military moves by the NATO alliance, including an acceleration of exercises and the creation of a Very High Readiness Joint Task Force (VJTF).

Moscow denies providing troops or arms to pro-Russian separatists in eastern Ukraine. But neighbouring NATO countries, especially the Baltic states of Latvia, Lithuania and Estonia, fear Russia could foment trouble on their territories.

Carter, who met European members of the VJTF in Muenster, Germany before flying to Estonia, said he was preparing to discuss planned US contributions to the force with NATO defense chiefs later this week in Brussels.

The US support would include intelligence, surveillance and reconnaissance assets – which can include drones or manned aircraft – as well as special operations forces, logistical expertise and high-end US military assets.

Carter also said it would include airlift and precision joint fire capabilities, which could include anything from land-based artillery to air support or naval firepower.

“We’re making this commitment to the VJTF because the United States is deeply committed to the collective defense of Europe,” Carter said, speaking alongside his Dutch, German and Norwegian counterparts in Muenster.

Although many of the contributions announced on Monday could be drawn from within Europe, a defense official said the announcement could mean a temporary increase in U.S. forces in Europe in a crisis situation.

Still, US defense officials stressed that the United States was mainly providing high-end support to enable European land forces that form the bulk of the VJTF.

During his trip this week, Carter will climb aboard a US warship in Estonia fresh from Baltic Sea drills. He could offer more details in Europe this week on plans to pre-position heavy military equipment, officials say.

Moscow has decried the new steps by NATO and threatened to strengthen its own forces and to add more than 40 intercontinental ballistic missiles to its nuclear arsenal this year.

>> Read: Russia to beef up its nuclear arsenal, NATO speaks of ‘sabre rattling’

US officials say Ukraine has illustrated the importance of being able to counter “hybrid warfare”, the blend of unidentified troops, propaganda and economic pressure that the West says Russia has used there.

Moscow accuses the West of engineering the overthrow of a pro-Kremlin president last year in order to bring Kiev under its sway and try to isolate Russia.

NATO’s historic focus had been the conventional threats of the Cold War, which effectively ended with the collapse of the Soviet Union in 1991. But Carter said NATO “will not rely on the Cold War playbook”, citing instead a combination of military and non-military tools, including sanctions.

Carter encouraged Europe to keep up the sanctions – which he called the best tool – for as long as it takes to change Russia’s calculations.

“The United States will not let Russia drag us back to the past,” he said.