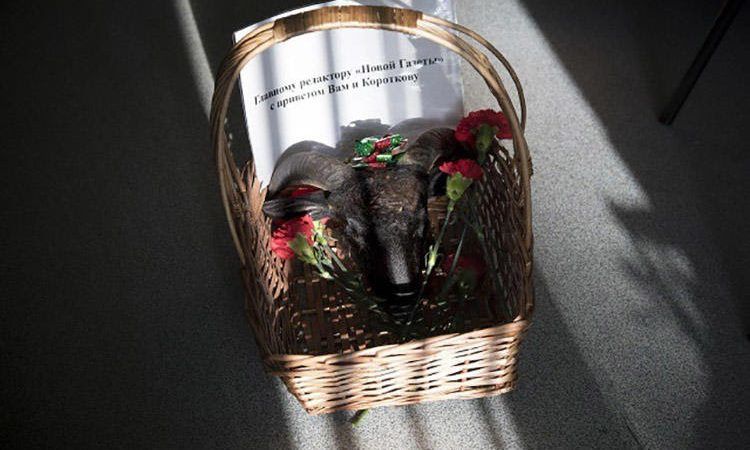 The severed ram's head and the message reading: "To Novaya Gazeta's chief editor. Greetings to you and to Korotkov!" [Novaya Gazeta]

A funeral wreath, a severed ram’s head and threatening notes were sent to the Novaya Gazeta’s Moscow office this week in what the newspaper said in an editorial statement were the latest threats against its journalists.

Novaya Gazeta broke a fascinating story on Monday (22 October) about “Putin’s cook” Evgeny Prigozhin and the bad things that happen to those who cross his path.

While the new US indictment on Friday seems to have offered little next to nothing on Prigozhin's troll farm, a piece by Denis Korotkov today is truly a gem.A few days before the publication he has a funeral wreath delivered to his home. Quick summary here https://t.co/8JtqXaB7U3

The author, investigative journalist Denis Korotkov, received the basket, a Mafioso death threat message, prior to the publication on 17 October. The threats were denounced by the Committee to Protect Journalists (CPJ), which urged the Russian authorities to take immediate action to ensure journalists’ safety.

The message accompanying with the severed ram’s head read: “To Novaya Gazeta’s chief editor. Greetings to you and to Korotkov!”

Novaya Gazeta, one of the last independent news outlets in Russia, which has seen five of its reporters killed since 200 because of their work, is critical of President Vladimir Putin and his government.

The newspaper has said that authorities are conducting a smear campaign against Korotkov and had accused him of endangering Russian soldiers’ families by publishing the personal information of pilots serving in the Russian Air Force in Syria.

In its editorial statement, Novaya Gazeta rejected the accusations and said it had filed a police report in response to the latest threats against Korotkov.

The threats did not discourage Novaya Gazeta from publishing Korotkov’s investigative article, which says that Prigozhin was involved in several attacks against his opponents, including at least one killing.

Putin spokesman Dmitry Peskov said on 22 October that the Kremlin “has seen the article” about Prigozhin but was “not aware of any confirmation of the published information by the competent organs.”

Korotkov’s article is based on a series of interviews he conducted with Valery Amelchenko, a former convict who claimed he had worked as a security aide for Prigozhin. Apparently, Amelchenko also told many stories in which he was also a culprit, in the hope that Novaya Gazeta could help ensure his security.

According to an agreement between Amelchenko and the journalist, in case of force majeure, Novaya Gazeta could use all the information he had provided from 20 October 2018.

Amelchenko disappeared on 2 October, shortly after meeting Korotkov and telling the journalist that he was being followed. Two of his cell phones and one of his shoes were found close to his home.

Korotkov quoted Amelchenko as admitting that he had personally orchestrated attacks on several of Prigozhin’s rivals, including the killing of an opposition blogger, on Prigozhin’s behalf.

The article describes another one of Prigozhin’s henchmen, Oleg Simonov, suspected of attacking the husband of a lawyer of opposition politician Aleksei Navalny’s Anticorruption Foundation and injecting him with poison.

Amelchenko was also quoted as saying several people who work for Prigozhin had travelled to Syria in 2017 to test an unknown poison on Syrians who refused to fight for President Bashar al-Assad’s government. Novaya Gazeta corroborated the account with two other sources.

Poison was the weapon of choice for the hit squad Prigozhin deployed against opposition bloggers, according to one of its members. And could it really be anything else these days in Russia? https://t.co/68tQxGinfY

Prigozhin is alleged to have financed and directed the Internet Research Agency (IRA), a St. Petersburg-based firm involved in online influence operations on behalf of the Kremlin, described by the US intelligence as a troll farm.

The US Treasury imposed sanctions against Prigozhin in December 2016 for providing support for Russia’s involvement in the war in eastern Ukraine.

Media in Russia and in the West have linked Prigozhin to the Wagner group, a private Russian paramilitary organisation whose contractors have reportedly taken part in the wars in Syria and eastern Ukraine.

CPJ documented earlier this year how three journalists who were investigating the Wagner group in the Central African Republic, for the Moscow-based investigative media outlet Investigations Management Centre, were shot and killed.