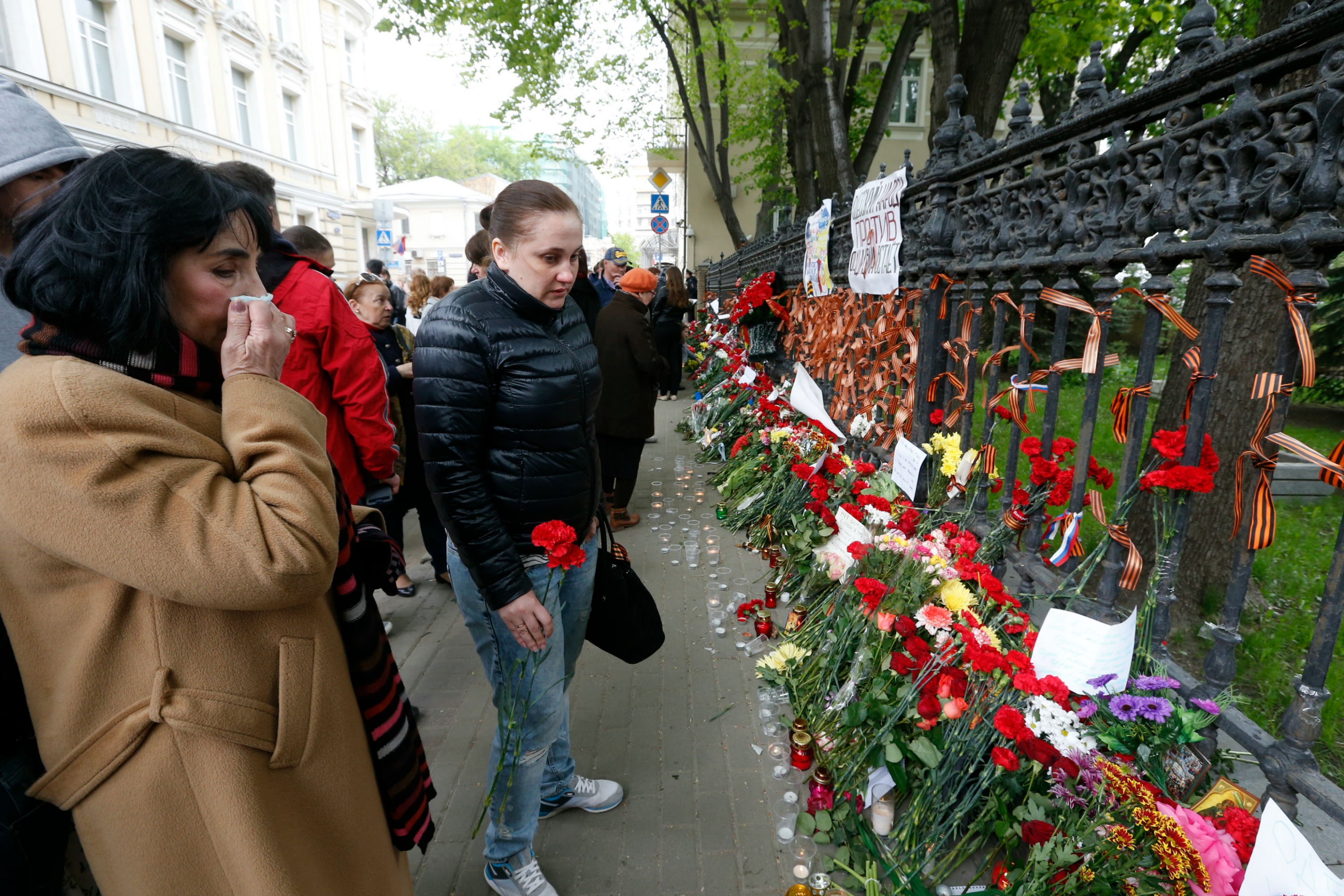 People bring flowers, lit candles and black and orange ribbons of St. George to mourn the death in Odessa, at the gate of the Ukrainian embassy in Moscow. Photo Reuters

Militants chanted “We will not forgive!” and “Russia!” as they smashed windows and broke down the gate at the compound two days after over 40 pro-Russian activists died in a blaze at a building they had occupied after clashes with pro-Kyiv groups.

Friday’s deaths occurred after running clashes, involving petrol bombs and gunfire, between supporters and opponents of Moscow on the streets of Odessa, where the majority of people speak Russian. The pro-Russian activists were trapped in a building as it burned down.

Some officers were offered the black and orange St. George’s ribbon, a Russian military insignia that has become a symbol of the revolt, and were cheered by the crowd of several hundred.

Prime Minister Arseny Yatseniuk, speaking in the Black Sea port, was pointedly critical of the Odessa police: “If the law enforcement system in Odessa had worked not exclusively on the ‘Seventh Kilometre’ and had protected people, then these terrorist organisations would have been foiled,” he said.

The Seventh Kilometre is an open market on the edge of Odessa, associated in the popular consciousness with the corruption and black market business that have blighted Ukraine’s 23 years of post-Soviet independence.

Addressing hundreds of supporters of the Kyiv authorities who gathered near the site of the blaze late on Sunday, newly appointed police chief Ivan Katerinchuk promised to bring those behind Friday’s deaths to justice, whatever their allegiance: “Like you, I want to restore law and order to Ukraine,” he said.

Friday’s clashes were the deadliest since Moscow-oriented president Viktor Yanukovich was forced to flee in February and pro-Russian militants launched uprisings in the industrial east. They also marked the first serious disorder far to the west of those eastern areas, heralding possible trouble for Kyiv.

Acting President Oleksander Turchinov said separatists had met resistance in Odessa but that police forces in the eastern Luhansk and Donetsk regions, focus of support for pro-Russian militants, were in disarray in the face of rebellion.

“In these regions … there are whole structures working together with the terrorists,” Turchinov said in a television interview, employing the term Kyiv applies to anti-Kyiv militants who have set up strongpoints in a string of eastern towns. “This is a colossal problem.”

Turchinov said Russian special forces were working with success to destabilise Ukraine, helped by “guest stars from Transdniestria” – a breakaway territory in eastern Moldova, 50 km (30 miles) from Odessa, that hosts a Russian military base.

NATO commanders have warned that Russia might hope to control a swathe of southern and eastern Ukraine, including the annexed Crimea, all the way to the border with Transnistria.

Outright civil war in Ukraine and the division of a country the size of France would have serious implications for countries around, not least for Russia and for NATO states bordering it.

As rebellion simmered, questions were raised about the ability of the army as well as police to confront insurgents.

Police in the eastern port of Mariupol said pro-Russian rebels posing as sympathisers had presented soldiers at a checkpoint with gifts of food.

“It turned out that the food contained a substance that induced sleep among the servicemen,” the acting head of Mariupol criminal police department, Alexei Paniotov, said.

“After about half an hour, about 20 unidentified people arrived in three cars and, taking advantage of their helpless state, took them prisoner along with four automatic rifles, a grenade launcher, a machinegun and ammunition.”

The five soldiers were freed after negotiations.

Yatseniuk dismissed Russian accusations that his government was provoking bloodshed in the east with an operation to restore Kyiv’s authority in a series of cities under rebel control.

“The process of dialogue had begun, only it was drowned out by the sound of shooting from automatic rifles of Russian production,” he said.

There was renewed diplomatic activity on Sunday.

Russia said it would try to organise talks between Kyiv and representatives from the south-east: “It appears that without external help the Kyiv authorities are not capable of establishing such a dialogue,” Russian deputy foreign minister Grigory Karasin told Rossiya-24 television.

Germany’s foreign minister said he was pressing for a second international conference at Geneva to bring Russia and Ukraine together with the United States and European Union to settle the dispute. Moscow and Kyiv accuse each other of wrecking a four-way accord to end the conflict signed at Geneva on 17 April.

Russian President Vladimir Putin and German Chancellor Angela Merkel discussed the Ukraine crisis in a telephone call and stressed the importance of “effective international action” to reduce tension, the Kremlin said on Sunday.

A German government spokeswoman said they had also discussed a visit to Moscow on Wednesday by the head of the OSCE, the European security body which has been trying to mediate on the ground but saw some of its monitors held for a week by rebels.

There were no signs of Ukrainian forces pushing their declared campaign to remove separatists from eastern cities including Kramatorsk, Donetsk and the rebel stronghold of Slaviansk.

Kyiv is organising a presidential election for 25 May.

However, as things stand, it would have trouble conducting the vote in many parts of the east, a circumstance that would allow Russia to declare any government emerging as bereft of legitimacy.

Russia denies ambitions to seize eastern Ukraine as it has annexed the Crimea peninsula but reserves the right to send troops to defend Russian-speakers if it deems necessary.

Separatists who have declared a “People’s Republic of Donetsk” are planning a referendum on secession next Sunday.

The capital Kyiv has remained quiet since the protests that forced Yanukovich to flee to Russia. But celebrations this week marking the anniversary of the Soviet victory in World War Two could be a source of tension.

Russian President Vladimir Putin blamed Kyiv and the West for the bloodshed in Odessa.

"Kyev and its Western sponsors are practically provoking the bloodshed and bear direct responsibility for it," spokesman for Russian President Vladimir Putin told reporters, according to RIA Novosti.

"Those who recognize this junta as legal power becomes an accomplice of this crime," Interfax quoted Peskov as saying.

In a statement posted on the Kremlin website, Putin expressed “deep condolences to the relatives of the killed and burnt alive in Odessa and wished fast recovery to those who were injured as a result of punitive actions of Kyiv authorities.”

EU foreign affairs chief Catherine Ashton said in a press release that the EU was “deeply saddened” by the many deaths and injured in the Friday events in Odessa and conveys sincere condolences to the families of all those victims of blind violence.

“The facts which led to this tragic loss of so many human lives must now be established in an independent investigation and those responsible for these criminal acts brought to justice.

“The EU urges everyone to exercise utmost restraint and not to exploit this tragedy to fuel more hatred, division and senseless violence.

“This should be a moment of reflection for everyone and an occasion for all Ukrainians to come together and to find ways to overcome the artificially fuelled divisions over the last months. All political forces must now assume their responsibility and engage in a peaceful and inclusive dialogue to find a joint way out of the crisis.

All signatories to the Geneva Joint Statement of 17 April must reinforce their efforts in view of its implementation. The EU is fully committed and will continue to do its utmost,” the statement ends.