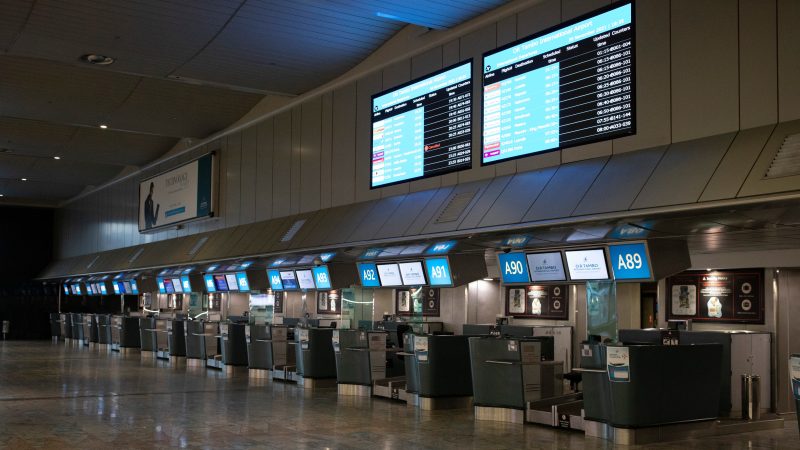 Unused check-in counters due to canceled flights are pictured at OR Thambo International Airport as restrictions on international flights from South Africa start to take effect after the announcement by local scientists of the new Omicron variant, Johannesburg, South Africa, 30 November 2021. [EPA-EFE/KIM LUDBROOK]

The World Health Organization warned countries on Tuesday (30 November) not to impose blanket travel bans over the new Omicron coronavirus variant as governments and scientists try to determine how much protection current vaccines would offer against the strain.

Financial markets fell sharply after the head of drugmaker Moderna said existing COVID-19 vaccines would be less effective against the Omicron variant. MSCI’s gauge of stocks across the globe shed 1.39% a day after broad declines in Europe and Asia.

BioNTech’s chief executive struck a cautiously positive note, saying the vaccine it makes in a partnership with Pfizer would likely offer strong protection against severe disease from Omicron, which was first reported in southern Africa a week ago.

The questions over vaccine effectiveness came as cases of the new variant spread, with the first reported case in Latin America emerging in Brazil. The country’s health regulator, Anvisa, said a traveller arriving in Sao Paulo from South Africa and his wife were both apparently infected.

Canada will extend its ban on travellers from southern Africa to also cover those from Nigeria, Malawi and Egypt, health officials said on Tuesday, for a total of 10 countries. Canada will require people arriving by air from all nations except the United States to take a COVID-19 test, Health Minister Jean-Yves Duclos said.

The World Health Organization (WHO) asked countries to apply “an evidence-informed and risk-based approach” with any travel measures, including possible screening or quarantine of international passengers. Blanket travel bans would not stop the spread of Omicron, it said.

WHO Director-General Tedros Adhanom Ghebreyesus said he understood the concerns about Omicron.

But he added: “I am equally concerned that several member states are introducing blunt, blanket measures that are not evidence-based or effective on their own, and which will only worsen inequities.”

Andrea Ammon, chair of the European Centre for Disease Prevention and Control (ECDC), said the cases of Omicron so far confirmed in 10 European Union countries were mild or without symptoms, although in younger age groups.

News of Omicron’s emergence wiped roughly $2 trillion off global stocks on Friday, after it was first identified in southern Africa and announced on 25 November.

“There is no world, I think, where (the effectiveness) is the same level…we had with Delta,” Moderna’s CEO, Stephane Bancel, told the Financial Times

“I think it’s going to be a material drop. I just don’t know how much because we need to wait for the data. But all the scientists I’ve talked to … are like, ‘this is not going to be good’.”

The University of Oxford said there was no evidence that current vaccines would not prevent severe disease from Omicron, but that it was ready to rapidly update its shot, developed with AstraZeneca, if necessary.

The administration of US President Joe Biden suffered two more legal setbacks on vaccine policy on Tuesday. A federal judge blocked a vaccination rule for healthcare workers and applied the ruling nationwide where the mandate was still in effect.

Another federal judge blocked the US government from enforcing a vaccination mandate on government contractors in three states.

Regeneron Pharmaceuticals said its COVID-19 antibody cocktail and other similar antiviral treatments could be less effective against the latest variant.

EMA’s Cooke said “cross neutralisation,” a lab test for whether the approved vaccines are effective against Omicron, would take about two weeks. If there was a need to change COVID-19 vaccines, new ones could be approved within three or four months, she said.

“Vaccination will likely still keep you out of the hospital,” said John Wherry, director of the Penn Institute for Immunology in Philadelphia.

Moderna and fellow drugmakers BioNTech and Johnson & Johnson are already working on vaccines that specifically target Omicron. Moderna has also been testing a higher dose of its existing booster.

Sahin said he expects lab tests to show some loss of protection against mild and moderate disease due to Omicron but the extent of that loss was hard to predict.

Border closures have already cast a shadow over economic recovery, with parts of Europe now seeing a fourth wave of infections as winter sets in.

Japan confirmed its first case of the new variant on Tuesday, in a traveller from Namibia. Australia found that a person with Omicron had visited a busy shopping centre in Sydney while probably infectious.

Britain and the United States have both pushed their booster programmes in response to the new variant. London said international arrivals would have to self-isolate until they get a negative result in a PCR test.

Greece said vaccination would be compulsory for those over 60, the group seen as most vulnerable to COVID-19.

Australia on Monday delayed the reopening of its international borders by two weeks, less than 36 hours before foreign students and skilled migrants were to be allowed back.

The picture of COVID cases was mixed.

In Germany, a current hotspot of the previous significant variant, Delta, the seven-day average infection rate fell slightly for the first time in three weeks after new restrictions to slow transmission.

France registered its highest daily infection tally since April. And the Dutch health authority said Omicron was already spreading in the Netherlands, where intensive care beds are running out and measures including restrictions on hospitality have yet to take effect.

The curbs on travellers from southern Africa have highlighted the inequality of vaccine distribution, which may have given the virus more opportunities to mutate.