In a pre-summit interview with CBS News’ “Face the Nation” program aired on Sunday (15 July), Trump lumped in the EU with China and Russia as US economic adversaries. “I think the European Union is a foe, what they do to us in trade,” he said.

BREAKING: President Trump in new @CBSNews interview calls the European Union a “foe” of the United States. The president also said Russia is a “foe in certain respects” and China “is a foe economically.”
Coming up on @FaceTheNation: pic.twitter.com/s4mRpV8ok2

Trump and Putin will meet today (16 July) in Helsinki for their first stand-alone meeting since Trump took office in January 2017. Trump arrived in Helsinki yesterday evening after spending the day playing golf at his private club in Scotland.

The Helsinki summit, which comes at one of the most crucial junctures for the West since the 1991 fall of the Soviet Union, has alarmed some NATO allies who fear Putin might seek a grand deal that would undermine the US-led transatlantic alliance.

Some politicians in the West believe the summit is happening at one of the most crucial junctures for the West since the 1991 fall of the Soviet Union. Certain NATO allies fear Putin might seek a grand deal that would undermine the US-led transatlantic alliance.

During last week’s NATO summit in Brussels, Trump repeatedly criticized other member countries for failing to spend more on defence, and openly questioned the alliance’s purpose.

In recent months, he has also been highly critical of the EU in trade terms, arguing that its policies make it difficult for US exporters.

After Trump labeled the EU a “foe,” Donald Tusk, president of the European Council, responded on Twitter, using one of Trump’s favorite stock phrases.

“America and the EU are best friends,” Tusk wrote. “Whoever says we are foes is spreading fake news.”

America and the EU are best friends. Whoever says we are foes is spreading fake news.

Commission President Jean-Claude Juncker is due to meet Trump in Washington before the end of July to discuss trade.

Speaking last month about his recent encounter with the US president, Juncker said Trump had told him: “Jean-Claude – you are a brutal killer.’” Juncker, a former prime minister of Luxembourg, added: “I think he meant it as a compliment but I am not sure.”

Trump and his aides have been working through the weekend to soften expectations for tangible results from the Russia meeting.

“I go in with low expectations,” Trump told CBS.

John Bolton, Trump’s national security adviser, said in an interview with ABC’s “This Week” that the United States would not be looking for “deliverables” and that the meeting would be “unstructured,” beginning with a one-on-one session between the two leaders.

The US Ambassador to Russia, Jon Huntsman, told NBC’S “Meet the Press” that the meeting was “an attempt to see if we can defuse and take some of the drama, and quite frankly some of the danger, out of the relationship right now.”

A probe over allegations of Russian meddling in the 2016 US presidential election has clouded Trump’s presidency. Trump has denied any collusion with the Russians by his campaign and Russia denies it meddled.

For Trump, the formal meeting with Putin is an opportunity to develop a closer working relationship with the Russian president.

They have met twice before on the sidelines of international summits. Last November, in Vietnam, they agreed to maintain open military channels of communications between their forces in Syria.

Trump has baffled his own advisers at times with his unabashed desire for strong ties with Putin, White House sources have said. Most US officials see Putin as an unsavory character on the world stage.

US officials have said they hope to make progress during the talks persuading Russia to use its influence to get Iranian forces out of Syria, as part of a wider campaign to rein in Iran’s influence in the Middle East.

They also expect Trump to bring up Russia’s incursion into Ukraine and the allegations of Russian meddling in the election. Other issues include the potential for nuclear arms talks and North Korea’s nuclear challenge, given that US officials have said Russia had worked in the past to help Pyongyang circumvent international sanctions.

Huntsman on Sunday said that it was “highly unlikely” the United States would recognize Russia’s 2014 annexation of Crimea, but would not rule it out. 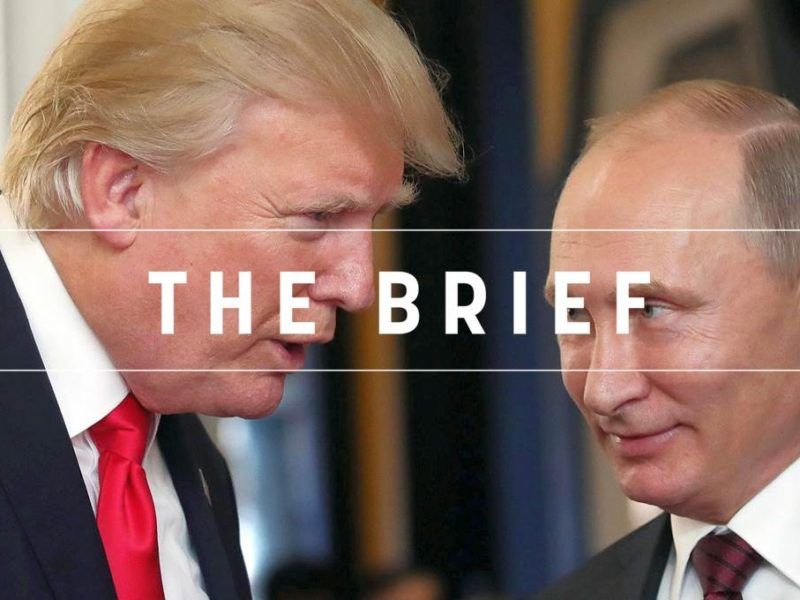 The Brief – This week everything is possible

A terrible week ahead of us will keep Europeans on their toes.

German Foreign Minister Heiko Maas has warned Trump against making any unilateral deals with Russia that come with a cost for the United States’ Western allies.

Alone in the room

The meeting comes just days after 12 Russian intelligence officers were charged by a US federal grand jury for hacking the Democrats ahead of the 2016 election, the most detailed US accusation yet that Moscow meddled in the election to help Trump.

When asked by CBS if he would ask Putin to extradite the Russians to the United States, Trump said he might. Russia’s constitution forbids the extradition of its own citizens.

“I hadn’t thought of that,” Trump said. “But certainly, I’ll be asking about it.”

The top Democrat on the Senate Intelligence Committee, Mark Warner, said he was worried about Trump being alone in the room with Putin, without his national-security aides.

“We know that Trump doesn’t do a lot of prep work for these meetings. He kind of goes in and wings it,” Warner said on NBC’s “Meet the Press. “I really would feel much better if there were other Americans in the room.”

The president has repeatedly said the investigation into Russian election meddling is a “rigged witch hunt” that makes it hard for him to do substantive deals with Moscow.

For Putin, the fact that the summit is even happening despite Russia’s semi-pariah status among some Americans and US allies is a geopolitical win because, in Russian eyes, it shows that Washington recognises Moscow as a great power whose interests must be taken into account.

For Russia, it is also a powerful sign that Western efforts to isolate Moscow have failed.

Putin emerges stronger from a successful FIFA world cup hosted by Russia and won yesterday by France against Croatia, in the presence of French President Emmanuel Macron.

“Thank you Mr President for your kind words,” Putin said in English, which he rarely uses in public.

Putin said that myths and stereotypes about his country had been dispelled.

“In Russia, we are always glad to see our friends, both old and new, now that we have so many more of them,” Putin said.

Tusk said in Beijing that the world needs trade reform, not confrontation.

Europe and China, America and Russia, today in Beijing and in Helsinki, are jointly responsible for improving the world order, not for destroying it. I hope this message reaches Helsinki. https://t.co/whPzfDzcfW pic.twitter.com/QmzlvNkkac

One response to “On eve of Russia summit, Trump calls EU ‘a foe’”