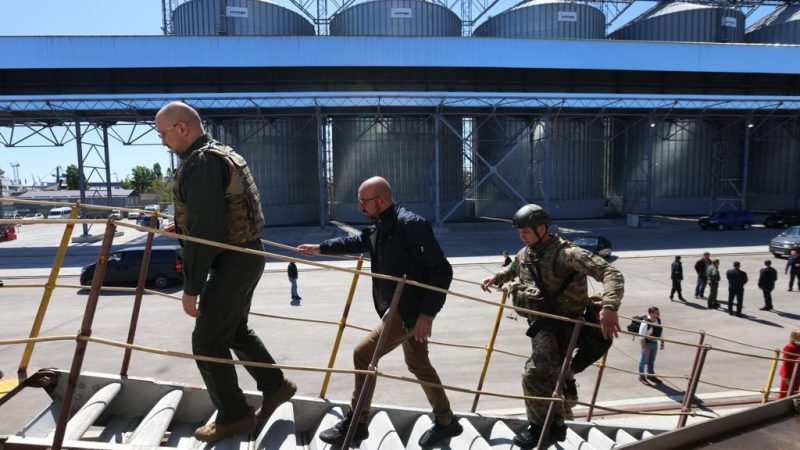 European Council President Charles Michel, who made a surprise visit to Odesa on 9 May 2022, was forced to break off a meeting and take cover when missiles again struck the southern Ukrainian city. [Twitter account of the Council President]

European Council President Charles Michel, who made a surprise visit to Odesa on Monday (9 May), was forced to break off a meeting and take cover when missiles again struck the southern Ukrainian city, an EU official said.

“During the meeting with the PM, the participants needed to interrupt the meeting to take shelter as missiles struck again the region of Odesa,” the official said.

President Volodymyr Zelenskyy, who joined their talks by video conference, thanked Michel for visiting Ukraine on Victory Day, the anniversary of the defeat of Nazi Germany in World War II.

“I am very pleased that today the European Union, at the highest level, supports Ukraine at a time when manifestations of Nazism, unfortunately, exist and are being revived,” he said in a statement from his office.

During the talks, both sides discussed “the importance of taking immediate measures to unblock Ukraine’s ports for grain exports,” the statement said.

Russia’s blockade of Ukraine’s Black Sea ports has forced its grain exporters to look for alternatives to move their precious cargo.

The cargo is loaded onto trains, lorries or barges and taken to Romania, now a vital maritime export hub for Ukraine’s crops.

In the port of #Odesa with @Denys_Shmyhal, I saw silos full of grain, wheat and corn ready for export.
This badly needed food is stranded because of the Russian war and blockade of Black sea ports. Causing dramatic consequences for vulnerable countries. We need a global response. pic.twitter.com/k8dz03d2Cj

During the visit, Michel was shown around the port and “was able to witness first-hand the impact of Russia’s war on global supply chains,” the EU official said.

“The many tonnes of grain stranded in the port due to the Russian blockade of the Black Sea not only damage Ukraine’s economy but equally hamper the world’s access to vital food and endanger food security worldwide,” the official said.

Before the war, Ukraine exported 4.5 million tonnes of agricultural produce per month through its ports – 12% of the world’s wheat, 15% of its corn and 50% of its sunflower oil.

But the invasion has crippled its export ability with Russia’s destruction of transportation infrastructure and its blockade on Odessa, the main port for grain exports.

The conflict has sent the price of food soaring.

The UN’s World Food Programme on Friday called for the reopening of ports in the Odessa region, saying “hundreds of millions of people globally” depend on Ukraine’s grain supplies.

The EU leader was also briefed by Ukraine’s navy chief on “the damage caused by Russian missiles fired from the sea and was able to witness first-hand the wanton destruction of a residential building and the impact on innocent civilians”, the EU official said.