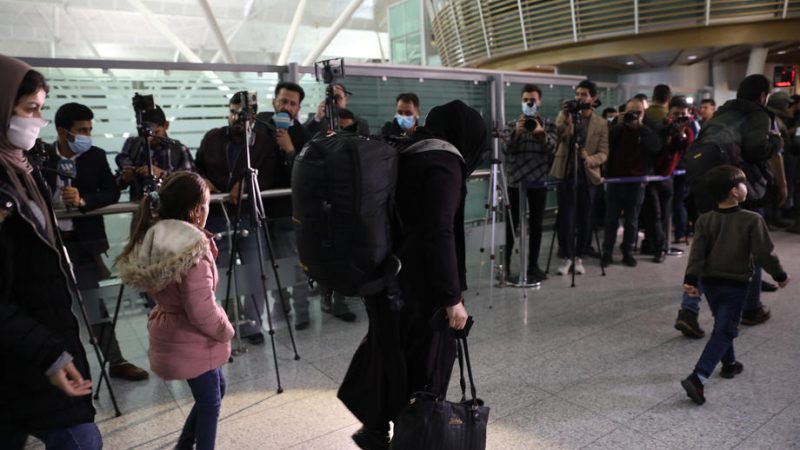 Iraqi migrants arrive at Erbil International Airport, Erbil, Iraq,18 November 2021. The Iraqi Airways plane brought back home a number of Iraqi citizens as part of Iraqi authorities? efforts in helping its citizens, who have been stranded at the border between Belarus and Poland in the hope of getting into the EU. [EPA-EFE/Gailan Haji]

A makeshift migrant camp on Belarus’ border with Poland has been cleared, Minsk said Thursday (18 November), as hundreds of Iraqis who failed to make the crossing to enter the European Union returned home.

Hope for de-escalating the crisis, which has seen thousands camping in desperate conditions on the border for weeks, had been mounting in recent days, after German Chancellor Angela Merkel spoke with Belarus leader Alexander Lukashenko twice by phone. 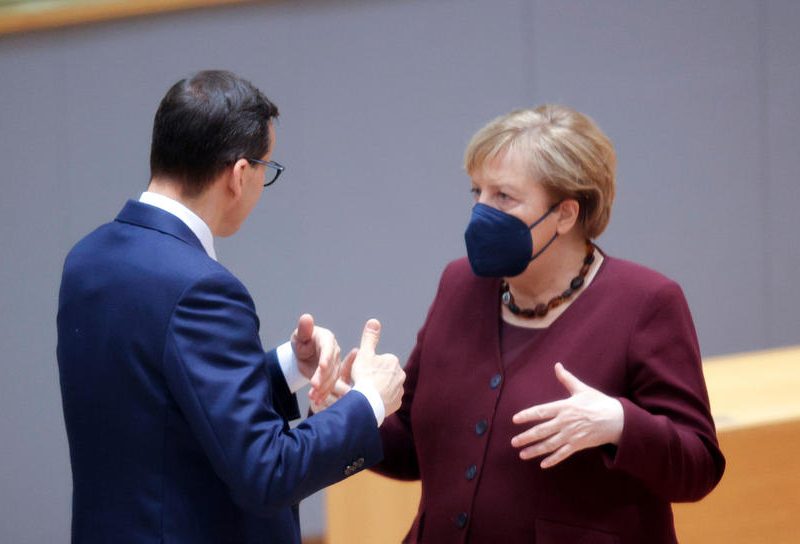 In wrinkle to Merkel, Morawiecki warns against direct talks with Lukashenko

Polish Prime Minister Mateusz Morawiecki on Thursday (18 November) cautioned against holding direct talks with Belarus on the unprecedented migrant crisis along Poland’s border, saying it would “legitimise” the regime.

The EU accuses Belarus of engineering the situation at the border in retaliation for sanctions on the ex-Soviet country. Minsk and its main ally Russia have rejected the charges and criticised the EU for not taking in the migrants seeking to cross over.

Around 2,000 people, mainly Iraqi Kurds, had been stuck in freezing temperatures at a camp in the woods near Brouzgui crossing point, hoping to pass into EU member state Poland.

But on Thursday the Belarusian border force announced that the camp had been cleared, with its occupants relocated “on a voluntary basis” to a reception centre nearby where they were given hot food and warm clothes.

Pictures of the camp looking abandoned were released and Polish authorities confirmed it had been emptied.

The relocation came the same day as the first repatriation flight from Belarus, carrying 431 people, landed in Iraq.

“The situation was very bad, we had to eat grass and leaves from the trees, and it was cold,” one returning resident of Arbil told AFP.

In another sign of the grim conditions at the border, a Polish NGO said it had found a Syrian couple who had lost their one-year-old child while sleeping in the forest on the border for a month.

The flight came a day after the second of Merkel and Lukashenko’s calls — the first time the Belarus leader has spoken with a Western leader since disputed presidential elections last year.

On Thursday, Lukashenko’s spokeswoman Natalya Eismont said that there were about 7,000 migrants in the country, including those at the border.

She said Belarus would take responsibility for sending 5,000 of the migrants home if they want to go, and alleged Merkel would negotiate with the EU on creating a humanitarian corridor to Germany.

But Berlin denied any agreement with Lukashenko on the possibility of such a corridor, saying it “stood by” its neighbour Poland.

The Polish government has also warned against any agreement on the crisis that might be struck “over our heads”.

Warsaw warned Minsk that if the crisis was not resolved by Sunday, it would halt rail traffic with Belarus.

The EU and the United States also issued fresh warnings on Thursday.

The EU and foreign ministers of the G7 global powers called on Lukashenko’s regime “to cease immediately its aggressive and exploitative campaign”.

US Secretary of State Antony Blinken told reporters on a visit to Nigeria that the US could add to sanctions already imposed on the country.

“This effort to weaponise migration has to stop,” he said. “First and foremost, it is doing a terrible injustice to these people that it has victimised by making them pawns.”

The Polish border guard said Thursday that 200 migrants were detained after entering the country illegally, part of a group of around 500 who had attempted the crossing.

The defence ministry alleged Belarusian special forces had led the attempt, saying they had first carried out reconnaissance and “most likely” damaged the barbed wire fence along the border.

“Then the Belarusians forced the migrants to throw stones at Polish soldiers to distract them. The attempt to cross the border took place several hundred metres away,” it said.

It added that a family of five people, including three children aged between seven and nine, had been injured in the incident and were taken to hospital.

Polish media say at least 11 migrants have died since the crisis began in August.

The president of the European Parliament, David Sassoli, called for “the inhumanity” to stop.

“It is heartbreaking seeing a child die in the cold at the EU’s doorstep,” he said on Twitter.

I am following the tragic reports from the Polish-Belarusian border, where a one-year-old was found dead in the forest. It is heartbreaking seeing a child die in the cold at the EU's doorstep.

The exploitation of migrants and asylum seekers must stop, the inhumanity must stop.