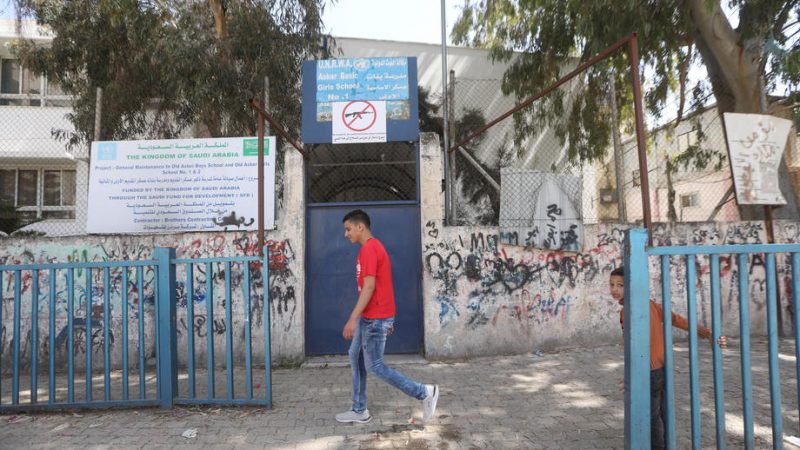 UNRWA provides education for over 550,000 young Palestinians across the region. [EPA-EFE/ALAA BADARNEH]

The collapse of the international agency responsible for Palestinian refugees due to chronic underfunding by UN countries could lead to unpredictable consequences in an already unstable region, experts and officials warn.

Last November, the UN relief and works agency for Palestinian refugees, which operates in Gaza and the West Bank, as well as surrounding countries, was on the verge of ceasing operations over lack of financial resources. Its immediate collapse was avoided then but long-term solutions are yet to be found.

“The strong political support [for the agency] is not translated into matching resources,” UNRWA commissioner-general Philippe Lazzarini told EURACTIV.

The agency depends on voluntary contributions from UN member states to provide services such as education and healthcare, which the host countries are unable to provide.

By providing these basic services to refugees, the agency keeps “the situation fairly acceptable in the eyes of the international community and key regional actors,” said Michael Dumper, professor of Middle East politics at the University of Exeter.

“UNRWA stabilises what would be a very critical political situation,” he added.

However, years of underfunding are putting the agency in an increasingly precarious position, to the point that it cannot guarantee the wages of its staff anymore.

Lazzarini fears the situation could deteriorate further and reach a “tipping point” where costs can no longer be covered, causing the “implosion of the organisation or push it into a situation where we will be unable to cover the needs.”

“The region in which we operate is a highly volatile one that cannot afford another crisis with unpredictable consequences,” said Lazzarini.

UNRWA was created as a temporary aid agency for displaced Palestinians after the 1948 conflict, but its mandate has been renewed ever since, as Israeli-Palestinian tensions remain unresolved.

The agency counts over 30,000 staff, mostly teachers and health workers, and assists up to 5.6 million people registered as Palestine refugees.

Beside food assistance and emergency cash, UNRWA is currently providing education to over 550,000 young Palestinians in the region and primary health care to more than 2 million refugees.

However, the growing population of Palestinian refugees is placing an upward pressure on UNRWA’s budget. In Gaza alone the agency welcomes 3000 new children to its schools annually.

“Our costs will continue to increase with the increased needs of the refugees and if there are no alternatives for the refugees to access these services differently, UNRWA will be put in a more and more impossible situation”, Lazzarini said.

The agency currently has a deficit of $100 million on a $806 million budget, according to Mathias Burchard, director of the agency’s EU office.

For 2022, UNRWA has obtained only $49 million of the $365 million it asked for the refugees in Syria, Jordan and Lebanon.

The agency has cut its costs by $600 million in the last six years in an effort to guarantee continued humanitarian aid.

“This came at a high price, in terms of cutting away costs in our maintenance, increasing dramatically the class sizes and so forth,” Burchard said during a press briefing ahead of the Brussels Conference on the Future of Syria on 10 May.

The financial crisis is also affecting healthcare services. In Gaza, for example, the chief of the UNRWA health programme, Ghada Al Jadba, said the financial restraints are “another kind of suffering” for traumatised refugees.

“I feel all the time that I am under attack and attacks are not necessarily airstrikes,” she told EURACTIV, adding that she is “expecting every day to have austerity measures.”

“As chief of the programme I am struggling to try to provide very basic critical life-saving services with very, very limited resources,” she said.

To make matters worse, the war between Russia and Ukraine has disrupted regional food supply and affected UNRWA’s funding, with several countries delaying pledges or diverting monies towards the crisis at the EU’s eastern border.

While the EU and its member states remain one of the top contributors to the UN agency, with €356 million donated collectively in 2021, Burchard said there has been “a stark drop in EU funding.”

EU support to the agency decreased significantly after the EU Regional Trust Fund in response to the Syrian crisis came to an end in 2021.

UNRWA is now appealing to the EU to at least maintain the previous years’ funding levels.

Professor Dumper said if the EU were to not fund UNRWA “it’d be a complete crisis, a bit like with Trump withdrawing”.

The US government decided to cut funds to the UN agency back in 2018 despite the opposition of the hosting countries and the Israeli intelligence services who feared school closures would be “a recipe for radicalisation.”

That position was reversed by President Joe Biden in April 2021.

Dumper said the agency should also start diversifying its income sources, by reaching out to international financial institutions like the World Bank.

Last month, Lazzarini said the agency cannot continue to count on voluntary funding solely, hinting at the possibility of delegating some services to other UN organisations.

“One option that is currently being explored is to maximise partnerships within the broader UN system,” he said in a message to Palestinian refugees.

Despite explaining that this would not imply a “transfer of responsibilities,” the statement sparked outrage among Palestinians, fearing the move would ultimately put an end to the agency.