Federica Mogherini and Mahmud Abbas in Brussels on 22 January 2018. [Council]

Palestinian leader Mahmud Abbas on Monday (22 January) urged the EU to “swiftly” grant official recognition to the state of Palestine as he sought support in Brussels amid a bitter row with Washington over the US plan to move its embassy to Jerusalem.

Abbas told EU diplomatic chief Federica Mogherini that the Palestinians were still committed to the stalled Middle East peace process and urged the bloc to take a more “political” role.

His mission to meet Mogherini and the 28 EU foreign ministers came as US Vice President Mike Pence told the Israeli parliament that Washington would move its embassy from Tel Aviv to Jerusalem “by the end” of 2019, a step fiercely opposed by Palestinians.

In an interview with AFP on Sunday in Brussels, Palestinian foreign minister Riad al-Malki said the EU recognising the state of Palestine would be “a way to respond” to US President Donald Trump’s declaration of Jerusalem as the Israeli capital. 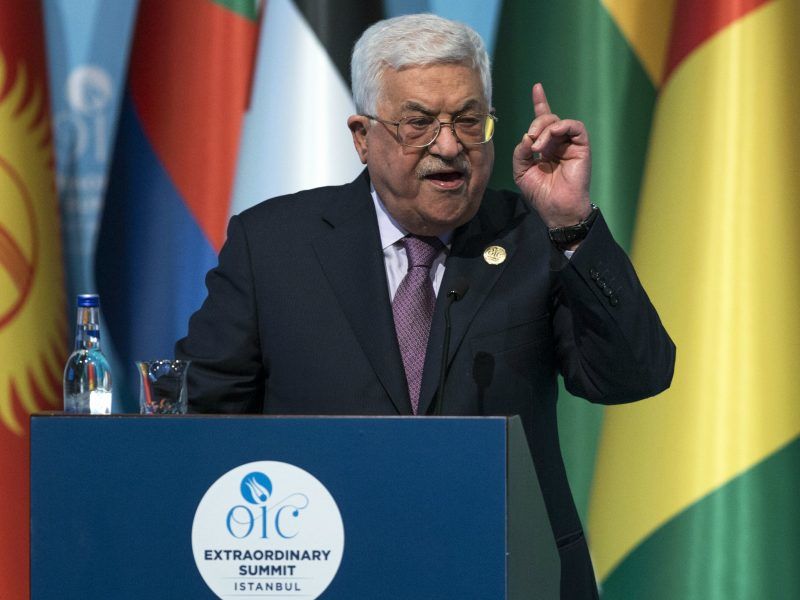 “We truly consider the European Union as a true partner and friend, and therefore we call its member states to swiftly recognise the state of Palestine and we confirm that there is no contradiction between recognition and the resumption of negotiations,” Abbas told reporters on Monday.

The 82-year-old Abbas met Mogherini for one-on-one talks before joining the bloc’s foreign ministers for lunch on the sidelines of their monthly meeting, after Israeli Prime Minister Benjamin Netanyahu made a similar trip last month.

Abbas said the Palestinians were still “keen on continuing on the way of negotiations” and committed to “fighting terrorism, violence and extremism locally, regionally and internationally”.

Recognition by EU not on the agenda

But as expected, recognition for Palestine was not forthcoming and there was also no discussion of an “association agreement” with the bloc — mooted beforehand as a way of giving Abbas something to take away.

Mogherini said the focus had been on how the EU could help relaunch direct talks between the Israelis and Palestinians.

She added that debate about a possible association agreement would go on within the bloc in the coming weeks.

The EU foreign affairs chief said the two sides needed “to show more than ever before their engagement with the international community” to work for peace.

After Washington froze funding to the UN agency for Palestinian refugees, Mogherini told Abbas he could count on the EU to continue its financial backing, but warned it was “not possible to imagine” the bloc could cover the shortfall resulting from Washington’s decision.

The EU and its member states are collectively the Palestinians’ largest donors, Mogherini said, with nearly €359 million in support given in 2017.

The Palestinian leadership has said it will not accept the Trump administration as a mediator in peace talks with Israel and wants an internationally led process.

“The Palestinians are looking to move away from a US-led process to a more a multilateral process and there does appear to be a greater willingness on the EU side to look at such a process,” said Hugh Lovatt, Israel Palestine Project Coordinator at the European Council on Foreign Relations.

Trump’s son-in-law and senior adviser Jared Kushner has been working for months with a small team to develop a new US proposal to revive peace talks between Israel and the Palestinians, but no details or even news of progress have emerged.

A senior EU official said Friday the bloc “believes a plan is in the making” but is still in the dark about “the content of this plan or the parameters”.

The Slovenian government hopes MPs will vote to recognise the Palestinian state and become only the second country to do so as an EU member state, Slovenian Foreign Minister Karl Erjavec said yesterday.

“Everybody (other EU member states) backs such a Slovenian step that will happen if parliament green lights the proposal for recognising the Palestinian state,” Erjavec told private channel POP TV.

The minister was speaking from Brussels, where Erjavec and Abbas had a bilateral meeting.

Of the 28 EU member states, Sweden was first to officially recognise the Palestinian state in 2014. Eight other countries took the step before entering the EU: the Czech Republic, Slovakia, Hungary, Bulgaria, Romania, Malta and Cyprus.

Slovenia’s parliamentary foreign affairs committee will meet in Ljubljana on 31 January to approve the proposal before sending it to parliament, which could vote on the issue in a session in March or April, according to Slovenian RTV public television.

“By recognising it, (Slovenia) would strengthen Palestine’s negotiation in the Middle East peace process. We have an independent foreign policy, we do not need any other state to cover our back,” Erjavec said.