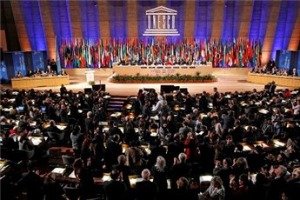 “It is a crime and a typical collective punishment,” Nabil Sha’ath, the foreign policy chief for the Palestinain Authority's governing Fatah movement, told EURACTIV, referring to the withdrawal of US funding to the organisation.

“The US supported the right of the Cook Islands, a small trusteeship of New Zealand in the Pacific, to full UN membership and when the Palestinians apply [to UNESCO], they cut all funding? This is ridiculous and outrageous”, he said.

Earlier on 31 October, the United Nations Educational, Scientific, and Cultural Organisation (UNESCO) voted by a majority of 107 to 14 in favour of granting ‘Palestine’ full membership of their body, a move that boosts their bid for full UN recognition later this month.

Fifty-two countries abstained from the vote that Sha’ath described as a “test case” for a bid to attain full UN membership later this month.

EU member states were divided in the final UNESCO vote with countries such as Germany and the Netherlands voting against, France voting in favour, and Britain and Italy abstaining.

Shortly after the UNESCO vote, a US State Department official familiar with the issue told EURACTIV that the US would now be legally obliged to withdraw the $80 million it annually gives the UN body – about 22% of UNESCO’s funding.

“My understanding is that today’s [UNESCO] action does trigger the legislative restrictions which will cut off funding,” he said.

“As a result, the US would not be able to move forward on funding tranches that ordinarily would be made to UNESCO at this time.”

Israel also announced after the vote that it would now reconsider its cooperation with UNESCO. The country’s ambassador to UNESCO, Nimrod Barkan, called the vote “a tragedy”.

It was unclear whether a common position on the US decision to withdraw funding would emerge from Brussels.

“We call on everyone to continue to support UNESCO’s mission on building peace, eradicating poverty, and intercultural dialogue,” an EU spokesman told EURACTIV: “We therefore urge all parties to pause for reflection before taking any action.”

Behind the scenes, the EU is backing efforts to restart negotiations through the Quartet – the US, UN, EU and Russia – and offering to “further develop bilateral relations with the PA,” as a sweetener.

But in common with Washington, the EU believes that UN recognition of a Palestinian state should follow a negotiated deal between Palestinians and Israelis, and that membership of bodies such as UNESCO should follow that.

The Palestinians say that 20 years of talks have bequeathed them nothing but a mushrooming of Jewish settlements, and a corresponding loss of their land.

“The Europeans cannot unite against us and apparently they cannot unite with us,” Sha’ath said. “This is unfortunate.”

He called on the EU to “get its act together” and “take a bolder step” in the Middle East, at a time when the US was preoccupied with re-election campaigns.

“The EU does not want to anger the US,” he said. “But this would have been the right time for Europe to engage in a different way from the Americans.”

However, the EU is also mindful of national-religious sensitivities within Israel to sovereignty over world heritage sites in the West Bank.

These include: the Church of the Nativity in Bethlehem where Jesus is said to have been born; the Tomb of the Patriarchs in Hebron, where Abraham, Isaac and Jacob (and their wives) are thought to have been buried; the Dead Sea, one of the region’s most popular tourist destinations; and, ultimately, the Al-Aqsa Mosque/Western Wall in East Jerusalem, which is the third holiest site in Islam, and holiest site for many religious Jews.

“Sovereignty over these very important sites is disputed,” Yoel Mester, the political counsellor to Israel’s ambassador in Brussels told EURACTIV.

Under interpretations of international law accepted by all countries except Israel, the territory on which the holy sites are located is Palestinian.

“We also have a claim to these same sites,” Mester insisted, “so before rushing to an international forum like UNESCO, the best thing would be for the two parties to settle their conflicting claims to the same territories and sites.”

The US withdrawal of funding to UNESCO was “a proof […] that this unilateral move by the Palestinians only serves to complicate things.”

On 11 November, the UN Security Council is expected to vote on whether to grant a Palestinian state full membership rights. If the requisite majority is obtained, the US is expected to veto the move.

Sha’ath said that if that happened, the Palestinians would pursue a membership bid in the UN General Assembly, as this would give them access to international bodies such as the International Court of Justice in The Hague.

“I don’t know if we will [push for a vote] immediately but we will go eventually to the Assembly,” he said.

If that failed, he refused to rule out the possibility that Abbas might dissolve the Palestinian Authority itself.

“It is an option,” he said. “There are many others that are probably more constructive but when one loses hope and despairs in the mechanisms of the international community, one must have options.”

On 2 December, the nascent Palestinian ‘state’ will receive the de facto endorsement of the Mercosur nations of South America, when a free-trade agreement is signed in Montevideo, he said.

The administration of US President Ronald Reagan originally ordered the pullout to protest what it called UNESCO's "anti-US" politicization and "extravagant budgetary mismanagement" under then-director-general Amadou Mahtar M'Bow of Senegal.