Pentagon warns EU against blocking US firms from defence fund 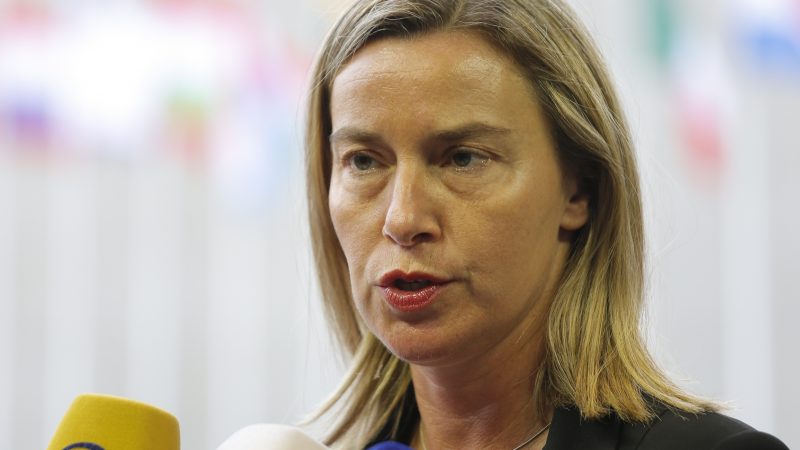 Federica Mogherini, High Representative for Foreign Affairs and Security Policy, speaks to the media at the start of the EU Foreign Affairs Council meeting, 14 May 2019. [EPA-EFE/JULIEN WARNAND]

In the latest sign of the deteriorating transatlantic relations, Washington has warned its European allies that a new European military pact risks shutting American companies out of defence contracts and undermining NATO, and has hinted at possible retaliation.

In a letter sent this month to the EU’s foreign affairs chief, Federica Mogherini, Washington said it was “deeply concerned” that approval of the European Defence Fund (EDF) rules and the Permanent Structured Cooperation (PESCO) would “produce duplication, non-interoperable military systems, diversion of scarce defence resources and unnecessary competition between NATO and the EU”.

The US government said limitations under consideration on the involvement of non-EU countries in the European pact amounted to “poison pills”.

“It is clear that similar reciprocally imposed US restrictions would not be welcomed by our European partners and allies, and we would not relish having to consider them in the future,” said the letter from two US Department of Defense undersecretaries, Ellen Lord and Andrea Thompson.

Any rules limiting US defence contractors’ participation would also amount to “a dramatic reversal of the last three decades of increased integration of the transatlantic defence sector.”

Already in February last year, the Trump administration warned EU governments that Washington should play a central role in the European pact.

The US letter, which warns Brussels against damaging burgeoning EU-NATO ties, is the most vocal US opposition to the EU accord signed in December 2017 to fund, develop and deploy armed forces together.

EU governments are trying to agree legislation by June on how to allow the involvement of non-EU countries, including the United States and Britain, after the latter leaves the bloc.

“I hope the decision can be taken as soon as possible,” Federica Mogherini replied to the concerns discussed during an EU defence ministers meeting in Brussels on Tuesday (14 May). “The less uncertainty there is, the better, because I think it is creating unnecessary agitations.”

“But obviously, we are preparing together with the Commission, in agreement with member states, a clear and complete reply to the concerns of the US administration,” Mogherini told reporters.

Washington is pressing for US companies to be given the chance to join some of the new EU projects such as the European Defence Fund (EDF).

It is also possible for third-country companies, for example from the US, to benefit from the fund, on condition that they participate in a consortium and the money goes to their affiliated EU partners.

US concerns about being frozen out of the European pact, known formally as Permanent Structured Cooperation (PESCO), and its multi-billion euro defence fund, have sown confusion in Brussels, which is also the headquarters of NATO.

One European government official said the letter showed a “misunderstanding of how the European Union works” because the defence pact and fund were only one way to coordinate with the United States.

“They are reading language into it (the pact) that fences the European continent off from American cooperation, and that is not true,” the official told Reuters.

Mogherini said:  “Let me be very clear already, and we share this with member states, that the EU is and remains open to US companies and equipment”.

“In the EU, there is no “Buy European Act” – and around 81% of international contracts go to US firms in Europe today,” she said.

EU and NATO officials have repeated the need for coherence in Europe’s future defence cooperation. However, crucial decisions on EU military project participation and funds have been delayed, also due to the stalemate over Brexit.

Unlike with past attempts at European defence integration, NATO Secretary-General Jens Stoltenberg has publicly backed the defence pact as long as it does not lead to duplication and aims to fill the gaps in NATO efforts on the continent.

One such effort, also highlighted in the EU-NATO Joint Declaration signed in Warsaw in 2016, was agreed at a European Defence Agency (EDA) board meeting on Tuesday (14 May).