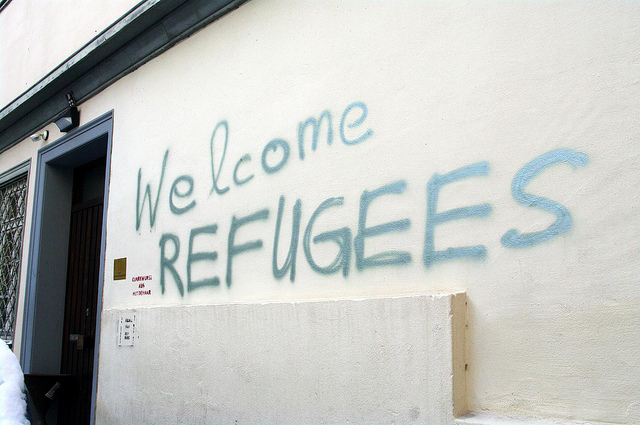 They stopped sailing at the end of September due to the 400,000 monthly cost of running the rescue operation, but are now raising funds to return to action in March and “give thousands more people a new shot at life”.

As of September this year, a record number of 3,072 migrants had drowned trying to cross the Mediterranean Sea, up from 2,360 last year, according to the International Organisation for Migration.

“I was particularly struck by the men and women who had to drop everything and sell all their belongings to take their families on this journey,” Christopher Catrambone told the Thomson Reuters Foundation.

Recalling an elderly Syrian couple who had to leave their hometown, Christopher said it was difficult to comprehend the desperation that would have driven them to undertake such a dangerous journey.

“Yet in a way these are the lucky ones, who had the financial means to fund the trip. It saddens me to think about the hundreds of thousands stuck in refugee camps in Lebanon, Turkey and Jordan.”

The couple said they felt compelled to act following an appeal by the Pope after several hundred African migrants drowned off the Italian island of Lampedusa in October 2013.

They spent millions of euros on a 40-metre ship, the Phoenix, equipped with rescue dinghies and drones, manned by a professional crew and coordinated by retired Brigadier Martin Xuereb, a former commander of the Maltese armed forces.

The couple – Regina is Italian and Christopher a US citizen from New Orleans – settled in Malta seven years ago, making it the hub of their specialised insurance business and humanitarian interests.

They said the MOAS mission had become even more relevant with the winding down last month of Mare Nostrum, the Italian government’s initiative to save lives at sea.

Italy said it would close the rescue mission, which saved the lives of more than 100,000 migrants from Africa and the Middle East, in order to make way for a smaller European Union scheme and relieve the strain on the country’s public finances.

“Now that we have proven what we can do, we hope people understand the need to help out in this non-governmental action for humanity,” Regina said.

The Catrambones said they needed to raise 1.5 million to fund three months of operations, and said they could expand their mission to other parts of the world in the future if they received the necessary funding.

Britain’s foreign ministry said last month it would not support search and rescue operations in the Mediterranean because they encouraged migrants to make the potentially fatal voyage.

So far this year, more than 100,000 migrants have arrived in Italy by sea, according to the U.N. refugee agency, surpassing the previous record of around 62,000 in the whole of 2011, the year of the Arab Spring uprisings.