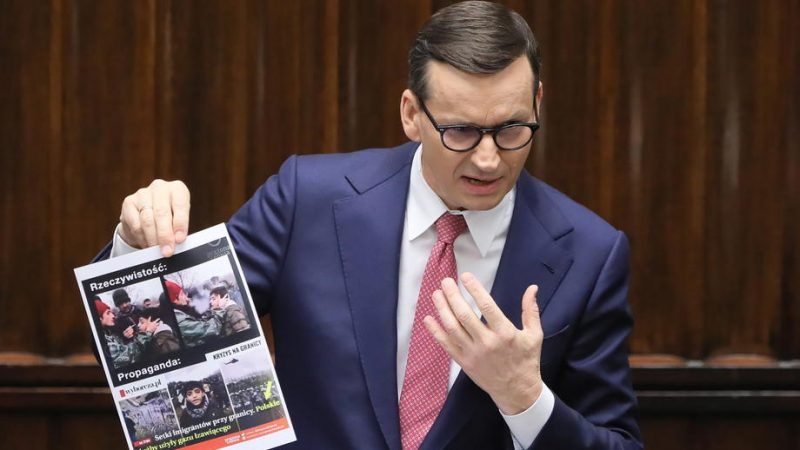 Polish Prime Minister Mateusz Morawiecki speaks during a session of the Sejm (lower chamber) in the building of the Sejm of the Republic of Poland in Warsaw, Poland, 9 November 2021. During the 41st session of the Sejm, the deputies are to hear the government's information on the situation on the Polish-Belarusian border and on the actions taken. [EPA-EFE/PAWEL SUPERNAK]

The accusation came as thousands of desperate migrants were trapped in freezing weather on the Belarus-Poland border, where the presence of troops from both sides has raised fears of a confrontation.

Western critics have for months said Belarus’s strongman leader Alexander Lukashenko is luring migrants from the Middle East to his country and then sending them across the border in retaliation for EU sanctions.

Morawiecki visited guards, troops and police at the border on Tuesday before turning his sights on Russia, Belarus’s main international backer.

“This attack which Lukashenko is conducting has its mastermind in Moscow, the mastermind is President Putin,” Morawiecki told the Polish parliament.

He said migrants were being used as “human shields to destabilise the situation in Poland and the EU”.

Germany, which accused Lukashenko of “unscrupulously” exploiting migrants by sending them to the Polish border, called Wednesday for new EU sanctions against Belarus.

“Lukashenko must realise that his calculations are not working,” German Foreign Minister Heiko Maas said. “The European Union cannot be blackmailed.”

EU diplomats told AFP the bloc was working to expand the existing sanctions. The EU said it was also pushing more than a dozen countries, mainly in the Middle East and Africa, to prevent their nationals from leaving for Belarus.

The EU accuses Lukashenko of trying to destabilise the EU by encouraging migrants to its borders — especially Poland and Lithuania — in retaliation for sanctions imposed on Belarus over his regime’s dismal human rights record.

A video appeared online, reportedly taken on November 6-7. Hundreds are waiting for flights in Damascus organized by coordination between Belarus, Russia, and Assad. Their destination is Minsk, and from there to the Polish border. Most of them are Iraqi Kurds. pic.twitter.com/04ky87HjWC

“This is part of the inhuman and really gangster-style approach of the Lukashenko regime,” European Commission spokesman Peter Stano told journalists Tuesday.

Belarus denies the claims and accuses Poland of violating human rights by refusing to allow the migrants in.

“We are not seeking a fight,” Lukashenko told the state news agency Belta.

“I am not a madman, I understand perfectly well where it can lead,” he added.

“But we will not kneel.”

“Why, when it comes to refugees heading to the European Union from Turkey, did the EU provide funding to keep them on Turkish territory?” he told reporters.

“Why can’t the Belarusians be helped in the same way?”

The crisis came to a head on Monday when hundreds of migrants attempted to cross the border but were blocked by rows of Polish police, soldiers and border guards behind barbed wire.

Both Poland and Belarus said Tuesday that between 3,000 and 4,000 migrants were now in an improvised camp at the border, near the Polish village of Kuznica.

Journalists have been blocked from the area, but videos released by Belarusian and Polish authorities showed the migrants massed along the razor-wire, huddling by fires and in tents as temperatures hovered around freezing.

Hundreds of migrants camped out near the Belarus border with Poland in freezing overnight temperatures as the Polish Prime Minister visited the border and officials warned tension could increase in coming days https://t.co/MlOonilPpy 1/6 pic.twitter.com/0TrgWDhF8E

The Belarusian border guard service said the migrants in the camp were mostly Kurds, that their physical and mental condition was “extremely poor”, and they lacked water, food and the means to wash themselves.

“The situation is aggravated by the large number of pregnant women and infants among the refugees, who must spend the night on the ground in negative temperatures,” it said.

Thousands of migrants have crossed or attempted to cross from Belarus into the eastern EU member states of Latvia, Lithuania and Poland in recent months.

Lithuanian lawmakers voted Tuesday to impose a state of emergency along the Belarus border, effective from midnight.

Some migrants who made it into Poland told AFP last month that they had been trapped in the woods for a week, with Belarus refusing to allow them to return to Minsk and fly home, while Poland would not let them cross to make asylum claims.

Warsaw has drawn sharp criticism for its hardline approach to the crisis that has seen guards routinely push back migrants and refugees on the border.

Was the 2015 Arctic Migration Route via Russia’s Kola Peninsula to 🇳🇴 #Storskog and 🇫🇮#Salla a Pilot-test of what we now see on the border between Belarus and 🇵🇱🇱🇹? Stop using innocent people in battlespace to obtain political objectives. pic.twitter.com/J5C9wT5s5c