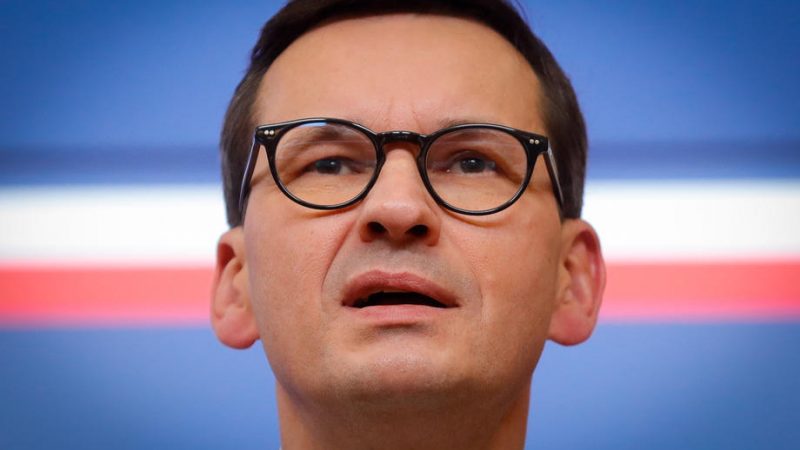 File photo. Polish Prime Minister Mateusz Morawiecki gives a press conference at the end of the second day of a European Union leaders meeting at the Polish Permanent Representation to the EU in Brussels, Belgium, 22 October 2021. [EPA-EFE/STEPHANIE LECOCQ]

Polish Prime Minister Mateusz Morawiecki said on Thursday (18 November) Germany should stop the Nord Stream 2 gas pipeline from Russia to Europe if it wants to work for peace, linking the project to his country’s handling of migrants on the Belarus border.

In an interview with Germany’s top-selling Bild daily, Morawiecki said he feared an escalation of the situation at the EU-Belarus border, where several thousand migrants are stuck.

“We are defending the EU border here in Poland! And speaking of the bigger picture, let’s work together for peace and not give (Russian President) Vladimir Putin extra money through energy payments so he can continue to upgrade,” Morawiecki told Bild.

This means the cessation of the new gas pipeline from Russia. “Nord Stream 2 must be stopped,” he said.

Desperate to resolve what it calls an artificial border crisis created by Minsk, the EU has called on Russia to make Belarus’ president, Alexander Lukashenko, end the crisis.

Moscow denies any direct role but has offered to mediate, while also demonstrating support for Lukashenko by staging military exercises jointly with Belarus near the border.

German Chancellor Angela Merkel spoke to both Lukashenko and Morawiecki, her spokesperson said on Wednesday, adding she had assured Poland of German solidarity.

However, Poland and Ukraine are strongly opposed to the Nord Stream 2 pipeline which runs from Russia to Germany, arguing it increases Europe’s gas dependency on Russia and endangers valuable transit fees for Ukraine.

Morawiecki warned that Europe faced a new migrant crisis if it failed to solve this buildup of people and that the situation, while stable, was growing more threatening.