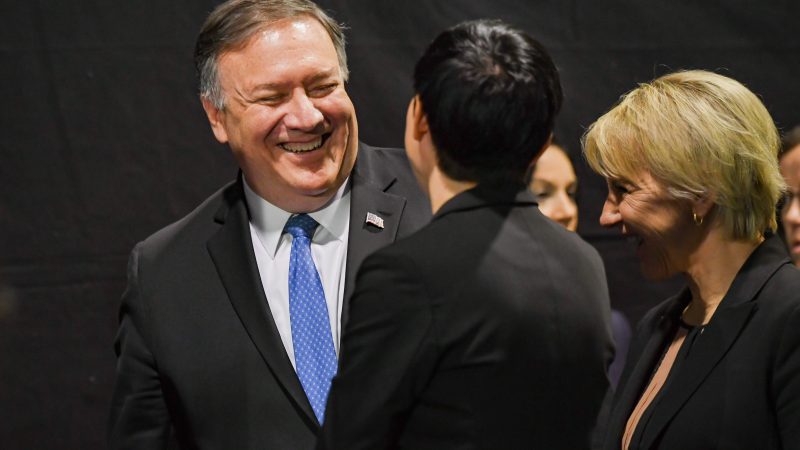 US Secretary of State Mike Pompeo has cancelled a planned visit to Berlin on Tuesday (7 May) due to scheduling reasons and unspecified “pressing issues”, an US embassy spokesman in Berlin said.

According to the German Foreign Office, the discussions were supposed to focus on “the most urgent questions of international politics: for example, the situation in Syria, Ukraine or Venezuela, and relations with Russia or China.”

Asked for reasons for the cancellation provided by the State Department, Merkel’s office issued a brief statement saying the meetings were called off “because of the visit’s cancellation by the US side” while all other inquiries were to be directed to the US embassy in Germany.

“Unfortunately, we must reschedule the Berlin meetings due to pressing issues. We look forward to rescheduling this important set of meetings. The Secretary looks forward to being in Berlin soon,” the US Embassy cited a State Department spokesperson as saying.

“The Secretary looks forward to being in Berlin soon,” she added in a statement.

She gave no further details or explanation for the sudden change of plans.

It would have been Pompeo’s first visit to Germany since taking over office as Secretary of State around a year ago.

The transatlantic relations between Washington and Berlin have been tense since US President Donald Trump took office in 2017.

The disarray between the US and its European allies became even more strikingly evident after US Vice President Mike Pence’s address in Munich. His speech raised European eyebrows as it mostly contained a wish list of things that, in Washington’s eyes, need to be done by Europeans – and in particular by the Germans.

Pompeo had cancelled participation in the Munich Security Conference in February, although he had been on a Europe tour visiting Poland, Slovakia, Hungary, Belgium and Iceland.

The US government accuses Germany, its NATO partner, of insufficient military spending. It also sharply criticises Berlin’s participation in the Russian gas pipeline project Nord Stream 2 and threatens punitive tariffs because of the German trade surplus.

On Monday (6 May), Pompeo’s visit to Europe started with his attendance of the Ministerial meeting of the Arctivc Council in Rovaniemi, Finland, where he met with Russian Foreign Minister Sergei Lavrov.

During the forum, he delivered a speech in which he issued warnings about Russian and Chinese behavior in the Arctic that come amid trade tensions with Beijing and Moscow’s backing for Venezuelan President Nicolás Maduro. He also stressed that Washington is set to “fortifying America’s security and diplomatic presence in the area.”

According to his agenda, Pompeo is due to fly to London on Wednesday (8 May) to meet UK’s Prime Minister Theresa May and Foreign Secretary Jeremy Hunt, with a visit to Nuuk, Greenland on Thursday (9 May). It is, however, unclear whether those meetings will take place.