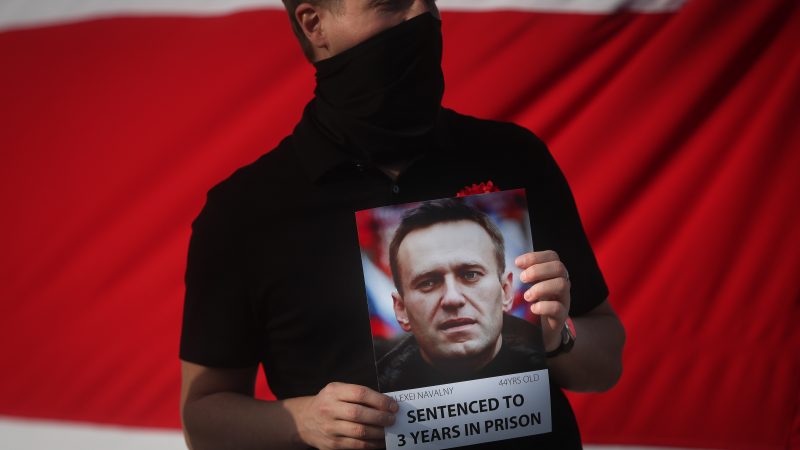 A man holds a picture of the Russian opposition leader Alexei Navalny in a demonstration in solidarity with Belarus' political prisoners, during the visit of Svetlana Tikhanovskaya in Lisbon, Portugal, 6 March 2021. EPA-EFE/MARIO CRUZ [EPA-EFE/MARIO CRUZ]

Authorities in the Portuguese capital admitted on Thursday (10 June) that they had handed over the personal details of three organisers of an anti-Kremlin demonstration to the Russian embassy in Lisbon, a move that has prompted much eyebrow-raising in Brussels.

In a statement, the Lisbon municipality admitted having transferred the activists’ personal details to the Russians, but said it had acted within the rules.

Portuguese MEPs from the centre-right EPP group had previously sounded the alarm that the Lisbon municipality, whose mayor is a close ally of Prime Minister António Costa, had committed a major blunder by passing on the data.

The activists in question organised a demonstration in front of the Russian embassy in Lisbon in support of detained Russian dissident Alexei Navalny after his arrest in January. The activists were three Portuguese citizens, two of whom also hold dual Russian citizenship.

According to Portuguese legislation, the organisers of such protests must send their personal details, including name, ID number, address and telephone number, to the City Council, which then sends the same data to the police and “competent authorities.”

The municipality apparently interpreted the rules as meaning it should send the data not only to the Portuguese police, but also to the Russian embassy in Lisbon, the site of the protest.

Portuguese EPP MEPs are likely to seek to use the blunder as political capital against Lisbon Mayor Fernando Correia, who was Prime Minister António Costa’s deputy when the latter was mayor.

In the statement, Lisbon authorities assured that the practice has been discontinued, and no such personal data were shared with embassies during recent protests against the governments of Angola, Cuba and Israel.

The Portuguese conservative MEPs have petitioned EU foreign affairs chief Josep Borrell, a Spanish socialist, to look into the matter. His spokesperson gave an initial reaction saying this was an issue of data protection, and not foreign affairs.