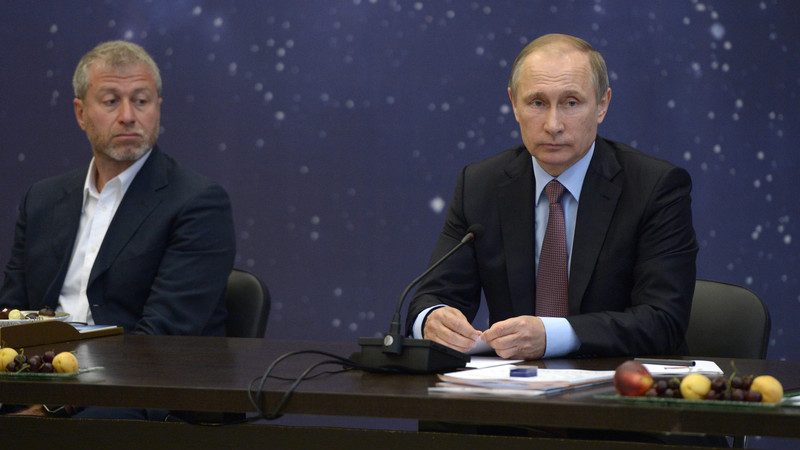 Two sapphires weighing in at almost 23 grams in white gold had been part of the gifts the Russian president brought with him to the wedding of Austria’s then leading politician, alongside a Samovar, a Don Cossack Choir, and flowers. [Kremlin pool/EPA/EFE]

Portugal said on Thursday (10 March) it would not strip the citizenship of Chelsea soccer club owner Roman Abramovich for now because that measure was not part of EU sanctions against Russian oligarchs, but his nationality status could change depending on the outcome of an inquiry.

Britain on Thursday imposed sanctions on the 55-year-old, who has Israeli and Portuguese citizenship, in an escalation of measures against associates of Russian President Vladimir Putin after the Kremlin’s 24 February invasion of Ukraine.

In a statement sent to Reuters, the justice ministry said sanctions imposed by Britain on Russian-born Abramovich did not apply outside the United Kingdom due to its exit from the European Union.

The bloc, of which Portugal is a member, has not imposed sanctions on Abramovich but it has blacklisted a number of other so-called oligarchs. The sanctions do not include stripping them of any EU member state citizenships that they hold.

Abramovich was granted Portuguese citizenship in April 2021 based on a law offering naturalisation to descendants of Sephardic Jews who were expelled from the Iberian peninsula during the mediaeval Inquisition.

There is little known history of Sephardic Jews in Russia, although Abramovich is a common surname of Ashkenazi Jewish origin.

The Portuguese prosecutor’s office in January opened an investigation into the granting of citizenship to Abramovich. On Thursday, a Portuguese government source told Reuters Abramovich’s citizenship could be stripped depending on the outcome of the inquiry.

A spokesperson for Abramovich did not immediately reply to a Reuters request for comment.

Joao Paulo Batalha, an anti-corruption expert and vice president of Civic Front, an association that denounces wrongdoing in public life, told Reuters the Portuguese government should implement measures of its own, whether or not the EU ends up adding Abramovich to its list of sanctioned oligarchs.

He said Abramovich’s citizenship should not be removed due to the sanctions but due to the “many indications of fraud associated with the certification process of alleged Sephardic descendants”.

Batalha as well as other activists, commentators and politicians have repeatedly said the law offering naturalisation to descendants of Sephardic Jews must be reviewed as they believe it is being used by oligarchs to get a foothold in the EU.

Applicants’ genealogies are vetted by experts at one of Portugal’s Jewish centres, Lisbon or Porto. The Porto centre was responsible for Abramovich’s process. They have repeatedly denied wrongdoing.

“It is obvious that a person’s citizenship cannot be withdrawn just like that…that’s why citizenship…is so desirable and sought after by oligarchs. It provides a high level of protection,” said Susana Coroado, president of the Portuguese branch of Transparency International. “But that’s also why it can’t be ‘sold’.”