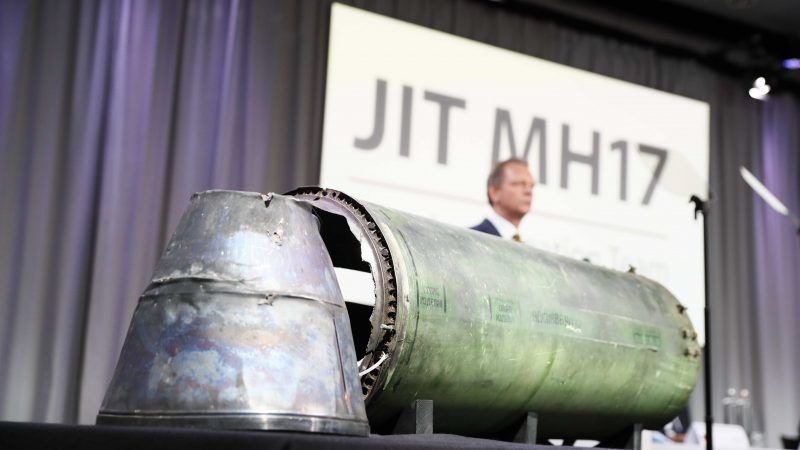 A view of a damaged missile as head prosecutor Fred Westerbeke (back) speaks during a press conference of the Joint Investigation Team (JIT) on the ongoing investigation of the Malaysia Airlines MH17 crash in 2014, in Bunnik, The Netherlands, 24 May 2018. [Robin Van Lonkhuijsen/EPA/EFE]

The airliner flying from Amsterdam to Kuala Lumpur was hit by a Russian-made “Buk” anti-aircraft missile on 17 July 2014 over territory held by pro-Russian separatists. There were no survivors. Two-thirds of those killed were Dutch.

“The Buk that was used came from the Russian army, the 53rd brigade,” Chief Dutch Prosecutor Fred Westerbeke told Reuters. “We know that was used, but the people in charge of this Buk, we don’t know.”

“All the vehicles in a convoy carrying the missile were part of the Russian armed forces”, Westerbeke said.

A Joint Investigation Team, drawn from Australia, Belgium, Malaysia, the Netherlands and Ukraine, is gathering evidence for a criminal prosecution over the downing of the plane.

Incredibly proud my findings that the Buk that shot down MH17 came from Russia’s 53rd Brigade have been confirmed by official investigation. https://t.co/3ZM6STs1vp
Huge recognition for all the team @bellngcat

Russia repeated on Thursday that it had nothing to do with the incident.

“Not a single air defense missile launcher of the Russian Armed Forces has ever crossed the Russian-Ukrainian border,” Russia’s TASS news agency quoted the Defence Ministry as saying in a statement.

Russia’s Foreign Ministry said the findings had been based on fake data presented by bloggers and that Moscow’s information regarding the case had been largely ignored.

“This is an example of baseless accusations aimed at discrediting our country in the eyes of the international community,” the ministry added.

Russia says it has provided evidence that Ukrainian Buk systems were involved in the downing of MH17.

The US State Department said on Thursday the United States had “complete confidence” in the findings and called on Russia to admit its involvement.

“It is time for Russia to cease its lies and account for its role in the shoot down,” spokeswoman Heather Nauert said in a statement.

I commend the professional, independent work of the Joint Investigation Team on #MH17. As the UN Security Council concluded, those responsible must be held to account. Almost four years since this global tragedy, it is important that justice is served.

Commission calls on Russia to cooperate

Asked by EURACTIV to comment, Commission spokesperson Maja Kocijancic said that the EU fully supports the work of the Joint Investigation Team.

“To ensure accountability and justice the ongoing criminal investigation needs continuing support of the international community. In addition to the earlier findings, the Joint Investigation Team concluded that the Buk installation belonged beyond doubt to the Russian armed forces and stated that the Russian Federation has not provided answers to its questions about this Buk installation, and in view of these facts, we call on the Russian Federation to fully cooperate with all efforts to establish accountability for the downing of MH17 in line with UNSC Resolution 2166,” Kocijancic stated.

The Dutch Safety Board concluded in an October 2015 report that the Boeing 777 was struck by a Russian-made Buk missile.

Investigators appealed to the public to come forward and help identify members of the crew who operated the missile and determine how high up the chain of command the order originated.

“The Russian Federation didn’t help us in providing us the information we brought out into the open today,” Westerbeke said. “They didn’t give us this information, although a Buk from their military forces was used.”

Prosecutors showed photos and videos of a truck convoy carrying the system as it crossed the border from Russia to Ukraine. It crossed back several days later with one missile missing. The vehicles had serial numbers and other markings that were unique to the 53rd Brigade, an anti-aircraft unit based in the western Russian city of Kursk, they said.

The JIT presents what they call the "fingerprint" of the Buk that downed MH17, referring to 7 features visible on the Buk (e.g. paint, damage on side skirt, etc).
Idiot Russian MP thinks they are talking about literal human finger prints, and says that their work is a "fake". pic.twitter.com/n6Iyxe9hZH

In the interim update on their investigation, prosecutors said they had trimmed their list of possible suspects from more than a hundred to several dozen.

Westerbeke said investigators were not yet ready to identify individual suspects publicly or to issue indictments, but that when they do he expects cooperation, or a firm international political response.

Dutch Prime Minister Mark Rutte cut short a trip to India to return in time for a cabinet meeting on Friday to discuss the latest findings in the inquiry.

The MH17 Disaster Foundation representing families of the victims demanded that the Dutch government take legal action to hold the Russian state accountable.

“It must go beyond legal exploration after this,” board member Piet Ploeg was quoted by broadcaster NOS as saying.

Ukrainian Army General Vasyl Hrytsak, a member of the investigation team, told Reuters the next crucial step would be to pinpoint who issued the orders to move the missile system.

French President Emmanuel Macron, who is on a visit to St Petersburg, pressed Russia to deal constructively with the Dutch investigation.

Putin, asked about the finding today that the Russian military deployed the missile that downed #MH17:
"What plane are your talking about?"
Then asks why Russia isn't part of the investigation. (Answer: Because Russian citizens weren't killed in the crash) pic.twitter.com/j5qXXbLfbr