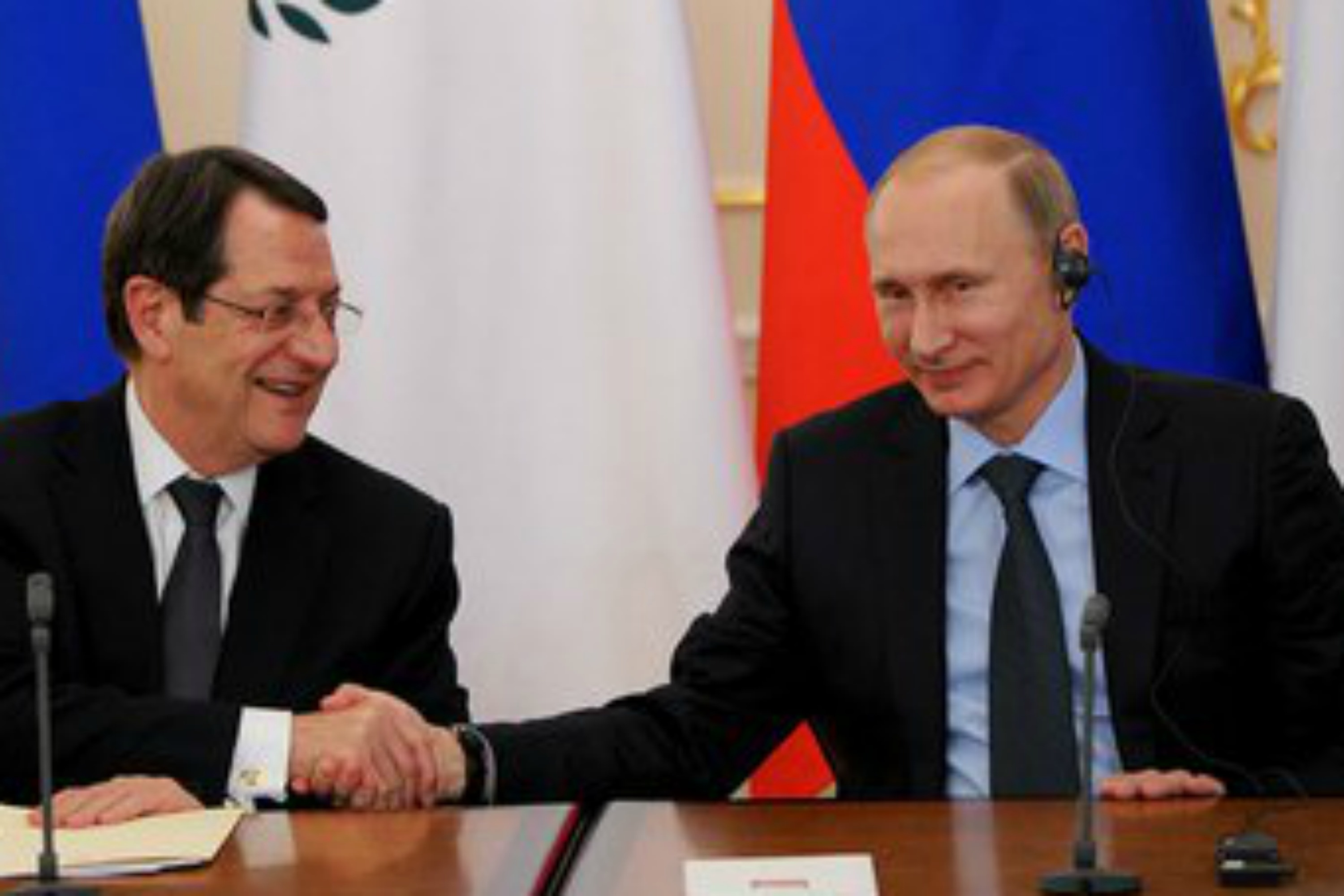 Anastasiades and Putin, in Moscow. [The Kremlin]

Cyprus President Nicos Anastasiades, who is on an official visit to Moscow, applauded with his host and counterpart Vladimir Putin, the many ties linking the two countries.

In his remarks, Putin said that Russian investment in Cyprus was at 80% of the total for the small island country, amounting to $33 billion.

Cyprus is in second place in terms of investment in Russia’s economy, with $65 billion, Putin stated. He added: “We know that a large part of this was repatriated capital, but that it is coming via Cyprus is already not a bad thing. It is good when our money comes back to work in our economy.”

Russian oligarchs place their money in Cyprus, and the same funds return to Russia as “foreign investment”. Large depositors in Cyprus, including many Russians, were hit in 2013 by a haircut of 47.5% on their savings. At that time, Russia provided a $2.5 billion loan to Cyprus to help stabilise the country’s banking system, Putin recalled.

“Russia will continue to help Cyprus recover from the consequences of the debt crisis,” Putin said, also mentioning that Sberbank, one of the largest banks in Europe, in which the Russian government has a majority stake, is working actively on the market in Cyprus.

Russian Commercial Bank, a subsidiary of VTB Bank, is one of the country’s three biggest credit and financial institutions. What’s more, Putin said, VTB Capital, one of the top investment banks in Russia. Together with Cyprus’ Finance Ministry, it successfully organised the first issue of sovereign Cyprus Eurobonds since the crisis, raising a total of €750 million.

“We think that the Russian Federation has thus made a positive contribution to normalising the situation in the eurozone after the difficult period in 2011-2013,” Putin said.

The Russian leader added that Cyprus is one of the most popular destinations for Russian tourists, who need no visa to visit the EU country. More than 600,000 Russians visited the island last year, an increase of nearly 5%, he said.

Anastasiades praised the cooperation with Russia, and thanked Putin for the renegotiation of the terms of the €2.5 billion credit. He regretted that the Ukraine crisis necessitated the adoption of sanctions by the EU vis-à-vis Russia.

According to the transcript of the presser published by the Kremlin website, Anastasiades also expressed his country’s determination “in favour of creating more favorable conditions, so that as soon as possible the military cooperation between Moscow and Brussels be restored, in order to achieve common goals for the benefit of all the peoples of both the European Union and the Russian Federation”.

“Dear Mr. President! I believe that my visit to Moscow is a mark for further development of the exclusive relationship between the Russian Federation and Cyprus, and the results of our meetings today confirm, as I believe, the historical, cultural and religious ties between our two countries, ties that are tested by time and which do not subject to challenges. They are indicative of the level of friendship and cooperation between our governments and peoples,” Anastasiades said, as quoted.

The President of Cyrus accepted to an invitation to the 70th anniversary of Victory Day in World War II, in Moscow, on 9 May.