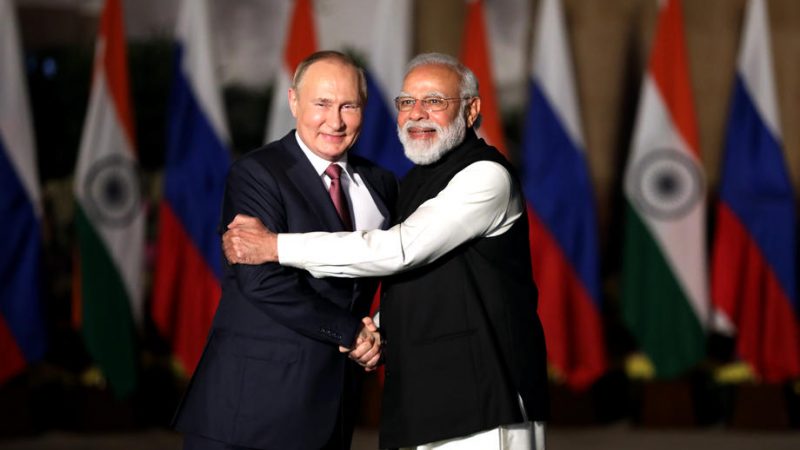 Indian Prime Minister Narendra Modi met Russian President Vladimir Putin in New Delhi on Monday (6 December), with trade and the deteriorating situation in Afghanistan both on the agenda.

Afghanistan’s takeover by the Taliban earlier this year has led to a humanitarian crisis in the country, which New Delhi and Moscow have both previously said risks destabilising the region.

“The fight against terrorism is also a fight against drug trafficking and organised crime,” Putin said in introductory remarks broadcast by Indian media. “In that regard, we are concerned about developments of the situation in Afghanistan.”

According to the Kremlin website, Modi made the remark that this was only the second visit abroad of Putin in two years, which he added “speaks about your love for India”.

“Over the past several decades, there have been many fundamental changes, changes in the world arena, various geopolitical formations have emerged, but among all these changes, what has remained unchanged is Russian-Indian friendship”, Modi said, according to the transcript.

“And I am sure that the programs we spoke about will be implemented, including the training of an Indian cosmonaut”, he added.

The visit by Putin and several top Russian officials comes amid increasingly strained relations between Russia and the United States, also a key Indian ally.

Earlier on Monday, Russian Foreign Minister Sergei Lavrov said a deal to supply India with S-400 air defence missile systems was being implemented despite what he said were US efforts to undermine the accord.

India and Russia are expected to cement several trade and defence pacts at the summit.

“The relation between India and Russia is truly a unique and reliable model,” Modi said.