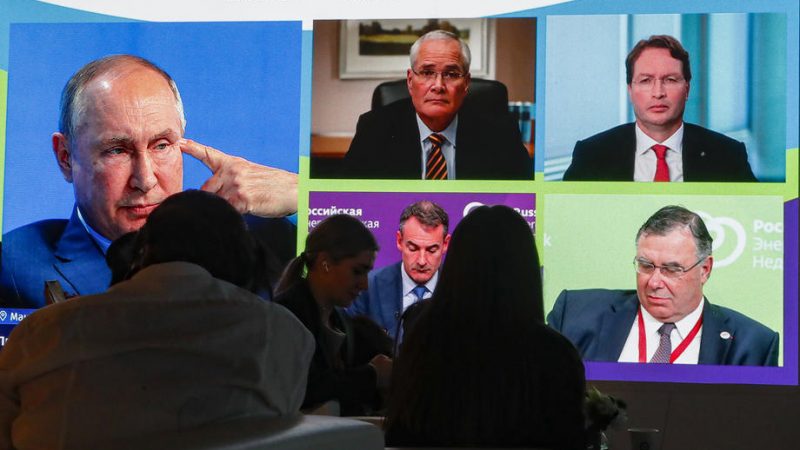 Russian President Vladimir Putin said on Wednesday (13 October) that the reason for the current energy price spike is the shortage of electricity due to increased use of renewable energy.

Speaking at the opening of “Russia energy week” in Moscow, Putin said Russia was ready to provide more gas to Europe if requested, thus rejecting the suggestion that Moscow was squeezing supplies for political motives.

Focusing on the impact of the crisis caused by the COVID-19 pandemic, Putin said that last year’s statistics show that global primary energy consumption declined by 4.7%, which he said was the heaviest shock for the sector over the past 70 years.

Consequently, he said prices had been adjusted to the falling demand, giving an example of last year, when the price of natural gas in Europe dropped by 60% to $113 per thousand cubic metres against $159 in 2019 and $282 in 2018.

Putin called the situation in the oil sector “unique”.

“None of you or us could even believe it. Nobody could even imagine that last spring oil would record negative prices for the first time in history. It became more expensive to store oil than to purchase it. This situation is simply unique,” he said.

He then discussed the situation with the gas market in Europe, which in his words, does not yet look balanced and predictable. The main reason, he said, is that “not everything in this market depends on producers: gas consumers are playing an equal and even bigger role”.

Putin further said that he would say a few things that may sound obvious and commonplace, “but various persons in charge have lately chosen to forget about them or keep silent about them, replacing an analysis of the situation with empty political slogans”.

He said that over the past 10 years, the share of renewable energy sources in the European energy balance had skyrocketed, which at first sight appeared as “a good thing”.

However, he said that this sector was notorious for erratic power generation. In the event of major generation failures, primarily due to bad weather, this reserve was simply not large enough to cover the demand.

“This is exactly what happened this year, when, due to a decrease in wind farm generation, there was a shortage of electricity on the European market. Prices soared, which triggered a spike in natural gas prices on the spot market”.

Putin also appeared to blame EU countries for not having planned to stock enough gas. He said gas reserves are usually replenished in the summer to meet the winter demand.

“However, this year, even after a cold winter in Europe, many countries chose not to do so, relying on spot gas supplies and the “invisible hand” of the market, but a spike in demand has sent prices even higher”, he said, according to the transcript by the Kremlin.

Putin stressed that “the rise in natural gas prices in Europe stemmed from shortages of electricity, not the other way around” and rejected suggestions that Russia manipulated or influenced the price spike. Conversely, he blamed EU policies for the negative developments.

“There is no need to lay the blame on other people, which is what some of our partners are trying to do. Occasionally, you get stunned by what is being said on this account, as if these people do not know the numbers […], they do not see the reality and are just covering up their own mistakes. Systemic flaws have been gradually introduced in European energy over the past decade, which led to a major market crisis in Europe,” Putin said.

He further stressed that Russia fulfilled its contractual obligations to its partners “in full, including its partners in Europe, ensuring guaranteed, uninterrupted gas supplies in this direction”.

“We are seeing conditions that will result in record-high volumes of gas distribution to the global market by year-end. Moreover, we are always willing to meet our partners halfway and are ready to discuss additional actions”, he added.

The Russian president did not omit to mention the new pipelines, TurkStream and Nord Stream 2, stressing their contribution to reducing greenhouse gas emissions.

“Just for your information: the carbon intensity of Russian natural gas distribution along the Nord Stream 1 pipeline is 66.7% lower than that of US LNG,” Putin said.

Europe could not count on US liquefied natural gas in the recent period because the US sells its gas to the Asian markets where the prices are much higher than in Europe.