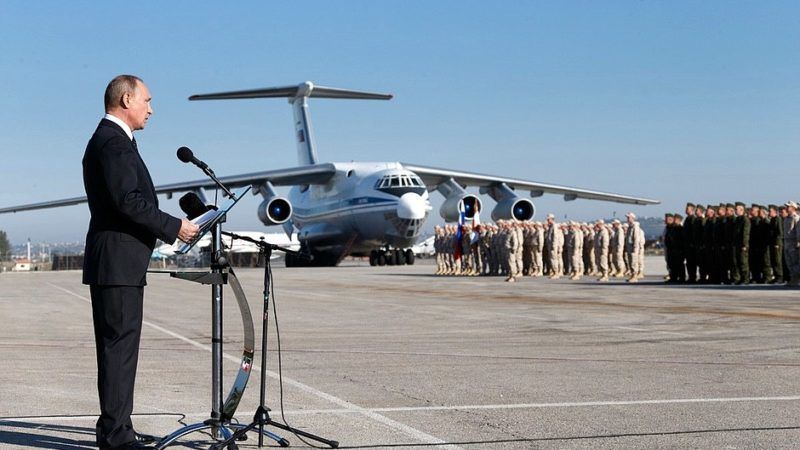 Russian President Vladimir Putin during a surprise visit on 11 December to Russia’s Hmeymim air base in Syria. [The Kremlin]

Russian President Vladimir Putin during a surprise visit on Monday to Russia’s Hmeymim air base in Syria, declared that the work of Russian forces was largely done in backing the Assad government against militants, following the defeat of “the most battle-hardened group of international terrorists.”

De Mistura, asked what signal Putin could give from his position of force, said: ”Convince the (Syrian) government that there is no time to lose…. You can think you win territory militarily but you have to win the peace.

Putin embraces Assad for 2nd time in less than a month, today at Khmeimim air base in Syria. pic.twitter.com/pPKKctt5Yv

“And to win the peace, you have to have the courage to push the government to accept that there has to be a new constitution and new elections, through the United Nations,” he said.

The nearly seven-year civil war in Syria has killed hundreds of thousands of people and driven more than 11 million from their homes. All previous diplomatic efforts to resolve the conflict have ended in failure over the opposition’s demand that President Bashar al-Assad leave power and his refusal to go.

The Kremlin first launched air strikes in Syria in September 2015 in its biggest Middle East intervention in decades, turning the tide of the conflict in Assad’s favor.

Now that it regards that mission complete, Putin wants to help broker a peace deal and is keen to organize a special event in Russia – a Syrian Congress on National Dialogue – that Moscow hopes will bring together the Syrian government and opposition and try to hammer out a new constitution.

But De Mistura made clear that peace negotiations must be through the United Nations in Geneva, as mandated by the UN Security Council, adding: “Otherwise it is not worth it…. This is a complicated war, it is only in Geneva through the UN”

The UN envoy has conducted shuttle diplomacy between the Syrian government delegation led by chief negotiator Bashar al-Ja‘afari and a unified opposition delegation.

”The opposition told me clearly when they arrived here, and again yesterday and this morning too, that they are ready to meet the government right away to have a hard, difficult discussion.

“The government is not ready, it has said it is not ready to meet the opposition. That is regrettable but diplomacy has many means,” de Mistura said.

A senior Western diplomat said that the government delegation had failed to engage with de Mistura on a new constitution and elections during a round of negotiations due to end on Thursday.

“Clearly they did not have any intention to engage in this political process. And clearly they are not under sufficient pressure to do so,” the diplomat told Reuters. “The clear impression is the regime wants to avoid the UN-led political process at any cost.”