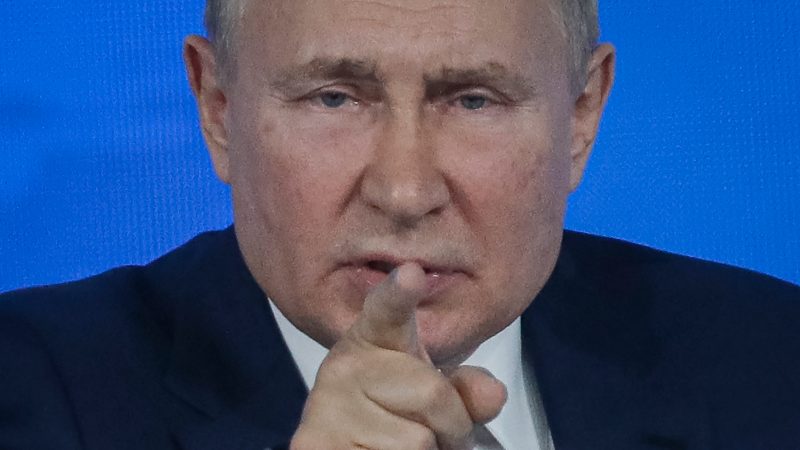 Russian President Vladimir Putin answers a question during his annual life-broadcasted news conference with Russian federal, regional, and foreign media at the Moscow Manege in Moscow, Russia, 23 December 2021. The President's Big Press Conference is an annual event that has been held since 2001. This year, the number of journalists was limited to 507 due to coronavirus. [EPA-EFE/YURI KOCHETKOV]

Russia wants to avoid conflict with Ukraine and the West, President Vladimir Putin said on Thursday (23 December), demanding an “immediate” response from the United States and its allies to Moscow’s demand for security guarantees.

“This is not our (preferred) choice, we do not want this,” Putin said at his annual news conference when asked about the possibility of conflict with Ukraine.

He said Russia had received a generally positive initial response to security proposals it handed to the United States this month and that negotiations would start early next year in Geneva.

“I hope the development of the situation will proceed along that path,” he said.

In a separate answer, Putin grew more heated when recalling how NATO had “cheated” Russia with successive waves of expansion since the Cold War, and said Moscow needed an answer urgently.

“You must give us guarantees, and immediately – now.”

Russia rejects Ukrainian and US accusations that it may be preparing an invasion of Ukraine as early as next month by tens of thousands of Russian troops poised within reach of the border.

It says it needs pledges from the West – including a promise not to conduct NATO military activity in Eastern Europe – because its security is threatened by Ukraine’s growing ties with the Western alliance as well as the possibility of NATO missiles being deployed against it on Ukrainian territory.

“We just directly posed the question that there should be no further NATO movement to the east. The ball is in their court, they should answer us with something,” Putin said.

The Russian president also argued that Ukraine was an artificial state created by Lenin in the 1920s, and that Russia was forced to annex Crimea, because of what he called the coup d’état in Ukraine.

He said that as a former chief of FSB, the Russian secret services, he received the reports of Russian double agents who told him about the plans of the West to destabilise and wreck Russia by helping terrorists in the North Caucasus.

Putin also said that even if Ukraine would not be dragged into NATO, there were plans to establish there on a bilateral basis military bases and offensive systems of armaments.

He made clear he did not see President Volodymr Zelenskiy as a negotiating partner, accusing him of falling under the influence of what he called radical nationalist forces.

“How can I build a relationship with the current leadership, given what they are doing? It’s practically impossible,” he said.

Putin accused Ukraine of breaking its commitments under the 2015 so-called Minsk Agreement meant to halt fighting in its eastern Donbass area between Ukrainian and pro-Russian forces, and refusing to talk to representatives of two breakaway regions there.

Ukraine’s foreign ministry said Kyiv, on the contrary, had done “titanic work” to bring about a new ceasefire agreement in the east on Wednesday. The Ukrainian military reported, however, that the “armed formations of the Russian Federation” had violated the latest truce three times in the course of Thursday, including with mortars and heavy grenade launchers.

There were no casualties from those incidents, it said.

Four sources have told Reuters that Russian mercenaries have deployed to separatist-controlled eastern Ukraine in recent weeks to bolster defences against Ukrainian forces.

Swedish Foreign Minister Ann Linde, chair of the Organisation for Security and Cooperation in Europe (OSCE) which has a monitoring mission in the conflict zone, called the ceasefire a “small but important first step towards de-escalation along the contact line”.

The Biden administration official also welcomed the move, but called it a “small step.”

“It’s possible that in case of escalation (in Ukraine), or, if we see that Belarus could be finally occupied (by Russia), extra NATO troops could be deployed in Lithuania.” he told Lithuanian news website 15min.

Rupsys said Belarus armed forces were no longer operating independently, while the country’s air defence system had been fully integrated with Russian one, and Belarus could be “fully occupied” in the near future.