Russian President Vladimir Putin, speaking ahead of the G8 Summit in Northern Ireland on 17-18 June, said his country would not follow the mistakes of Europe that led to the eurozone crisis. In a wide-ranging interview he blamed the EU’s "mentality” for endangering the economy and the “moral basics of society”.

In an interview with Russian agency RIA Novosti and shared with EURACTIV, Putin calls for a thorough reform of the International Monetary Fund (IMF), spells out measures to tackle tax havens and blames Europe for what he calls its “dependency mentality”.

Asked if Europe’s welfare state model can be competitive today, Putin said Europe is living beyond its means, losing control of the economic situation and that Europe's structural distortions were "unacceptable" to Russia.

“Many European countries are witnessing a rise of [the] dependency mentality when not working is often much more beneficial than working. This type of mentality endangers not only the economy but also the moral basics of the society. It is not a secret that many citizens of less developed countries come to Europe intentionally to live on social welfare,” Putin said.

Putin, however, added that Russia should not reject the social welfare state of the EU, and insisted that his country saw it as “a necessity” to build a “social state”.

He argued that his government was working on striking a balance between decent salaries, an appropriate pension system and quality public services – including medical and educational services; and a reasonable budgetary policy and measures to stimulate the economy.

“Otherwise, people cannot be confident in the future, cannot trust the government, while it is essential for stable economic growth and national development. We can easily recall such a situation in the 1990s when many social obligations were not fulfilled and poverty was growing at a threatening pace,” he said, referring to the economic collapse under his predecessor Boris Yeltsin.

Putin blamed the IMF for “frequently” failing to keep pace with the rapidly changing situation in global financial markets.

“A good example is the global financial crisis, which the IMF system failed to prevent,” Putin said.

He called for a “thorough reform” of the IMF and its “adjusting to current economic realities”, by revising the IMF quota and voting system and enhancing the role of emerging countries, including Brazil, India, China and South Africa, known collectively as the BRICs.

Recently, the BRICs group announced a project to create their own development bank, replicating the Bretton Woods system of which the IMF is part.

Putin said his country would make 'maximum efforts’ to make progress in the IMF reform in the run-up of the G20 summit in Saint Petersburg on 5-6 September.

Putin also voiced determination to help strengthen cooperation on tax issues and curb the outflow of capital to offshore zones, one of the key topics of the summit.

“Russia proposes to conclude bilateral agreements with offshore and low-tax jurisdictions,” the Russian leader said. “Such documents should be aimed at countering illegal schemes of minimizing taxation, involve the exchange of tax information and implementation of universal recommendations developed within the framework of the OECD.”

Russia is not a member of the Organisation for Economic Co-operation and Development (OECD), but the organisation has been cooperating with Moscow since 1992. In 1996, Russia applied for membership and in 1997 the OECD countries acknowledged that Russia’s accession is “a shared ultimate goal of their co-operation.”

Putin made a short reference to the practice at G8 summits to pay “great attention” to promoting international development, especially in Africa. He said that the concept of such assistance was “significantly changing”, without elaborating. 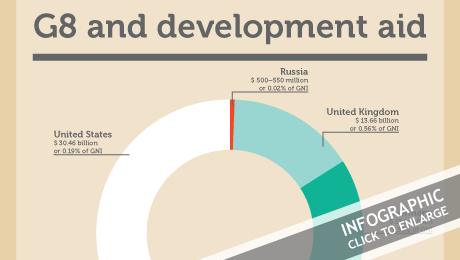 EURACTIV has found, however, that Russia’s contribution to development aid remained extremely modest compared to the other G8 countries. According to OECD, the volume of aid from the United States for 2012 amounted to $30.46 billion (€22.8 billion). Russian sources put the country’s figure for the same year at $500-550 million (€375-412 million).

Britain took over the one-year presidency of the G8 in January. Leaders from Canada, France, Germany, Italy, Japan, Russia, USA and UK will meet at Lough Erne in Northern Ireland for the G8 Summit 17-18 June.

The G8 forum originated with a 1975 summit hosted by France that brought together representatives of six governments: France, West Germany, Italy, Japan, the United Kingdom, and the United States, thus leading to the Group of Six or G6. The summit became known as the Group of Seven or G7 the following year with the addition of Canada. In 1997, Russia was added to the group which then became known as the G8.

The EU is represented in the G8, but cannot chair G8 summits.