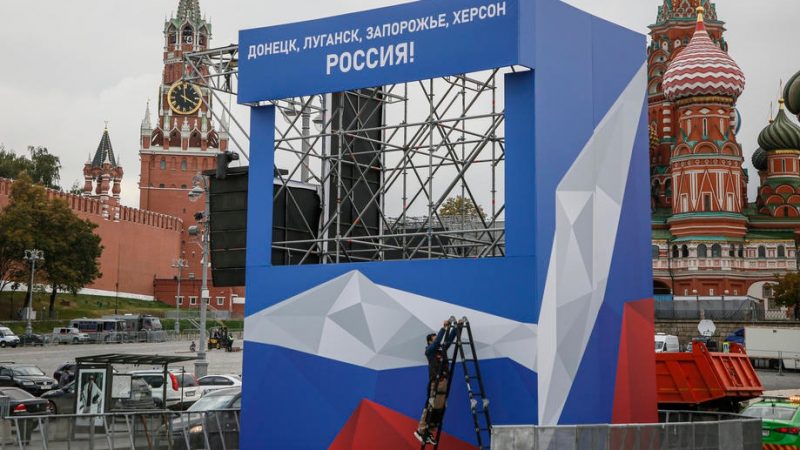 A worker assemblies a stage featuring a sign reading 'Donetsk, Lugansk, Zaporozhye, Kherson, RUSSIA' during preparations for a celebration in front of St. Basil's Cathedral and Moscow Kremlin in downtown of Moscow, Russia, 29 September 2022. [EPA-EFE/SERGEI ILNITSKY]

Russian President Vladimir Putin is set to host a Kremlin ceremony on Friday (30 September) annexing four regions of Ukraine, while his Ukrainian counterpart said Putin would have to be stopped for Russia to avoid the most damaging consequences of the war.

There was a warning too from United Nations chief António Guterres, who said the planned annexations were a “dangerous escalation” and jeopardise prospects for peace.

Putin has doubled down on the invasion he ordered in February despite suffering a major reversal on the battlefield this month and discontent in Russia over a widely criticised “partial mobilisation” of thousands more men to fight in Ukraine. Russia continues to call the war a “special operation.”

“The cost of one person in Russia wanting to continue this war is that Russian society will be left without a normal economy, a worthwhile life, or any respect for humanitarian values,” Ukrainian President Volodymyr Zelenskyy said in a Thursday evening address.

“It can still be stopped. But to stop it we have to stop that person in Russia who wants war more than life. Your lives, citizens of Russia,” said Zelenskyy, who earlier spoke of Ukraine delivering a “very harsh” reaction to Russian recognition of so-called referendum results.

Moscow plans annexation of eastern and southern provinces after what Ukraine and Western countries said were sham votes staged at gunpoint in Russian-occupied areas of Donetsk, Luhansk, Kherson and Zaporizhzhia. The territory Russia controls amounts to more than 90,000 square km, or about 15% of Ukraine’s total area – equal to the size of Hungary or Portugal. 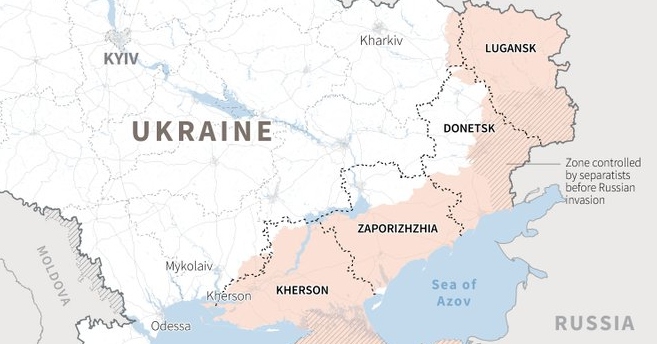 Russia readies annexation of territory as big as Portugal

Russian-installed officials in four occupied regions of Ukraine reported huge majorities of votes in favour of joining Russia as the United States planned a UN resolution condemning the referendums as shams and Russia remained defiant.

Putin took the intermediary step of signing decrees on Thursday paving the way for occupied regions of Kherson and Zaporizhzhia to be formally annexed into Russia. The decrees were made public by the Kremlin.

Zelenskyy promised a strong response to the annexations and summoned his defence and security chiefs for an emergency meeting on Friday where “fundamental decisions” will be taken, an official said.

On the eve of the planned ceremony in the Georgievsky Hall of the Great Kremlin Palace and a concert in Red Square, Putin said that “all mistakes” made in a call-up announced last week should be corrected, his first public acknowledgment that it had not gone smoothly.

Thousands of men have fled Russia to avoid a draft that was billed as enlisting those with military experience and required specialities but has often appeared oblivious to individuals’ service record, health, student status or even age. 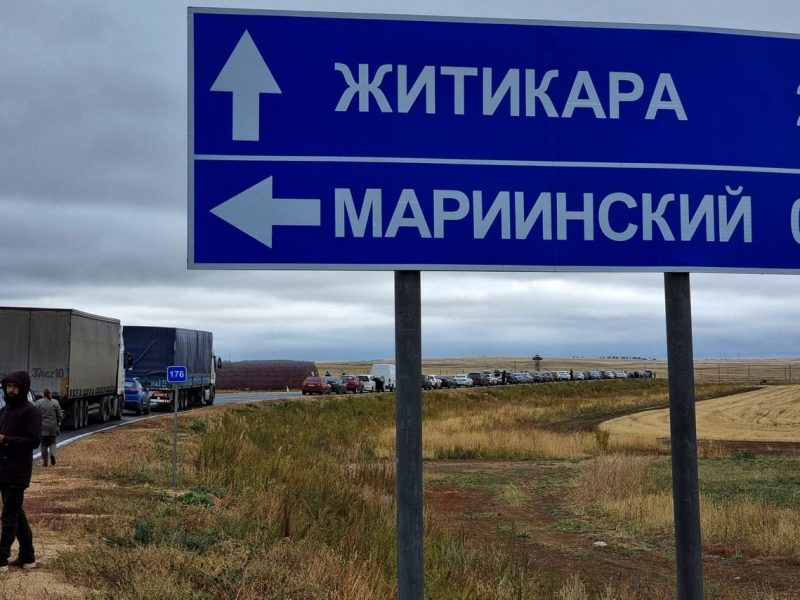 Some 100,000 Russian draft-dodgers welcomed to Kazakhstan, and a speech reinforcing the importance of territorial integrity delivered by President Kassym-Jomart Tokayev on Tuesday (27 September) highlighted a growing distance between the former Soviet state and Russia.

There have been widespread public expressions of discontent from officials and citizens over the way the mobilisation has been handled, including complaints about enlistment officers sending call-up papers to clearly ineligible men.

“In the course of this mobilisation, many questions are coming up, and all mistakes must be corrected and prevented from happening in the future,” Putin said.

“For example, I’m thinking of fathers of many children, or people suffering from chronic diseases, or who those who are already past conscription age.”

Russia says the referendums, ostensibly asking people in the four regions whether they wanted to be part of Russia, were genuine and showed public support.

The EU and the Western community condemn the sham referendums, vowing never to recognise these areas as anything but a part of Ukraine. The West vowed to support Ukraine’s efforts to restore its territorial integrity as long as necessary.

Washington and the EU are set to impose additional sanctions on Russia over the annexation plan, and even some of Russia’s close traditional allies, such as Serbia and Kazakhstan, say they will not recognise the move.

Kremlin spokesman Dmitry Peskov did not say whether Putin would attend the Red Square concert, as he did a similar event in 2014 after Russia proclaimed it had annexed Ukraine’s Crimea region.

A stage has been set up on the Moscow square with giant video screens and billboards proclaiming the four areas part of Russia.

“Any decision to proceed with the annexation … would have no legal value and deserves to be condemned,” United Nations Secretary General Guterres told reporters.

US President Joe Biden said the United States would never recognise Russia’s claims on Ukraine’s territory, denouncing the referendums. “The results were manufactured in Moscow,” Biden said at a conference of Pacific Island leaders on Thursday.

Russian government officials have said that the four regions will fall under Moscow’s nuclear umbrella once they have been formally incorporated into Russia. Putin has said he could use nuclear weapons to defend Russian territory if necessary.

After the annexations, Russia will consider any attempt by Ukraine to regain its territories as an attack on its soil. The Russian military doctrine allows the use of nuclear weapons if the very existence of Russia is threatened. 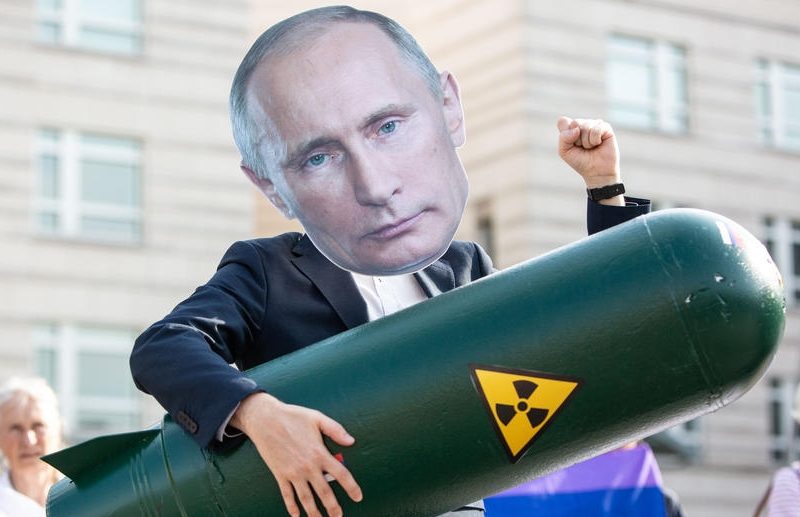 Truth or bluff? Why Putin's nuclear warnings have the West worried

President Vladimir Putin’s latest warning that he is ready to use nuclear weapons to defend Russia amid the war in Ukraine has made a troubling question much more urgent: Is the former KGB spy bluffing?

What Russia is billing as a celebration comes after Moscow has faced its worst setbacks of the seven-month-old war, with its forces routed in Ukraine’s northeast Kharkiv region.

Military experts said Russia annexed the four regions, because it was losing them on the battlefield.

“Our situation (in Luhansk region) is more difficult than in the Kharkiv region. There is no effect of surprise here,” Luhansk regional governor Serhiy Gaidai said on Thursday. “They (the Armed Forces of Ukraine) are advancing. And I hope we will receive very positive news in the near future.”

Some military experts say Kyiv is poised to deliver another major defeat, gradually encircling the town of Lyman, Russia’s main remaining bastion in the northern part of Donetsk province.

“The most difficult area for us remains (Lyman). Allied forces are holding their ground. And given that reinforcements will be coming, I believe we will make a breakthrough there,” Denis Pushilin, leader of the separatist Donetsk People’s Republic, said on Telegram.