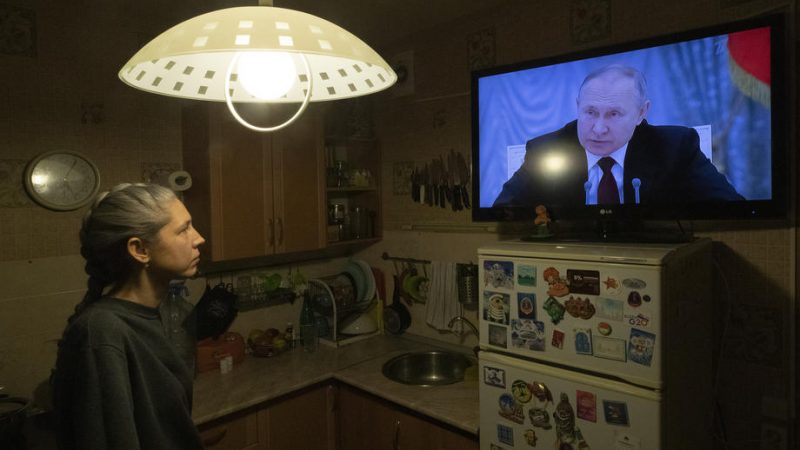 Kosovo is following in the footsteps of a number of EU states who have taken similar action against Russian media. [EPA-EFE/Anatoly Maltsev]

The lengthy televised speech of Russian President Vladimir Putin on Monday (21 February) in which he recognised the two separatist regions of Donetsk and Lugansk as independent, provides an opportunity to judge his rationale – and possibly to second-guess his attitude concerning other parts of the former Soviet empire.

EURACTIV takes a closer look at Putin’s views, with selected quotes focusing on distortion of history, without commentary. Putin’s world will be the theme of one of our subsequent Briefs.

‘Ukraine was entirely created by Russia’

“I’ll start with the fact that modern Ukraine was entirely created by Russia, more precisely, Bolshevik, communist Russia. This process began almost immediately after the revolution of 1917, and Lenin and his associates did it in a very rude way towards Russia itself – by separating, tearing away from it part of its own historical territories. Of course, no one asked about anything to the millions of people who lived there.”

“Then, on the eve and after the Great Patriotic War, Stalin already annexed to the USSR and transferred to Ukraine some lands that previously belonged to Poland, Romania and Hungary. At the same time, as a kind of compensation, Stalin endowed Poland with part of the original German territories, and in 1954 Khrushchev for some reason took away Crimea from Russia and also gave it to Ukraine. Actually, this is how the territory of Soviet Ukraine was formed.”

“As a result of the Bolshevik policy, Soviet Ukraine arose, which even today can with good reason be called “Ukraine named after Vladimir Ilyich Lenin.” He is its author and architect. This is fully confirmed by archival documents, including Lenin’s harsh directives on the Donbas, which was literally squeezed into Ukraine. And now “grateful descendants” have demolished monuments to Lenin in Ukraine.”

“Russia itself, being in the most difficult situation at that time, helped its partners in the Community of Independent States (CIS), including Ukrainian colleagues, from whom, right from the moment of independence, numerous requests for material support began to arrive. And our country provided such support with respect for the dignity and sovereignty of Ukraine.”

“According to expert estimates, which are confirmed by a simple calculation of our energy prices, the volume of soft loans, economic and trade preferences that Russia provided to Ukraine, the total benefit for the Ukrainian budget for the period from 1991 to 2013 amounted to about $250 billion.”

“But this is not all. By the end of 1991, the debt obligations of the USSR to foreign states and international funds amounted to about $100 billion And initially it was assumed that these loans would be returned by all the republics of the former USSR in solidarity, in proportion to their economic potential. However, Russia took upon itself the repayment of the entire Soviet debt and paid it off in full, completing this process in 2017.”

“Ukrainian authorities preferred to act in such a way that they would have all the rights and advantages in relations with Russia but not incur any obligations. Instead of partnership, dependency began to prevail, which on the part of the Kyiv authorities sometimes acquired an absolutely unceremonious character. Suffice it to recall the permanent blackmail in the field of energy transit and the banal theft of gas.”

“From the very beginning, I would like to emphasise this, it was from the very first steps that the Ukrainian authorities began to build their statehood on the denial of everything that unites us, they sought to distort the consciousness, the historical memory of millions of people, entire generations living in Ukraine. Not surprisingly, Ukrainian society faced the rise of extreme nationalism, which quickly took the form of aggressive Russophobia and neo-Nazism. Hence the participation of Ukrainian nationalists and neo-Nazis in terrorist gangs in the North Caucasus, and the increasingly louder territorial claims against Russia.”

“External forces also played their role, which, with the help of an extensive network of NGOs and special services, grew their clientele in Ukraine and promoted its representatives to power.”

“It is also important to understand that Ukraine, in fact, has never had a stable tradition of its true statehood. And starting from 1991, she took the path of mechanical copying of other people’s models, cut off from both history and Ukrainian realities. Political state institutions were constantly reshaped to suit the rapidly formed clans with their own selfish interests, which had nothing to do with the interests of the people of Ukraine.”

“The whole point of the so-called pro-Western civilisational choice of the Ukrainian oligarchic government was and is not to create better conditions for the well-being of the people, but to obsequiously render services to Russia’s geopolitical rivals, to save billions of dollars stolen from Ukrainians and hidden by oligarchs in accounts in Western banks.”

“A stable statehood in Ukraine has not developed, and political, electoral procedures serve only as a cover, a screen for the redistribution of power and property between various oligarchic clans.”

“Corruption, which, without a doubt, is a challenge and a problem for many countries, including Russia, has acquired some kind of special character in Ukraine. It literally permeated and corroded Ukrainian statehood, the entire system, all branches of power.”

The US and the Maidan ‘coup d’état’

“The radicals took advantage of the justified discontent of the people, saddled the protest and in 2014 brought the Maidan to a coup d’état. At the same time, they received direct assistance from foreign states. According to reports, the material support of the so-called protest camp on Independence Square in Kyiv from the US Embassy amounted to one million dollars a day. Additional very large sums were impudently transferred directly to the bank accounts of opposition leaders. And it was about tens of millions of dollars. And how much did the really injured people, the families of those who died in the clashes provoked on the streets and squares of Kyiv and other cities, receive in the end? It’s better not to ask about it.”

“Maidan did not bring Ukraine closer to democracy and progress. Having carried out a coup d’état, the nationalists and the political forces that supported them finally brought the situation to a standstill, pushed Ukraine into the abyss of civil war. Eight years after those events, the country is split. Ukraine is experiencing an acute socio-economic crisis.”

The Western ‘promise of paradise’

“What happened? Why is all this happening? The answer is obvious: because the dowry, received not only from the Soviet era, but also from the Russian Empire, was squandered and taken into pockets. Tens and hundreds of thousands of jobs have been lost, which, thanks, among other things, to close cooperation with Russia, gave people a stable income and brought taxes to the treasury. Industries such as mechanical engineering, instrumentation, electronics, shipbuilding and aircraft building are either lying on their side or completely destroyed, and in fact they were once proud not only of Ukraine but of the entire Soviet Union.”

“In 2021, the Chernomorsky Shipbuilding Plant in Nikolaev was liquidated, where the first shipyards were laid down under Catherine II. The famous Antonov concern has not produced a single serial aircraft since 2016, and the Yuzhmash plant, which specialised in the production of rocket and space technology, was on the verge of bankruptcy, like the Kremenchug steel plant. This sad list goes on.”

“As for the gas transportation system, which was created by the entire Soviet Union, it is so dilapidated that its operation is associated with great risks and environmental costs.”

“And in this regard, the question arises: is poverty, hopelessness, the loss of industrial and technological potential – this is the very pro-Western civilisational choice that has been fooling and fooling millions of people for many years, promising them paradise?”

‘Robbery at behest of Western capitals’

“Maidan did not bring Ukraine closer to democracy and progress. In fact, it all came down to the fact that the collapse of the Ukrainian economy is accompanied by outright robbery of the citizens of the country, and Ukraine itself was simply driven under external control. It is carried out not only at the behest of Western capitals but also, as they say, directly on the spot – through a whole network of foreign advisers, NGOs and other institutions deployed in Ukraine. They have a direct impact on all the most important personnel decisions, on all branches and levels of government: from the central and even to the municipal, on the main state-owned companies and corporations, including Naftogaz, Ukrenergo, Ukrainian Railways, Ukroboronprom, Ukrposhta, Administration of Sea Ports of Ukraine.”

“There is simply no independent court in Ukraine. At the request of the West, the Kyiv authorities gave representatives of international organisations the pre-emptive right to select members of the highest judicial bodies – the Council of Justice and the Qualification Commission of Judges.”