Supporters of Istanbul Mayor Ekrem Imamoglu cheer as they wait for him during a protest against the rerun of Istanbul elections in Istanbul, Turkey, 06 May 2019. [EPA-EFE/ERDEM SAHIN]

After weeks of appeals by president Recep Tayyip Erdoğan’s AKP and their nationalist MHP allies, Turkey’s High Election Board (YSK) ruled on Monday (6 May) for a re-run of the Istanbul mayoral election, which was dramatically won by the main opposition CHP with a razor-thin majority.

It was the first time in 25 years that the AKP or its Islamist predecessors had failed to win control of Istanbul, Turkey’s largest city with a budget of close to $4 billion. Erdoğan launched his own political career as Istanbul mayor. 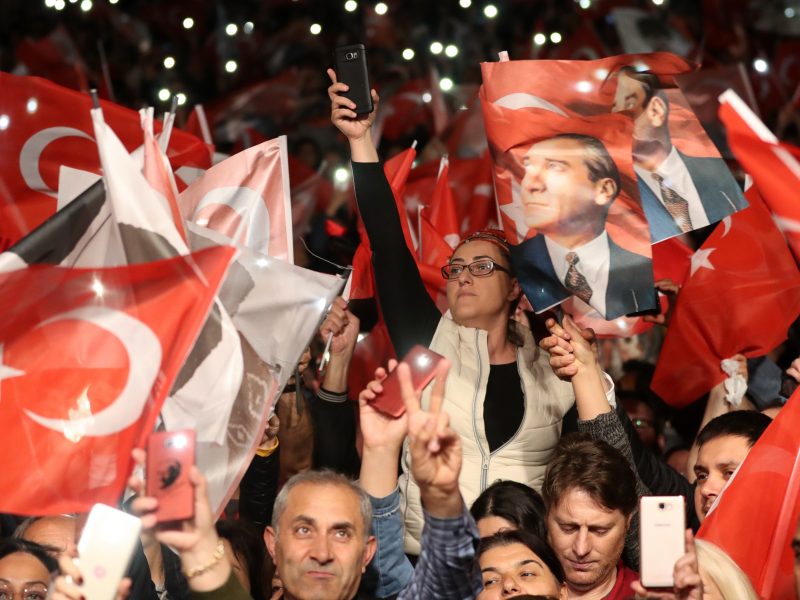 Both Erdoğan’s AKP and the main opposition CHP will field for the same candidate in the election re-run on 23 June.

However, the election strategies of each party have changed. This time, debate will center on the reason to re-run the Istanbul election.

The Republican People’s Party (CHP) appealed for all four of the votes and last year’s 24 June presidential and general elections to be annulled, saying that polling station officials had been appointed in the same way for both elections.

CHP’s candidate Ekrem İmamoğlu is portraying the election re-run as a battle for democracy in Turkey, maintaining since Monday’s ruling the upbeat and defiant tone of his original election campaign.

CHP will establish its election strategy on the grounds that the YSK’s ruling had no legal basis otherwise CHP’s appeal should be accepted and last year’s June 24 presidential and general votes must be annulled as well.

On the other hand, Erdoğan’s AKP will target almost 1,7 million voters who didn’t go to poll in March. AKP will underline their claim that individuals who were not public servants had been appointed to the polling stations amounted to organized crime.

Not only politicians but also Turkish people are aware that every vote counts after the candidate of Turkey’s main opposition Republican People’s Party (CHP) won the 31 March mayoral race in the city of some 15 million people by just 13,000 votes.

Istanbul residents are cancelling holiday bookings for the weekend of 23 June to ensure they can take part in a re-run of İstanbul’s mayoral election.

“We are in contact with 5,500 travel agencies and we have been informed that nearly all reservations departing from Istanbul (that weekend) have requested cancellation, almost 100 percent,” said Cem Polatoğlu, a spokesman for Travel Agencies Platform.

Airlines and travel agencies are allowing people to reschedule flights planned around that weekend for free.

Municipalities in some popular holiday resorts such as Bodrum have even put out spoof warnings to discourage Istanbul residents from visiting on that weekend.

Bodrum Municipality said in tongue-in-cheek travel advisory aimed at Istanbul residents. “As heavy snowfall is expected and the beaches will be shut on 23 June. Enjoy the sun which will raised in İstanbul on the same day,” said on its website and social media accounts.

The average summer temperature in the Aegean resort is around 30 degrees Celsius (86 degrees Fahrenheit) in the end of June.

The political allegiances of travelers who canceled their trips are not known but the coastal municipalities which issued the spoof travel warnings are held by the opposition CHP.

Turnout in Turkish elections tends to be much higher than in many Western countries. Some 84% of Istanbul’s registered 10.6 million voters cast their ballots in the March vote.