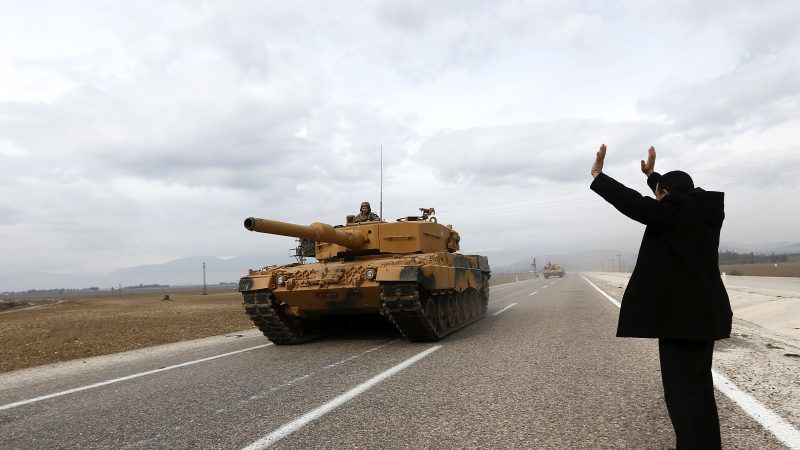 A man waves to Turkish soldiers on tanks near the Syrian-Turkish border, at Reyhanli district in Hatay, Turkey, 21 January 2018. [Sedat Suna/EPA/EFE]

Turkey’s last such cross-border operation – against the Islamic State extremist group and the Kurdish militia – was between August 2016 and March 2017.

Launched together with Syrian rebels, Turkish officials hailed its completion as a great success.

Ankara views the YPG and its Democratic Union Party (PYD) political wing as branches of the outlawed Kurdistan Workers’ Party (PKK) which has waged an insurgency inside Turkey since 1984.

It is blacklisted as a terrorist group by Turkey, the United States and the European Union.

But why has Ankara launched this offensive and what are the risks for Turkey?

Why is Turkey attacking Syria? https://t.co/UWNSU6LpBx

A Turkish official who did not wish to be named said the offensive “aims to liberate the area by eliminating the PKK-YPG-linked administration” in the region of Afrin, accusing the YPG of “repressing the local population through anti-democratic and authoritarian means”.

Turkish President Recep Tayyip Erdoğan said one objective was to give Afrin back to “its rightful owners” while Prime Minister Binali Yildirim said the offensive aimed to replace terror with peace in the region.

According to Max Hoffman, associate director and a Turkey expert at Center for American Progress, Turkey is “deeply unhappy” with the existing balance of power in northern Syria – where the regime and the Kurds are ascendant.

“Ankara fears that, effectively, a leftist Kurdish statelet deeply hostile to Turkey will be formalised on their southern border,” he said.

The militia has been a key ally of the US in its fight against IS, with Washington providing air cover as well as weaponry during the YPG’s fight to recapture IS strongholds in Syria last year.

Turkey pushes ahead with a ground offensive against Kurdish forces in northwest Syria—in defiance of the U.S. https://t.co/5D5bkbhufU pic.twitter.com/kBnmb4Qts8

The Turkish official said Turkey would learn from its 2016-17 operation in Syria dubbed Euphrates Shield.

“In our efforts to restore peace and stability in Afrin, we will draw from our experiences in Jarabulus, Azaz and Al-Bab,” the official said, referring to regions in Syria recaptured from IS during the operation.

The YPG is a disciplined and well-trained force, Aron Lund, a fellow with The Century Foundation, told AFP.

The Kurds “will surely put up hard resistance, but I don’t know how heavily armed they are and a determined Turkish attack is probably difficult to fend off,” he said.

Turkish Minister Nihat Zeybekci says territory in #Syria is entrusted to them by their grandfathers and #Turkey will restore Ottoman like order of peace, tranquility & brotherhood there. #Afrin pic.twitter.com/zBAhrYhAcw

“If Turkey decides to throw major resources at this battle, and Russia and (Syrian President Bashar al-) Assad stand aside, the balance of power does not look favourable to the Kurds,” Lund said.

He added the YPG was likely to do its best to create “diplomatic pressure” to bring Turkey’s attacks to an end.

“I cannot foresee that this operation will be easy,” Agar said, pointing to the thousands of YPG fighters in the region and around 250,000 civilians living there.

The Turkish army said it was taking every precaution to prevent harm to civilians.

Analysts say a critical factor will be whether the offensive has any effect on the peace process for Syria that has been backed by Turkey and Russia in recent weeks.

“Everybody has been watching to see if this connects to the preparations for the Russian-sponsored talks in Sochi or not,” Lund said, referring to peace talks to be held on 30 January in the Russian Black Sea resort.

While Moscow has a military presence in the area and a cordial relationship with the YPG, Hoffman suggested the offensive could strain those ties.

Referring to a statement from the PYD saying Russia was as much to blame for this attack as Turkey, Hoffman said the offensive could “drive a wedge” between Moscow and the YPG.

Hoffman added that if the offensive “goes well from Erdoğan’s perspective and he pushes on into Manbij or Kobane (towns in northern Syria), it could prompt an outright break with the US.”

But Lund said the operation may have domestic political ramifications if Ankara is trapped in a military or diplomatic quagmire over Afrin.

“Erdoğan is working hard to muster solid majorities in time for the very important Turkish elections of 2019,” he said.

“He’d be well served by a quick, neat military victory, but a fiasco would of course play into the hands of the opposition,” Lund said.